The inclusion of phone costs in monthly charges has allowed consumers to buy the latest smartphones for a fraction of the actual price. (Photo by Rie Ishii)
ISAO HORIKOSHI, Nikkei staff writerAugust 30, 2018 05:34 JST | Japan
CopyCopied

TOKYO -- Japan's three largest wireless carriers will simplify mobile contracts to encourage competition and fairness, but their changes are unlikely to answer demands from top government officials to lower prices for consumers.

SoftBank Group, KDDI and NTT Docomo intend to stop including device payments within their monthly service plans, a common practice that lets them offer steep discounts on phones. In some cases, subscribers have been able to get their hands on devices costing almost 100,000 yen ($900) for just 10,000 yen or so.

Japan's communications ministry takes issue with this scheme because it fails to promote competition for service charges.

The new plans will separate payments for devices and mobile services, with the carriers using the difference from higher phone prices to lower communication charges.

SoftBank said Wednesday it looks to charge 7,480 yen monthly before tax for a two-year plan offering 50 gigabytes of data, about 20% cheaper than current contracts. But an iPhone 8 with a 50% discount under a four-year payment plan now will cost 47,160 yen after tax, 250% more expensive than in existing plans. Such iPhone users will save only 2% when communication fees are considered. 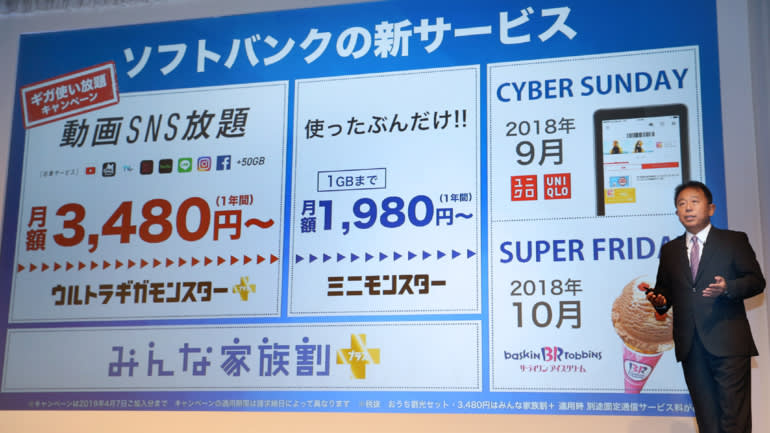 However, the new plans will benefit customers who use their phones for a long time. The existing scheme instead rewards those who frequently buy new devices.

Last year, KDDI and SoftBank tried to reduce phone prices with four-year plans that let users trade in for an upgraded device after two years and waive the remaining installments with another four-year deal. Though this produced room for discounts, Japan's Fair Trade Commission said the scheme restricts competition by discouraging customers from switching to other providers.

Chief Cabinet Secretary Yoshihide Suga refueled a debate on lowering Japan's wireless bills when he said last week that service charges could be reduced by about 40%. He cited a lack of competition as one of several problems facing the industry.

Japan's three largest mobile network operators have responded to government pressure in the past by introducing discount plans, creating complicated fee structures that they are now starting to simplify.