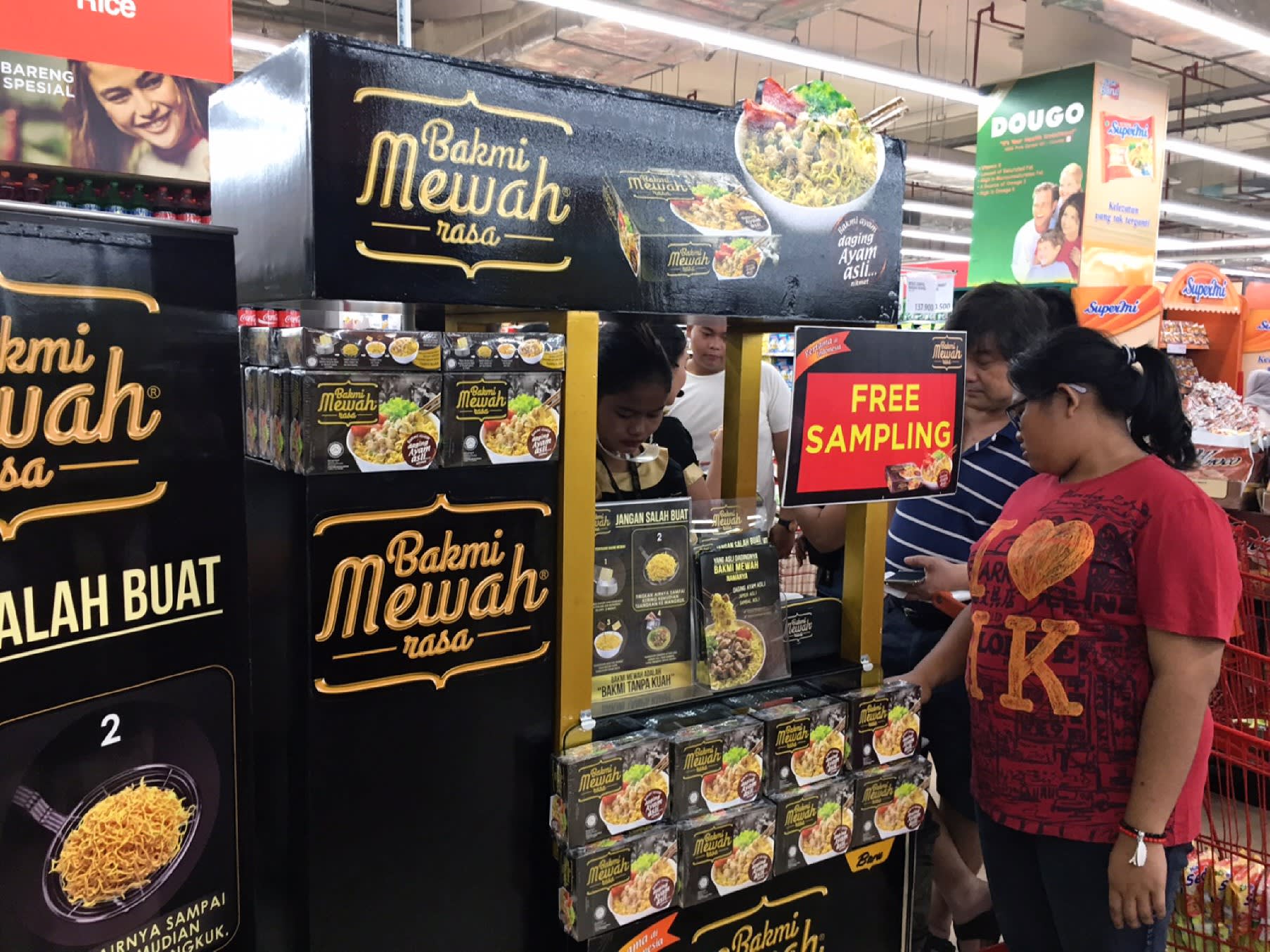 JAKARTA -- High-end instant noodles at triple the price of ordinary brands are becoming hugely popular in Indonesia. Consumers are particularly drawn to the simple luxury, albeit small, such semi-ready meals bring to the table.

As the country's economy grows, pushing up incomes, the public's enthusiasm for more expensive food is also building.

On a recent Sunday afternoon, people were forming a long line at a large supermarket in the capital city to try samples of "luxurious" instant noodles, which the salesperson said allows consumers to recreate the taste restaurants offer.

Bakmi Mewah, as the product is called, is not just ordinary instant noodles. Living up to its name -- literally, "luxurious noodles," Bakmi Mewah comes packaged in a black paper box rather than plastic wrapping, as many existing noodles do. "Real chicken inside," the copy on the package proclaims. Boil for a few minutes, add seasoning, place cooked chicken meat on top and anyone can make a noodle dish equivalent to one served at a restaurant, so to speak.

For a reasonable 7,000 rupiah (53 cents) or so, a pack of Bakmi Mewah can bring consumers the joy that costs 50,000 rupiah to 60,000 rupiah at a restaurant, which is said to be driving the noodle's popularity.

Major food producer Mayora Indah introduced the product last year, and it became a huge hit among families living in cities, among others. At supermarkets, some customers buy it in large quantities, sometimes 20 and 30 packs at a time, a salesperson said, indicating its popularity has not waned. Mayora's share of the Indonesian instant noodles market is said to be still nominal, but its product is surely gaining presence on shelves.

Instant noodles are something of a national dish for Indonesians. People cook them at home, and most street stalls use them to create individual menus by adding ingredients such as chicken, meatballs and green vegetables.

The leading instant noodles brand in Indonesia is Indomie, sold by world-class instant noodle maker Indofood Sukses Makmur. The company controls some 70% of the country's instant noodles market. Many expect the dominance will not be undermined significantly for some time.

Supermarkets and other retailers are gradually introducing instant noodles in cup containers alongside regular soft-pack noodles. Cup Noodle, a well-known Japanese instant noodle made by Nissin Foods Hodlings, is becoming visible here. With the advent of rich instant noodles, consumers now have a wider variety of products to choose from in a broader price range, including Indomie.

In response to the trend, Indofood recently launched the Real Meat instant noodles series sold in paper packages. By entering the high-end market, the company hopes to meet ever more diverse consumer demands, including in various types of packaging.

Indonesia is a country of some 250 million people that is dominated by young people with a voracious appetite. These are consumers who have achieved better living standards and want to enjoy a diverse food culture. For businesses, it is difficult to survive in the market without constantly introducing new products. Just wait and see what the next evolution in the instant noodles market here will be.