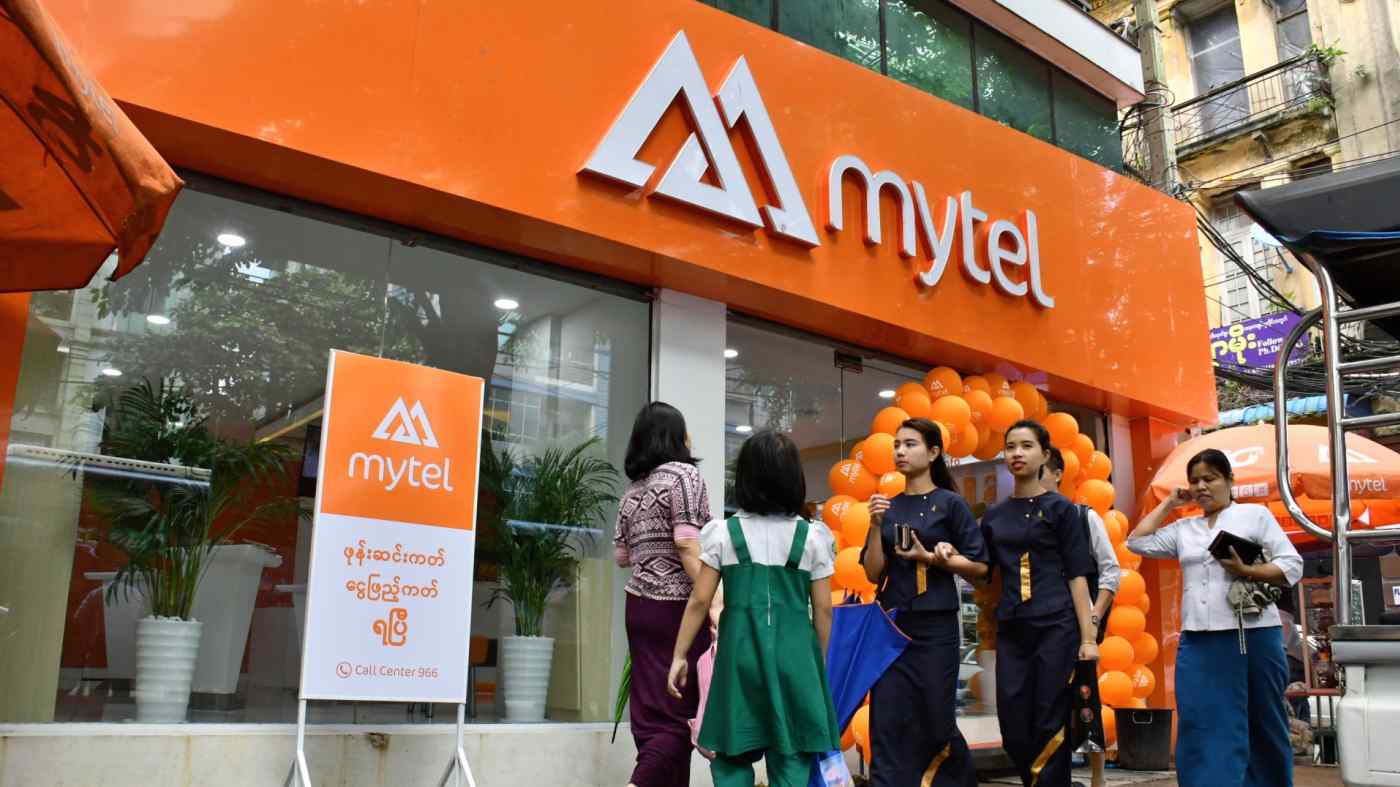 YANGON -- Myanmar's mobile phone market has seen a rapid shift in market share with the arrival of newcomer Mytel, which has offered cutthroat discounts that have won the hearts of the nation's users.

Supported by its powerful Vietnamese parent Viettel Group, the new entry has managed to capture 4% of the market after only two months in operation.

"I keep hearing the commercials, so I decided to try them out," a 30-year old man said at a Mytel showroom in Yangon. The provider, first established in 2016, finally launched mobile services nationwide in June. Signs and posters featuring its orange and white logo have festooned Yangon's cityscape since that date.

The biggest draw for Mytel, also known as Telecom International Myanmar, is its dirt-cheap rates. A 30-day, 5-gigabyte data plan sells for 3,500 kyat ($2.31), which is less than half the rate set by Myanmar's biggest carrier, the state-run Myanma Posts and Telecommunications.

Myanmar's mobile customers chiefly purchase prepaid plans, and people are free to switch SIM cards at will. Many users hold SIM cards for multiple carriers that are chosen depending on the situation.

At the end of June, the three biggest carriers in Myanmar catered to 53 million total customers. Mytel's price-cutting strategy drew 2.4 million users by the middle of August, translating to a market share topping 4%.

Back in Vietnam, it took Viettel a full year to attract 2 million customers. The telecom owns 49% of Mytel, while the remainder is split between two other Myanmar shareholders. Myanmar is Viettel's 10th foreign market since launching operations in Cambodia in 2009. Its overseas footprint extends all the way to Mozambique and Haiti.

Viettel has since built up a commanding 46% market share in Cambodia, as well as a 50% slice in East Timor. Offshore operations generated 19 trillion dong ($815 million) last year, more than quadruple the figure in 2010.

But the telecom established its business most rapidly in Myanmar, where the cellphone saturation rate has jumped from 32.9% in 2014 to 81.5% last year. MPT used to hold a domestic monopoly, but the transition from military rule to a civilian government ushered in Norway's Telenor and Qatar's Ooredoo, which both launched services in 2014. That same year, MPT forged a joint tie-up with Japanese mobile carrier KDDI and Tokyo-based trading house Sumitomo Corp.

Myanmar's three major rivals have been on edge over Mytel's encroachment. They issued a joint statement in February agreeing to "abide by sound price competition practices" -- a thinly-veiled rebuke against Mytel's discounted price schedule. A woman sells Mytel prepaid cards at a shop in Yangon. (Photo by Yuichi Nitta)

Last year, the Myanmar government banned sales of loss-making mobile plans and the free distribution of SIM cards in a bid to curb excessive competition. But because Mytel is a new player, it won an exemption for its discounts.

However, "the rates are expected to be hiked to the same level as other companies eventually," said an industrial insider, with the exemptions likely expiring by early September.

Even so, Mytel will end up accepting 4 million to 5 million contracts by the end of the year, according to Zaw Min Oo, the company's chief public relations officer. The company is offering plans bundled with low-end devices manufactured in Vietnam, and is flooding the television airwaves with commercials.

Mytel is able to afford the low-price strategy because of the backing of Viettel, a state enterprise directly controlled by Vietnam's defense ministry. Viettel commands a 47% market share in Vietnam, far outstripping the 26% share of its closest rival MobiFone.

Although Mytel has endeavored to toe the regulatory boundaries with its aggressive discounting, one sales campaign apparently crossed the line. Around June, authorities ordered the carrier to halt a lottery-type promotion that gives away free services through an app. Complaints from rivals initiated the corrective action.