Competition intense in market forecast to reach $10bn in 2020 HANOI -- With its move into Vietnam, Amazon.com seeks to cater to a fast-rising middle class, but faces logistical hurdles as well as no shortage of rivals.

The U.S. e-commerce group -- whose founder and CEO Jeff Bezos recently became the world's richest person on Forbes billionaires' list -- will partner with the Vietnam E-commerce Association of online merchants in the Southeast Asian country.

"Amazon has around 300 million clients from 180 nations," Gijae Seong, head of Amazon Global Selling Singapore, told a forum hosted here Wednesday by the U.S. company. "We provide tools to assist sellers and exporters to sell goods in broader markets in the easiest way."

The partnership with Amazon will give VECOM's members a platform for increasing exports of Vietnamese-made goods. But for Amazon, this represents only the first stage of its entry into an emerging economy with a population of 93 million and growing.

After building ties with VECOM members, Amazon's next step will likely be to penetrate Vietnam's own e-commerce market with its marketplace service, which requires maintaining no distribution centers or inventories of its own. Should business go well, the company would then start to build this infrastructure to scale up its presence, as it has in Japan and other big Asian markets. 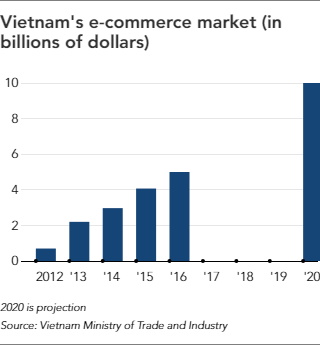 Online shopping has only just taken off in Vietnam and looks to have plenty of room to grow. The local e-commerce market is projected to double in size to $10 billion in 2020 from $5 billion in 2016, according to the Ministry of Industry and Trade. Driving this growth is the rise of the country's middle-income consumers. Per capita gross domestic product has risen to $4,000-$5,000 in Hanoi and Ho Chi Minh City. Smartphones and Wi-Fi internet access are becoming common, and 4G mobile network coverage will expand to more of the country this year.

Ease of trade provides a further tailwind. As part of the Trans-Pacific Partnership, Vietnam will gain greater market access to fellow members like Japan, Singapore and Australia, and vice versa. The ASEAN Economic Community, now in full effect, has eliminated nearly all tariffs within the Association of Southeast Asian Nations and is speeding customs procedures. This improves Vietnam's position as a base for distributing goods to Cambodia, Thailand and other neighboring countries.

All this has not been lost on Chinese tech groups, which have spread their network of investments into the region. Alibaba Group Holding-backed Lazada operates in various Southeast Asian markets, while Tencent Holdings' camp includes Shopee, which is winning over customers with free shipping, and Tiki. 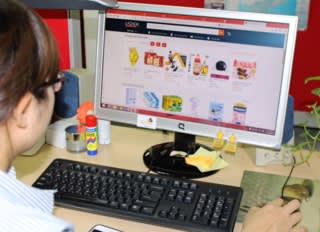 A consumer in Hanoi checks out products on Lazada.

In an indirect way, fellow U.S. tech company Facebook poses another competitor to Amazon in Vietnam. Many Vietnamese sell products through the social network, some earning upwards of $10,000 a month. This trade has gotten so brisk that the Vietnamese government considered taxing such transactions.

"It is not easy for Amazon to 'enter' the Vietnam market as it must compete with around 1 million Vietnamese sellers," Nguyen Tuan Ha, CEO of local logistics group Vinalink, wrote on his Facebook page.

This phenomenon reflects the distrust of online vendors in Vietnam, particularly when it comes to buying expensive items. In a country where fewer than 10% of the population has credit cards, paying for online purchases usually involves cash on delivery or upfront bank transfers. Payment is a common source of trouble with shopping over the internet. "I worry whether I will actually get the products I order," a Hanoi woman says.

Any vendors trying to scam buyers on Facebook soon find negative comments about them on the social network, which has 40 million users in Vietnam. This serves as an informal rating system that consumers check before they buy. 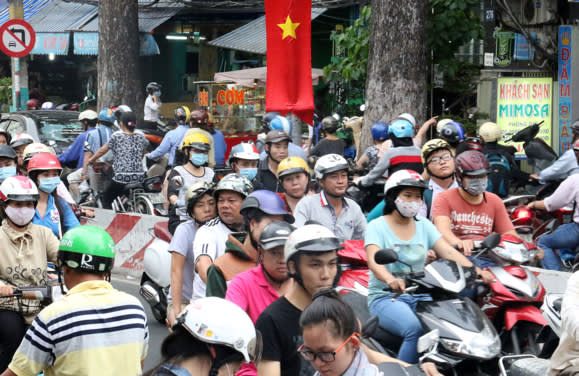 Thanks to the growing number of consumers with access to the internet, Vietnam has emerged as world's fastest growing e-commerce market. (Photo by Ken Kobayashi)

While the number of parcel delivery companies has grown since deregulation allowed wholly foreign-owned operators to enter this sector -- Japan's Yamato Transport arrived in 2014 -- they remain few. The home delivery sector still consists mainly of sole proprietors carrying packages on the back of their motorbikes. Package theft is rampant, making it in an unwritten rule of Vietnamese e-commerce never to ship expensive items.

But with middle-class consumers spending ever more on homes, cars, appliances and other big-ticket purchases, a broadening of Vietnamese online shopping habits looks like a sure bet. So too does a fight between Amazon and Alibaba for dominance in this promising market.