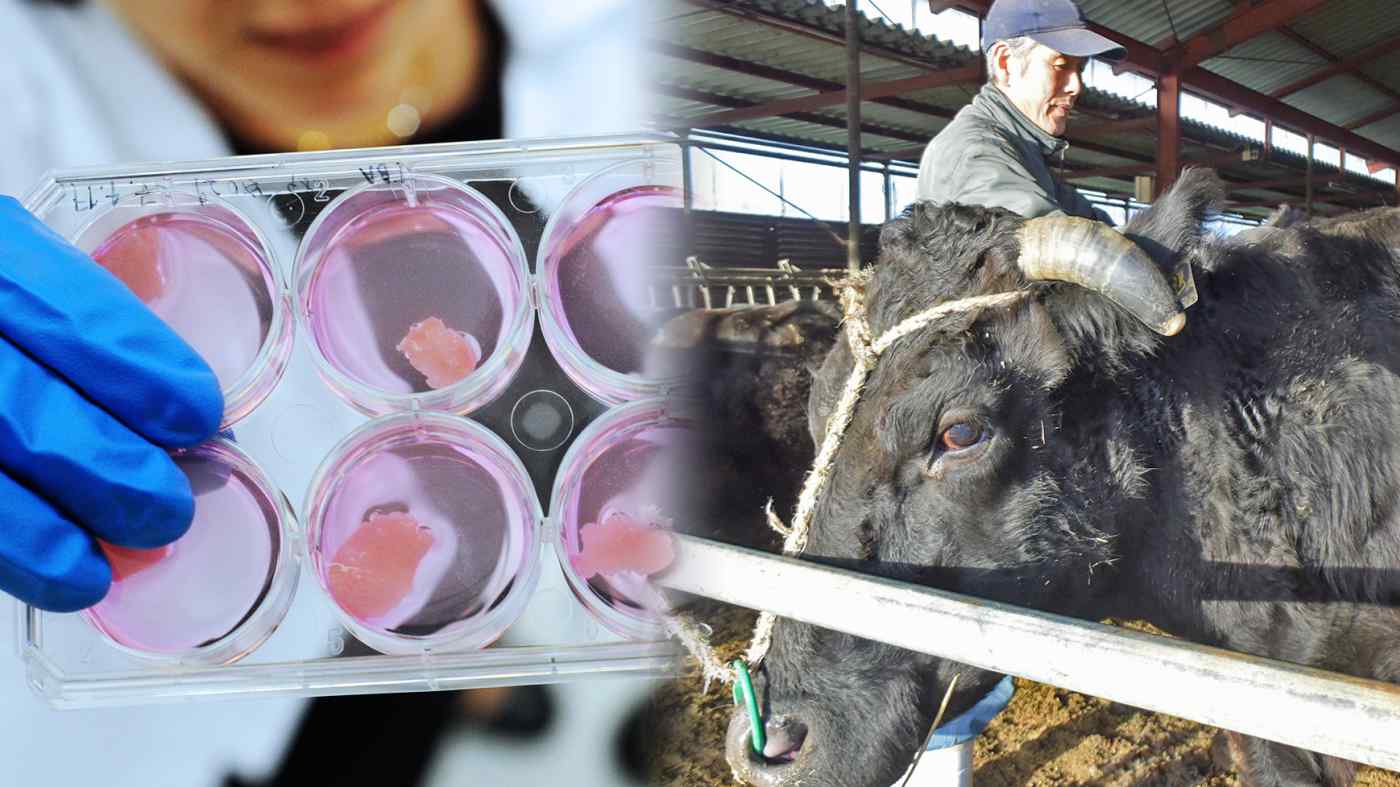 GUNMA, Japan -- For decades, Japanese farmers have been perfecting melt-in-your-mouth beef that has gained a cult following worldwide. But one producer is going a step further and exploring whether wagyu can be grown in a lab.

The rare partnership between a 70-year-old family business and a startup looking to disrupt the farming industry is an attempt to combine tradition with cutting-edge science and create affordable meat to feed the world's growing population. It could also be an indicator of whether the broader wagyu industry -- which is enjoying high overseas demand but faces the demographic challenge of an aging farmer population -- is willing to embrace foreign technology.

"Humans and livestock are competing for grains," Toriyama President Makoto Toriyama said in an interview. "In Japan, which is not self-sufficient on food, the cost of production will only increase. We thought we can help solve this problem." Just, which sells plant-based alternatives to mayonnaise and eggs, aims to become a trailblazer in cultured meat. (Courtesy of Just)

Toriyama will initially export wagyu meat to Just, which will isolate cells and try to culture them -- feeding proteins and other nutrients to grow tissue -- into pieces of meat. The goal is to lower the cost of production while modifying the texture and flavor of the meat so that consumers cannot tell the difference from the flesh of actual livestock.

The companies do not have a target date for a final product but aim to "make progress" in 2019. Once a product has been developed, Singapore-based Awano Food Group, Toriyama's export agent, will distribute it.

Growing doubts about the sustainability of the conventional meat production system are driving high-tech endeavors like Toriyama and Just's. The U.S. startup aims to become a trailblazer in cultured meat, which proponents hope will enable production without harming animals. The company, which also sells plant-based substitutes for mayonnaise, eggs and other food products, plans to soon introduce cultured chicken in a restaurant.

Analysts say it will take years for countries to create the regulatory framework needed to sell cultured meat on a large scale. But rivalries are budding: Israeli startup Aleph Farms recently said it created the world's first cell-grown steak using cells isolated from a cow.

Plant-based meat alternatives have already become a fast-growing industry in the U.S. Impossible Foods, which sells plant-based patties with a protein that adds a meat-like flavor, have raised ample cash from investors.

Wagyu -- which simply means "Japanese beef" in the local language -- refers to four breeds native to Japan, the Japanese Black. The meat is renowned for its tenderness, attributed to the cows' ability to store fat and the farmers' long and intensive care. Some call it the "Rolls-Royce of meat," and it is generally sold at a premium at restaurants and butcher shops.

Overseas demand for the beef has surged, thanks partly to the Japanese government's aggressive efforts to offset a shrinking domestic consumer market. Exports during the January-October period rose 32.5% on the year to 18.8 billion yen ($170 million), higher than exports of the Japanese spirit sake. The international recognition makes wagyu an attractive product for Just, which says the cost of culturing cells does not differ according to the type of meat.

But the use of Japan's prized agricultural export is likely to attract controversy in the country, which has painstakingly sought to protect the cattle from being raised overseas. Exports of wagyu livestock are banned, and an association of stud bull owners was formed in 2009 to promote the use of genetics domestically.

"Wagyu is a national treasure," said one major farmer in western Japan. "Why would you bring its DNA outside the country?"

Katsuto Anada, an executive at the Kyoto-based Wagyu Registry Association, said it has "never debated the prospects of cell-grown wagyu" and that "it is up to the producers whether they want to make something new." But he also added, "We tell farmers that wagyu may be owned by individuals, but the development of the industry has been a collective effort." Toriyama, which has spent years perfecting its wagyu, plans to keep raising cattle the old-fashioned way. (Photo by Wataru Suzuki)

Makoto Toriyama insisted the cultured meat would not compete with wagyu, and that he has no plans to stop running his cattle farm. Despite working with a startup, his ranch shuns automation and relies on human hands to feed the animals.

But Toriyama also pointed out the limits of the current system, including rapidly aging farmers and relentless genetic modification that has made it relatively easy to produce top-rated wagyu. This means farmers pay high prices for the best blood lines but struggle to differentiate, resulting in bruising price competition when they sell the meat to distributors.

For nearly a decade, Toriyama has been working with another startup to make its own taste indicators for its Akagi-gyu wagyu brand. He hopes the partnership with Just opens up new possibilities.

"I am excited about how the scientists assess the quality of our meat," he said. "We have been thinking that it is the best, but is it really the case? I am eager to hear what they find."