TOKYO -- The likes of Tokyo and Kyoto may still be top of many visitors' itineraries, but Japan's tourism industry is changing as more and more people head west in search of new experiences.

According to Mizuho Research Institute, several prefectures in western Japan have seen a dramatic increase in the annual number of overnight stays made by foreign tourists in the past few years.

When comparing the figure averaged over 2013 to 2017 with the number for 2012, there was an 87% rise in the capital city. The rural western prefecture of Kagawa, on the other hand, saw the largest increase with a jump 485%, more than three times the national average.

Scheduled flights connecting the local airport to Seoul and Shanghai have contributed to the boom, but so too has a Southeast Asian internet sensation. Around 4,600 Thais visited the prefecture in 2015, compared with 380 in 2012. 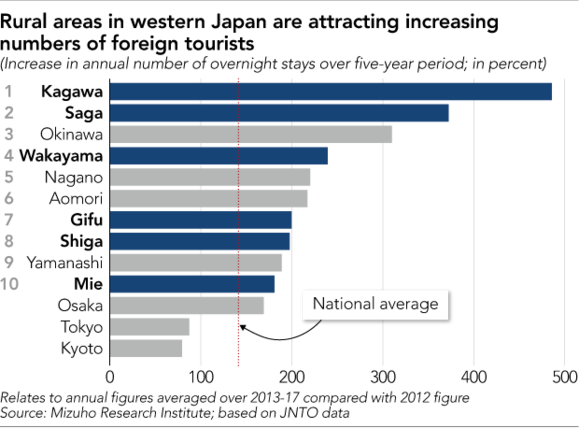 Yutoku Inari shrine is "where Mhee and Naomi took their wedding photos," said a member of staff, referring to a scene from Thai TV drama "Stay."

"We get 200 to 300 Thai tourists per day during high season," said chief priest Tomohisa Nabeshima.

Saga has the inenviable claim of coming in the bottom three in Brand Research Institute's attractiveness ranking for Japan's 47 prefectures. But the local film commission has made considerable efforts to attract foreign filmmakers. The drama has been viewed more than 10 million times online.

Nabeshima has been learning Thai for three years and can now give guided tours in the language. He has also produced fortune slips in six different languages including English and Thai.

"It is important to put in place a system to make foreigners feel welcome," said Kimie Yamaguchi, project general manager at the Saga Prefectural Tourism Federation's planning and advertising department.

Tourists and local business owners can make use of an interpreting app set up by the prefecture in 2015. The app is linked to a 24-hour call center manned by translators who can cover 15 languages.

For years, the tourism industry in western Japan largely catered to Koreans and Chinese hopping over for a quick shopping spree in the department stores of Osaka and Fukuoka. But thanks to local government initiatives focusing on experience-based consumption like those made in Saga, many visitors are now heading to lesser-known areas. 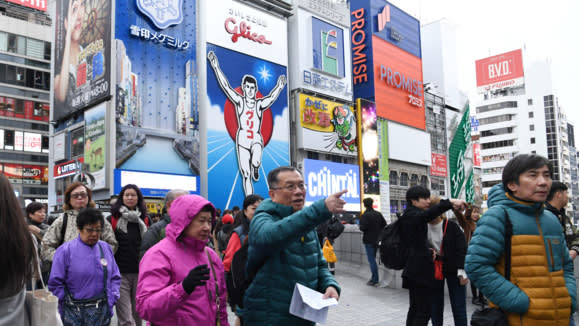 The city of Osaka has long been a destination for shopping trips, but increasing numbers of tourists are now looking for more experience-based vacations. (Photo by Hiroshi Tamehiro)

Kochi Prefecture on the island of Shikoku, which had one of the lowest numbers of foreign visitors in 2016, has also seen a significant upturn.

The main berth at the prefectural capital's port has been enlarged, meaning it could host 42 cruise ships in 2017, compared with just six in 2012. The number of stores offering duty-free goods to tourists in the prefecture increased from four in 2014 to 116 in 2017.

According to the Japan National Tourism Organization, foreign visitors to Kochi spend average 60,827 yen ($557) during their stay in the prefecture, the third-highest amount in the country. That figure can partially be explained by the fact that, at 7.8 days, the average length of stay is higher in Kochi than many other places.

Visitor numbers still tend to be dominated by tourists from neighboring countries on shopping and gourmet trips, but the prefecture and local tourist board are trying to promote longer stays based on the region's natural landscape.

More flights between Taipei and Takamatsu Airport in the neighboring prefecture have led to more arrivals from Taiwan, and all four prefectures in Shikoku broke their respective records for the number of visitors in 2017.

"Western Japan is much easier to access [for Asian tourists] than eastern Japan," said professor Takayuki Satake of the Institute of Business and Accounting at Kwansei Gakuin University in Hyogo Prefecture.

However he also warned of a lack of accommodation in the area. "More needs to be done to get people staying longer, like promoting vacation rentals or agritourism," he said.

"Unlike shopping trips, you need a little more time to really enjoy the beauty of western Japan."

Not to be outdone, the country's traditional shopping destinations are also trying reel in more visitors. 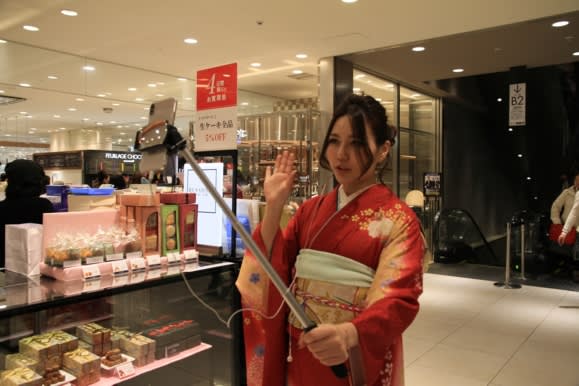 "There are many repeat visitors to Osaka, and we need to think about providing an exciting shopping experience," said Arisa Yamada, a public relations officer at Kintetsu Department Store.

Since last year, the company's flagship store Abeno Harukas has been broadcasting events online in an effort to entice Chinese visitors to the city. A Chinese exchange student, who now works as influencer in Osaka, shows off the store's products via Chinese broadcasting site Yizhibo.

The last broadcast was made during Chinese New Year in mid-February and was viewed 116,000 times.

The Canal City Hakata shopping mall in Fukuoka, on the other hand, has begun accepting payment systems used in neighboring countries. Japanese consumers tend to pay in cash, but operator Fukuoka Jisho felt it needed to do more to accommodate visitors.

The mall was one of the first businesses in Japan to accept South Korea's Shinhan Card in 2014, and recently also began accepting the country's KB KooKmin Card. Since February, Chinese mobile payment systems Alipay and WeChat Pay have also been accepted.