TOKYO -- While bickering between the two countries' politicians continues to make headlines, consumers in South Korea and Japan appear to be more than happy to buy into each other's culture. 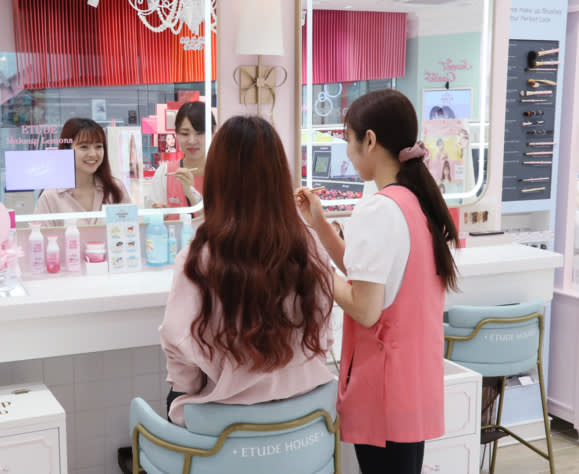 The striking pink facades of Etude House and Stylenanda face each other across Takeshita-dori Street in Harajuku, the mecca for Japanese "kawaii" culture. Every day, both shops are packed with teenage girls as soon as school finishes.

Korean cosmetics "get my spirits up," said 18-year-old college student Marie Osawa. The brands introduce new trends before their Japanese counterparts. Eyebrow tint, a gel color that lasts several days even after washing the face, is the base for the latest look Japanese teens cannot be seen without.

"They help show my personality," said a 17-year-old high school student about the bright lipsticks she prefers to the softer hues of Japanese products.

Japanese consumers used to clamor for Western cosmetics but now South Korean brands have become hugely popular. Imports from across the Sea of Japan came to about 14.6 billion yen ($128 million) in 2016. While that was still the fifth-largest amount by country, the growth rate of around 50% was the largest among major economies.

Etude House has opened four new stores in Japan in just the past six months, including one in the famous Shibuya 109 fashion building, and they are likely to have a total of around 20 by the end of this year.

The concept of making makeup "fun" has hit all the right chords with young Japanese, according to Rina Matsui from the Japan unit of the brand's operator AmorePacific Group. The Korean pop culture boom in Japan goes back to 2003, when TV drama "Winter Sonata" became a huge hit, especially among middle-aged women. Today, it is the younger generation that cannot get enough hallyu.

With help from flea market app Fril, The Nikkei recently surveyed some 1,700 women in Japan about which country most influences their styles. South Korea came out No.1 out of 11 countries among teenagers, with 48% of respondents putting it at the top of the list, while for twenty-somethings the figure was 26%.

But it is not just one way traffic. Exports of Japanese cosmetics to South Korea jumped more than 20% on the year in 2016. Where luxury brands like Shiseido's Cle de Peau Beaute, have established a reputation among affluent South Koreans, the likes of Three from Pola Orbis Holdings and other midrange brands are now catching on with young women. The Asahi Super Dry bar in central Seoul is open only for the summer.

Since 2010, Asahi has been running its "angel ring" advertising campaign featuring a popular Korean actor, focusing on the "coolness" of the product. The campaign appears to have worked. Asahi has become the No.1 beer among some 200 imported brands in the South Korean market, controlling a 20% share. For Asahi itself, South Korea is by far the largest overseas market.

Other Japanese brewers are also making inroads. Kirin has begun exporting its beers made in Fukuoka Prefecture, southwestern Japan, to South Korea. The labels are adorned with cherry blossoms and autumn leaves to try and create a special "Japanese" look.

Between 2013 and 2016, exports of Japanese beers to South Korea almost doubled to 5.3 billion yen.

Gross transactions of processed goods related to clothing, eating and living between the two countries topped roughly 220 billion yen in 2016, up some 20% from 2010 -- an encouraging statistic after three consecutive years of decline in the total amount of trade.

Traffic of entertainment content is another area of growth.

According to music website LiveFans, K-pop group Big Bang topped concert attendance figures in Japan for 2016 with around 1.8 million fans going to its concerts. Four other Korean acts were also listed in the top 30.

According to Jang Hyukjean, an Mnet director, Japan is the second-largest export market for Korean drama content after China, with the country often accounting for around 20% of sales for a show. This has made South Korean producers take into account what they think will appeal to Japanese fans when planning new dramas.

"Japanese fans are generally loyal, and willing to spend even 10,000 yen for goods of artists they follow," said a source from a leading talent agency in South Korea. "It's a unique phenomenon that Japanese fans want to buy hallyu CDs," when free downloading has become so commonplace, the source also said.

Teenagers are also leading the hallyu boom when it comes to entertainment. Kstyle, a Japanese-language website distributing entertainment news from South Korea, currently gets about 3.6 million visitors a month, up nearly 40% over the past three years. Visitors aged 19 or younger account for 40% of the total.

"Japanese novels are excellent at depicting deep inside characters," said Lee Sarah, a 24-year-old Korean who works in Tokyo and is a big fan of Osamu Dazai, an author from about a century ago.

After the U.S. and France, South Korea is the third-largest source of overseas licensing revenue for Japanese publisher Kodansha's manga comics. Recent hits that have been translated in Korean include "Attack on Titan."

Last year's blockbuster anime film "Your Name," has so far been watched by 3.6 million moviegoers in South Korea.