Where 'Made in Japan' went wrong, and how to fix it Nissan Motor admitted last year that vehicle inspections had been carried out improperly but denied this was due to labor shortages. (Photo by Takeshi Shiraishi)
YOSHIFUMI UESAKA and ITSURO FUJINO, Nikkei staff writersMarch 22, 2018 12:30 JST | Japan
CopyCopied

TOKYO -- Hoping to repair its tarnished reputation, Kobe Steel unveiled a new system to record all testing and inspection data at its aluminum rolling plant in Moka, Tochigi Prefecture, one of the largest in Japan.

"The new system leaves absolutely no room for data tampering, even if someone were tempted to do so," said a person familiar with the system, which went online in February.

Whether the system is actually foolproof or not, there is a bigger question that Kobe Steel and Japan's other scandal-hit manufacturers should be asking themselves is: Why are employees tempted to fudge the numbers in the first place?

The answer, as similar cases at Nissan Motor, Kawasaki Heavy Industries and others have revealed, is threefold -- labor shortages, a rift between management and frontline workers, and a focus on quality that can only be described as excessive. 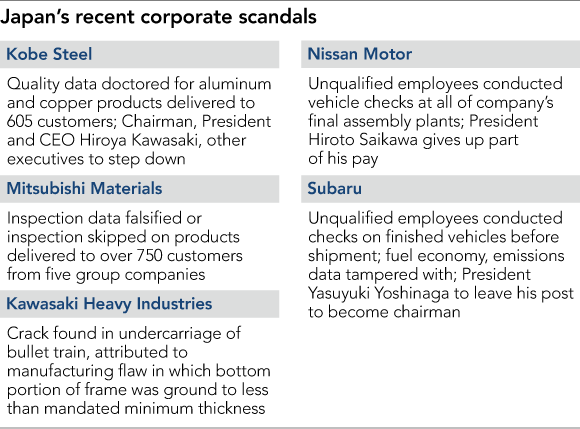 Entrenched problems like these are not easily solved, but the future of the "Made in Japan" brand depends on tackling them.

Kobe Steel's troubles offer some insight to the pressures facing Japanese manufacturers. According to an in-house investigative report released on March 6, the steelmaker's aluminum and copper segments -- now its main earners -- had been struggling for a long time, contributing little to the bottom line. To change that, Kobe Steel decided to accept aluminum and copper orders even if it did not have the production capabilities to fulfill them as promised.

If those sales had not been made, the report said, "the plants might have been forced to suspend operation."

The data falsification started sometime around 1992 at the instruction of the head of the quality assurance unit. That person was later promoted to vice president but never reported the irregularities to the board.

Kobel Steel traces its origins back to Suzuki Shoten, one of Japan's leading trading houses in the early 1900s. It began diversifying its operations almost immediately and now has seven main businesses, including steel, aluminum and copper, and electric power. "Each business segment is highly independent, so much so that they are like different companies," said an executive of a rival company. 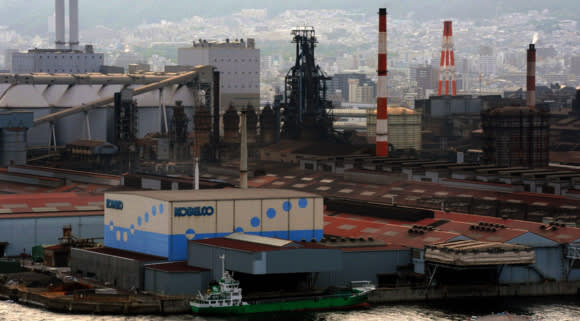 This highly segmented structure created "silos" within the company that hindered communication and helped sow the seeds of its recent trouble.

It was a similar story at Mitsubishi Materials: In a news conference last December, President Akira Takeuchi blamed data tampering on "poor compliance by those who were directly involved in the wrongdoing."

During the postwar economic boom, when business was brisk, management rewarded factory workers with raises and benefits. Front-line employees, for their part, actively engaged in efforts to improve product quality, including forming workplace "quality control clubs." Before long, Japanese manufacturers were taking the world by storm.

But then came the 1990s and the bursting of Japan's economic bubble. With the yen surging, manufacturers began a flurry of restructuring, with many moving factories overseas. As management focused more and more on turning a profit, workers no longer had the time to make steady efforts to improve their products. The number of quality control clubs registered in Japan peaked at about 27,000 in fiscal 1984 and now stands at slightly more than 1,000, according to the Union of Japanese Scientists and Engineers (JUSE. The group's Deming Prize, awarded for contributions to quality control, has often gone to companies or individuals in India and other emerging economies in recent years, JUSE said.

The Nissan scandal involved improper inspections at its Oppama plant in Kanagawa Prefecture. To keep the plant going, employees there had worked hard to slash costs. This led to new vehicle production being taken away from other factories and moved to Oppama in 2016. Operating at near capacity, however, the plant did not have enough inspectors to keep up. It dealt with the problem by cutting corners on inspection procedures.

"Why didn't the workers speak up?" a Transport Ministry official who had performed a spot inspection later asked.

In a news conference last October, Nissan President Hiroto Saikawa said the faulty inspections were "probably not due to a labor shortage." But according to an investigative report released a month later by lawyers, "No particular consideration was given to ensuring the plant had enough workers," indicating a disconnect between management and employees.

At the same time, Japan's manufacturing sector as a whole is facing a dire labor shortage. In January, Kobe Steel set up a new division at its head office to oversee overall quality. Earlier this month, the company posted a job opening notice for a Tokyo-based position with the division, offering permanent-employee status and an annual salary of between 6.5 million yen ($61,260) and 13 million yen.

While competition for workers is heating up across the industry, it is particularly intense in quality control, which is not a particularly popular field in manufacturing. Data from job search site En-japan showed that the number of job offers for quality control positions in the electrical and electronic parts segment jumped 350% between March 2014 and March 2018, and about 400% in machinery, mechatronics and automobiles. Manufacturers are so desperate to find workers that they are scrapping age limits, such as those restricting applicants to 40 years old or younger. Production line workers are also hard to find. The average hourly pay for part-time workers at convenience stores as of January 2018 was up 4% from three years before, while hourly pay for manufacturing had increased 13%, according to a survey by staffing agency Persol Career. Higher wages, however, have not been enough to remedy the shortage of workers. Many manufacturers are relying on temporary staff as a last resort, but even if they can find enough applicants, relying on temp workers presents another problem, as it makes it difficult to maintain quality.

Last November, when these scandals were making headlines almost daily, a salesperson at a Tokyo-based machinery parts maker was trying to persuade a robot-maker client to agree to fewer tests due to a shortage of labor and testing devices. "Data on strength is within the required range no matter how many times the tests are conducted, so there is no problem with durability and safety, even if we conduct fewer tests," the salesperson argued. The person in charge of procurement, however, was not convinced.

A subsidiary of Toray Industries was also involved in data fabrication, in this instance on tire cords, which are used to strengthen automobile tires. The subsidiary had a contract to supply tire cords with a strength of 260 newtons, but the product it delivered to the customer was only 258 newtons in strength. The problem was less about safety -- the difference was a mere 0.8%, and an official at a rival company said that even 250-255 newtons "would be more than enough to guarantee safety" -- and more about the fact that the subsidiary had breached its contract. Mitsubishi Materials President Akira Takeuchi, second from right, and other group executives apologize for a data-tampering scandal at a press conference in Tokyo last December.   © Reuters

Under a practice known as tokusai, manufacturers in Japan are allowed to ship products that are below agreed-upon quality standards, provided they obtain the customer's consent. This type of arrangement is even specified in Japanese Industrial Standards.

Toray President Akihiro Nikkaku, however, said, "We need an alternative to tokusai." He suggested contracts that set strict and explicit conditions as to product quality, including strength and durability, leaving no room for negotiation after the fact.

To compete in Japan's overcrowded market, manufacturers and materials makers have had to offer increasingly higher levels of quality, even if such levels go above and beyond what is strictly necessary. By comparison, leading German materials makers BASF and Thyssenkrupp only have to offer European carmakers products that meet accepted standards. This eliminates the excessive pursuit of quality that pushes costs higher.

"In the U.S. and European manufacturing industry, quality data in contracts is everything, and the quality [of the delivered product] is neither higher nor lower than that, so the tokusai arrangement is unlikely to work there," said Yuji So, head of JMA Consultants' quality innovation center. "It is necessary to put a system in place that ensures strict compliance to the quality and price agreed on with customers."

Recent scandals have dealt a serious blow to the Japan's reputation for quality. Repairing that reputation will take not only cooperation between management and workers, but also a new way of thinking about quality among both companies and customers.