OSAKA -- For 260 years, a Kyoto company called Ueba Esou specialized in paints for Japanese art. But after the president succumbed to illness, his daughter faced an almost unthinkable decision: Should she close the business?

Demand for the subtle traditional hues had declined, and Ueba Esou was saddled with debt. There were over 20 other companies in the same trade in the local area, and many were folding. "I'm only an amateur when it comes to business management," Yumi Ishida, who succeeded her father as president, recalled thinking. "What can I do?"

The answer was to do what a number of women in western Japan's Kansai region have done. Upon taking the reins of long-established family-run companies, these women have broken with older business models to stave off closures.

Ishida racked her brain, trying to think of ways to make the most of the company's history and the beauty of ancient colors. "I don't want to blame the times we're living in," she thought, "so I will continue to look for a new possibility."

She studied the shades, the paints and the Japanese paintings for which they are used. Her pursuit of new ideas took her to meetings with people from a cross-section of industries. A remark by a friend lit a spark.

"Decorating women's nails is like an art, isn't it?" the friend said. 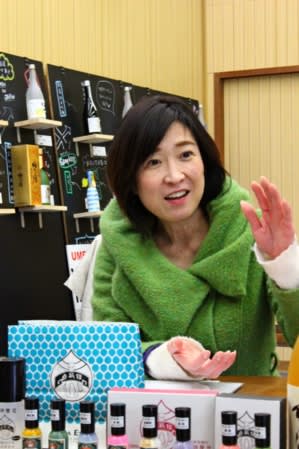 Ueba Esou's nail polish features pigments made from seashell powder -- a formula also used for its paints. This results in a less-pungent odor than conventional polish and reduces the damage to skin and nails.

The line of polish has gained a following; around 50 hospitals across Japan have introduced it for cancer patients.

Businesses that have been around for decades -- or centuries, like Ueba Esou -- share a problematic tendency. The longer their history, the more they adhere to their traditions. Some cling to the past until they vanish. But women like Ishida are transforming businesses across Kansai before it is too late.

Kayo Yoshida, the president of sake producer Umenoyado Brewery in Nara Prefecture, is another example.

Yoshida, 38, is the brewery's fifth president and the first woman to reach the top in its 125-year history. Her challenge is to promote sake to younger generations that have little interest in drinking it.

To achieve that, Yoshida gives lectures at a university on the history and techniques of local sake brewing, coupled with tasting sessions. Nara is thought to be the birthplace of seishu (refined sake).

Yoshida studied business in college and started out working for a general trading company. Later, she returned to work for the family company, and after four years informed her father that she would be willing to take over his position as president. He answered that he would let her succeed him if she proved her competence.

She also developed a line of sparkling sake that contains fruit juices, such as apple and blueberry. A number of French and Italian restaurants have embraced the line and its stylish, longneck bottles.

Having noticed the popularity of sake-based umeshu (plum wine), she created a product called Aragoshi Umeshu that contains plum pulp.

Yoshida said the sake industry's emphasis on tradition makes it all the more important "to have the courage to change."

"We should be able to find potential in a new sake culture."

Over in Osaka, Kayoko Takeuchi found potential in a very different sort of product: tension rods used to secure furniture to walls.

Takeuchi is the third president of Heian Shindo Kogyo in the company's 66 years in existence. Earlier in her career, she was a reporter for a national newspaper. But in 2010, her third year as a journalist, she reached a turning point when her father, then the president, fell ill.

Around that time, Takeuchi had begun to feel that she was losing sight of her mission at the newspaper. To fill the void left by her father, she joined the family business. She sought to build experience in product development and accounting, but her father's condition took a sudden turn for the worse, and she soon found herself in charge.

Takeuchi attended a study session with young corporate managers and startup founders, and said she took "inspiration from entrepreneurs who were trying to start a business from scratch." She thought about what her company was lacking, and realized that although it held the top domestic market share in tension rods, trudging along the same path would not lead to growth.

She came up with the idea of making products that would be part of a room's decor, rather than just practical tools. This resulted in a new line, Labrico, that allows for easy creation of shelves and partitions without damaging walls and ceilings. Not everyone agreed with her strategy. Veteran engineers worried about unpredictable profitability, compared with simple mass-produced tension rods. Two-thirds of employees quit and were replaced.

Takeuchi worked to recruit women and designers, while striving to convince the remaining engineers that the new concept would pay off. Now, Labrico is popular with women looking to jazz up their apartments and other spaces.

The workforce has grown, and 40% of employees are women.

Takeuchi, who leads the company with her architect husband, said the resistance to change was stronger than she had anticipated. But for small to midsize companies like hers, she said, "There are big opportunities if we can change ourselves."

Women may hold the key not only to saving old companies, but to revitalizing the Kansai region's broader economy.

The region's employment rate for married women between the ages of 25 and 44 was below the national average in 2015, at 64.9%, according to a report issued last year by the Asia Pacific Institute of Research, a think tank.

The report notes that women's participation and advancement in the workplace are crucial for shoring up a shrinking labor force. It cites a shortage of day care facilities as one obstacle.

The Kansai Economic Federation, an Osaka-based business body, and the Union of Kansai Governments, a grouping of eight prefectures and four cities, established a task force at the end of 2017 to boost female employment.

The Kansai Bureau of Economy, Trade and Industry, meanwhile, has launched a project to encourage young people to consider running family businesses. This includes lectures by managers who have successfully led such businesses into new industries. At an event in Osaka in late February, many of the participants were young women.

Midori Suzuki, a 29-year-old former flight attendant, was one of them. She aims to develop new types of stockings for her family's sock company in Nara Prefecture.

Typically, projects to promote family business succession focus on the leaders who need someone to replace them. The Kansai project is different, in that it is geared to would-be successors. This approach could encourage more women like Suzuki to take up the torch.