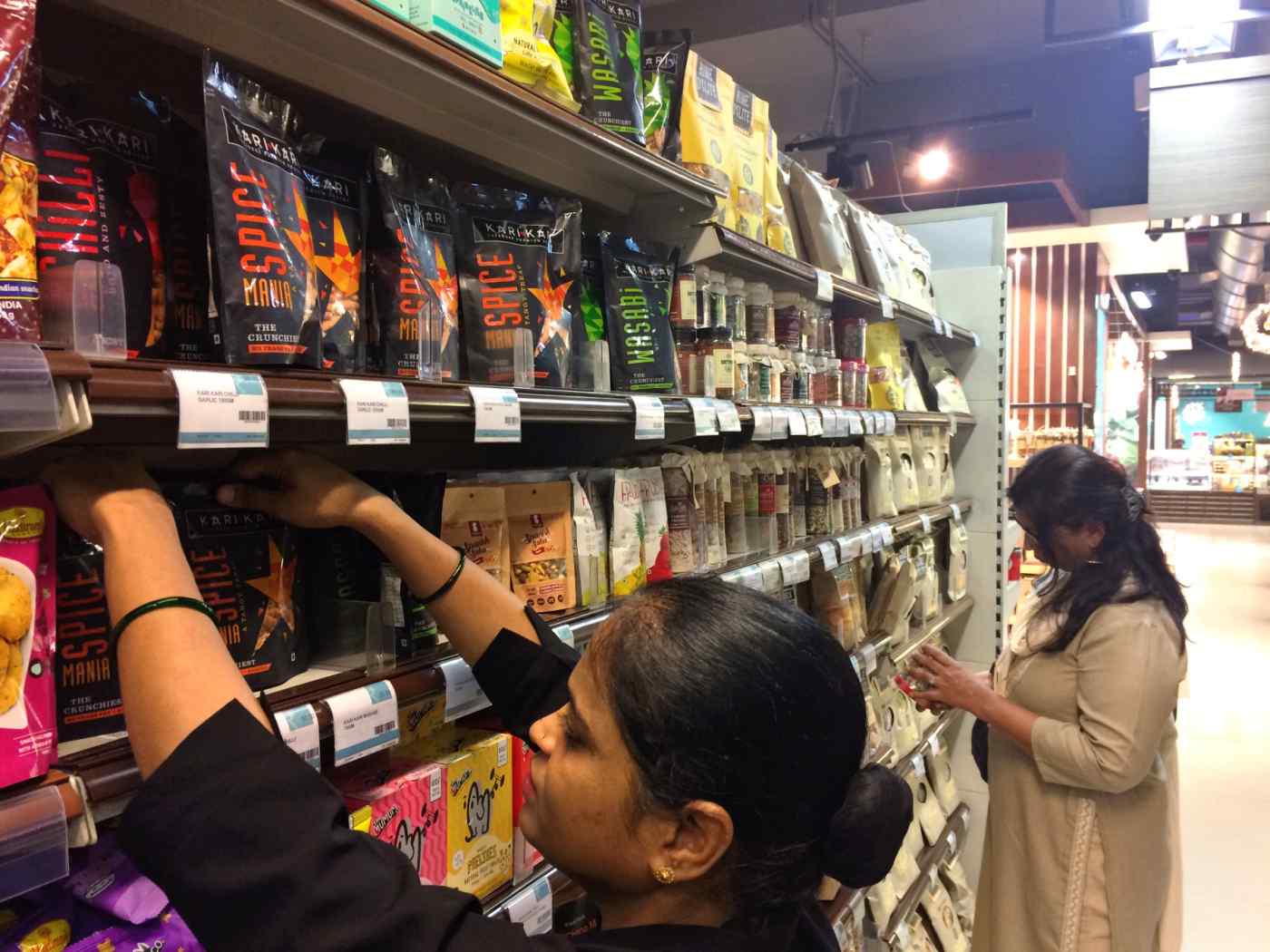 MUMBAI -- Foreign confectionary giants are piling into India, looking to secure bigger shares of a huge market with a large proportion of young consumers.

Kameda Seika of Japan has rolled out Indian versions of its best-selling rice crackers. Amid the intensifying competition, many Indian makers are considering mergers and acquisitions.

"At Hershey, our international business is key to our overall success, and India is a critical part of that success," said CEO Michele Buck at an Oct. 17 news conference in Mumbai to announce the launch of Hershey's Kisses.

Three varieties of the bite-sized chocolate drops are now available for Indian consumers -- Milk Chocolate, Cookies 'n' Creme and Almonds. The Milk Chocolate version is priced at 50 rupees (69 cents) for a 36 gram pack and 140 rupees for the 108 gram format.

The product first goes on sale in southern India, where chocolate consumption is larger, and the company plans to expand to other areas gradually.

Hershey entered the Indian market a decade ago through a joint venture with local conglomerate Godrej Group, and later acquired its partner's stake.

The U.S. company operates a manufacturing plant in the central state of Madhya Pradesh, and has been selling chocolate syrup, cocoa powder, beverages like milk shakes and the Brookside brand of chocolate products in the country. Kisses will be the first Hershey's-brand chocolate the company launches there.

Annual chocolate sales in India stand at around $1.2 billion, according to local media. The market is dominated by Mondelez International, the U.S. confectionery company best known for Oreo cookies, which has a share of over 60%.

Hershey remains undaunted, as India "offers significant growth opportunities given its demographic and economic potential and the expected consumption growth rates in the years ahead," according to Buck.

Lotte Confectionery, a unit of the Lotte conglomerate, increased its presence in the country in 2017 when it bought the Gujarat-based Havmor Ice Cream for 10.2 billion rupees ($139 million). In addition to selling ice cream, Havmor operates a network of ice cream parlors including the Baskin-Robbins chain.

Since it entered the Indian market in 2004, Lotte has steadily expanded its lineup, which now ranges from candies and gum to chocolate pies.

The South Korean company operates manufacturing plants in Delhi and Chennai. Havmor was founded in 1944, before India's independence, in what is now Pakistan. Lotte acquired the company in expectation of strong growth of India's ice cream market.

Last year, Japanese player Kameda Seika launched its popular Kaki-no-Tane rice crackers through a local joint venture, rebranding them as Kari Kari and giving them slightly modified flavors to suit Indian tastes. They come in two sizes -- a 70 gram pack at 50 rupees and a 150 gram pack at 99 rupees.

Currently, Kari Kari is sold at supermarkets in New Delhi, Mumbai and Bangalore, but Kameda plans to expand to other parts of the country.

India is Kameda's fifth overseas market after the U.S., Thailand, Vietnam and China. Rice crackers tend to be richer in proteins and carbohydrates but lower in fat and calories than most Western-style snacks, and the company is seeking to pitch its products as a healthier alternative to cookies.

Sales of confectioneries including ice cream in India grew 13% on the year to $14.4 billion in 2017, according to British research company Euromonitor International. The market is on track to grow at a double-digit rate again in 2018, as it has for the past several years.

Four of the top five players in India, including the Mumbai-based market-leader Perle Products, are local companies. Mondelez International has forced its way into third place through a marketing strategy that differentiates its products from those of its Indian rivals.