Looser rules for foreign brands will leave them boxed in

TOKYO -- China's promise to make it easier for foreign automakers to operate their own factories in the country is designed to ease trade tensions and ensure continued growth of the domestic auto industry.

Currently, foreign carmakers are required to set up joint ventures with local partners before building factories in China. Foreign makers are allowed to partner with up to two Chinese companies and own up to 50% of the resulting joint ventures.

Chinese President Xi Jinping has promised to scrap these restrictions by 2022, saying China will open its doors "wider and wider" to foreign investment.

Foreign automakers say they are ready to rush in. But to one executive at a major Japanese carmaker who has worked in China, the news is reminiscent of China's ascension to the World Trade Organization, in December 2001.

While the move will allow global auto giants to compete directly against Chinese automakers in China, Beijing appears confident that the domestic auto industry will not be hurt. After all, WTO openness did not crush domestic corporations that back then could not compete globally.

WTO rules are based on the principles of free-market economies. When China became a member of the global trade regulating body, many experts predicted that the step would make things harder for the country's budding industries. But these experts have been proven wrong. China's economy and trade have been expanding at dazzling speeds since 2001.

One indicator of China's huge trade success is the nation's current-account surplus. It soared twenty-fourfold to $420.5 billion in 2008 from $17.4 billion in 2001, according to the International Monetary Fund.

Although the surplus has since shrunk due to ballooning imports and surging domestic demand, the figure still boggles -- $164.9 billion in 2017.

"The factory of the world" is also the globe's second-largest economy, thanks to rapid, export-driven growth.

No other country has taken advantage of its WTO card as effectively as China, the 143rd member of the world body.

The global trade picture has changed radically in the past 16 years. The Doha Round of multilateral trade talks, which began before China acceded to the WTO, quickly bogged down amid a clash of interests between industrial and emerging nations.

It remains stalled to this day, and many countries and blocs of countries are now focusing on new bilateral and regional trade agreements. China is among the nations riding this trend. Using its enormous population of 1.3 billion as leverage, it has struck more than a dozen deals, with the Association of Southeast Asian Nations, Australia, South Korea, Chile and other partners.

These pacts have helped China ramp up its exports and secure the materials and energy resources it needs to fuel its economic growth.

Membership in the WTO has greatly helped China in negotiating these accords. The global trade regime has been a boon to China's domestic industries. And many U.S. policymakers now say it was a blunder to let China join the club.

The Japanese auto industry executive who reminisced about 2001 has no doubt China thinks it can repeat history by loosening the rules on foreign carmakers. "There is no chance," the executive said, "of China making a deal that can cause it a loss."

The rules requiring a Chinese partner will be lifted this year for so-called "new energy vehicles," those with electric or plug-in hybrid propulsion systems. In 2020, the requirement will be lifted for the production of commercial vehicles, and in 2022 for gasoline passenger cars. Traffic jams like this one in Beijing partly explain why the Chinese government is rationing new license plates. (Akira Kodaka photo)

In time, a foreign maker of passenger cars that already has two Chinese joint ventures will be allowed to set up a third subsidiary that it fully owns. It will also be able to raise its stakes in existing joint ventures to turn them into consolidated subsidiaries.

However, it remains unclear whether foreign automakers will have strong incentives to take these steps.

And new regulations are coming to the industry. In 2019, the Chinese government will start requiring carmakers to amass new energy vehicle credits. Next year, 10% of the vehicles an automaker produces and sells in China must qualify for these credits. The level will be raised to 20% in 2025. If a company does not earn enough credits on its own, it will have to buy credits from competitors that have extra stockpiles.

In this policy environment, foreign carmakers with factories in China are unlikely to invest in new capacity. What is more, Western and Japanese makers will be unwilling to do anything that might irk their Chinese partners, such as trying to raise their stakes in joint ventures.

Chinese automotive companies like FAW Group and SAIC Motor will maintain the upper hand; they will also find it easier to switch foreign partners.

Foreign automakers will come up against other barriers to expanding in the market.

As part of its efforts to curb air pollution and traffic jams, the Chinese government has been restricting the number of license plates awarded to people wishing to own a car. The government has eased this measure for relatively cleaner electric vehicles, but the move is mostly benefiting Chinese companies.

Much the same has been true with Beijing's subsidies to promote electric car sales. This "China First" policy explains why the country's rapidly growing electric vehicle market -- 780,000 electric cars were sold in China in 2017 -- is dominated by Chinese makers like Beijing Automobile Works and BYD. 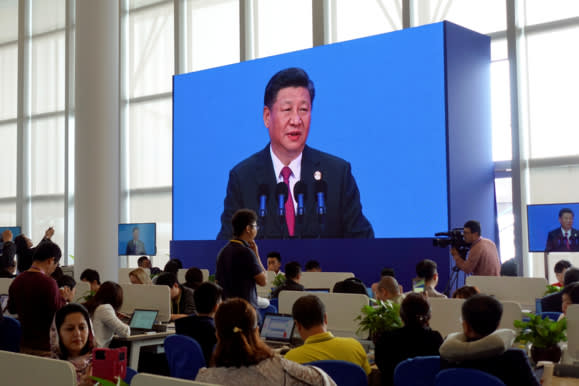 President Xi Jinping is trying to usher in an electric vehicle era in China, and he is counting on homegrown companies to to dominate it.   © Reuters

And the system that will have some automakers buying credits from others will be a boon to Chinese companies; they will have plenty of extra credits to sell to their foreign competitors.

This explains why Volkswagen, Ford Motor and Nissan Motor have already decided to partner up with Chinese companies to produce electric cars. Volkswagen, which sold over 4 million cars in China in 2017, already has a big investment ready.

China's auto industry was born in 1953, during Mao Zedong's time, with the production of commercial vehicles based on technology from the Soviet Union.

Full-scale production of passenger cars began in the mid-1980s under the economic reform agenda introduced by then paramount leader Deng Xiaoping, who opened China to foreign investment.

By using policy to favor electric vehicles, Xi is now trying to usher in a new era of car manufacturing in China.

Xi, who has cleared a path to extending his rule indefinitely, has been equally deft in setting up the future of China's automotive industry. His decision to ease the investment cap in stages is risk-free, designed to boost the international stature of the Chinese auto industry as well as his own political power.