TOKYO -- Food, beverage and cosmetics companies are paying more attention to the market for halal goods, which is expected to grow significantly in the future.

Halal, which literally means "permissible under Islamic law," became a buzzword in (non-Islamic) Japan about two years ago. It describes products free of ingredients forbidden under Islamic law, such as pork and alcohol. Food and consumer products makers from other countries are also taking newfound interest in the halal market. 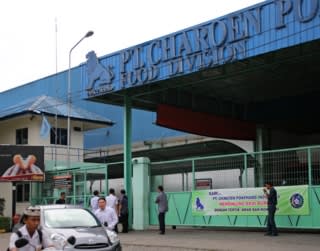 At a factory in an industrial park 60km west of Jakarta, the smell of frying chicken is heavy in the air. Here 2,000 employees of PT Charoen Pokphand Indonesia make chicken nuggets around the clock in three eight-hour shifts.

The agri-food company, a unit of Thai conglomerate Charoen Pokphand Group, is the Indonesia's largest producer of poultry feed, day-old chicks and processed chickens. The factory manager says all products made there are halal-certified, meeting Islamic standards.

Indonesia has more than 200 million people, a little under 90% of whom are Muslims. To tap into this market, which is growing in both size and wealth, Thai companies are expanding aggressively in the country.

According to the Pew Research Center, a U.S. pollster, there were 1.6 billion Muslims worldwide in 2010. By 2030, that figure is expected to reach 2.2 billion. High birthrates mean the share of Muslims in the world's population is expected to rise from 23% to 26% during the same period. This implies huge growth in demand for halal products.

Perhaps surprisingly, roughly 60% of the world's Muslims live in the Asia-Pacific. As of 2010, the four countries with the largest Muslim populations were all in Asia: Indonesia, Pakistan, India and Bangladesh. At the time, there were roughly 200 million Muslims in Indonesia, about 180 million each in Pakistan and India, and some 150 million in Bangladesh.

Halal-certified goods are essential for devout Muslims. In a village in South Jakarta, where the proportion of Muslims is extremely high, a shopkeeper said consumers felt reassured only when buying products from major food makers such as Indomie, because they are halal-certified. Indomie is a big instant noodle brand in Indonesia.

As Indonesia emerges as a big consumer of halal products, neighboring Malaysia hopes to become a major supplier. Although Malaysia itself is about 60% Muslim, the total number of Muslims in the country is only a little over 17 million. Given the modest size of the domestic market, Malaysian companies are hoping to grow by selling abroad.

Thoyyib Pharma Industries, a drink maker in Nilai, a 90-minute drive from Kuala Lumpur, offers a line of health beverages with collagen ingredients such as fiber drinks, coffee and tea. The company uses collagen derived not from pigs, as is common in the non-Islamic world, but from cows or marine products.

"Thoyyib" is a word that indicates not only something that is halal, but also clean and healthy. This shrewd choice of name appeals to many potential customers. The company currently exports to Indonesia, the Middle East and Africa.

Malaysia wants to be a halal hub, building an export industry by attracting companies from around the world. A further selling point is that halal products can appeal to non-Muslims as well because they are pure and healthy. Halal-certified cosmetics, for example, are made mostly from plants.

Japanese companies, especially those hoping to expand overseas, are boning up on halal production methods. The Aeon Bandar Utama store, operated by Japanese supermarket chain Aeon, for example, posts its halal certification at eye-catching bakery section near the entrance to let customers know it conforms to Islamic dietary practices.

Even for domestically focused Japanese companies, it is important to know something about halal goods to meet the needs of a flood of Muslim visitors taking advantage of the weaker yen. Last year, Japan received a record 13 million travelers from abroad.

Yamaichi, a food trading company based in Takayama, in central Japan, has been discussing halal foods with city officials, other trading houses and experts to make Muslim visitors feel more at home. Yusuke Nakagawa,  a director with Yamaichi, said that travel agencies often tell him they would send more tourists his way if their customers could be sure of finding halal-certified products at their destination.