CEO in the news: An Australian brings change to a Singaporean family business empire CEO Grant Kelley is adding a financier's touch to the 53-year-old company. (Photo by Yumi Kotani)

The 51-year-old Australian has used his background in fund management and as a business consultant to return CDL, a property and hotel group, to a sustainable growth trajectory.

The outlook has been gloomy for some time, however. Demand for housing in Singapore softened over the last three years after the government moved to curb speculative buying. Hotels and tourism have meanwhile been hurt by economic uncertainty in key markets, including the U.S. and Europe. On May 11, CDL announced lackluster financial results for the first quarter, with net profit falling 14.4% from a year earlier to 105.3 million Singapore dollars ($78 million). The share price of CDL fell 0.9% to S$7.97 on May 12 but rallied to $8.77 by June 10. 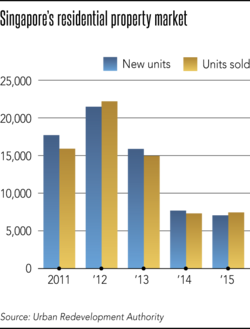 "We are long-term bullish," Kelley told the Nikkei Asian Review.

Always jovial and friendly, CDL's chief executive is upbeat about the potential of a carefully considered overseas expansion plan and a new fund management business.

Overseas, CDL is focusing on Australia, China, Japan, the U.K., and the U.S. Kelley expects property developments overseas to turn profitable in the second half of the year. "In time," Kelley said, "overseas contribution to EBITDA [earnings before interest, taxes, depreciation and amortization] will be significantly higher."

TAKING THE REINS Kelley became chief executive of CDL in January 2014, after 25 years in private equity funds and management consulting in Asia, Europe and the U.S. An Adelaide native, Kelley has a master's degree in international relations from the London School of Economics and an MBA from Harvard Business School.

He is known in the Asian property and financial communities for some big deals. As Asia head of U.S. fund Colony Capital, he led the acquisition in 2004 of Fukuoka Hawks Town, a Japanese resort and commercial complex, and the purchase of Singapore's renowned Raffles Hotel in 2005.

Kelley is not a proponent of the "crash and burn" approach favored by some of his peers in private equity, who chop and change management. Instead, he advocates a long-term, deep commitment to nurturing businesses.

"I draw more from my earlier career as a management consultant," he said. "Ultimately, you have to win over hearts and minds. You have to reengineer processes -- you must make a company more productive."

Kelley was picked as an outsider to run the family business by Kwek Leng Beng, the executive chairman of CDL, whose father, Kwek Hong Png, founded the Hong Leong group. Seeking a better life, Kwek Hong Png left his home in Fujian, China, in 1928 and boarded a cargo vessel bound for Singapore. The younger Kwek proved his business acumen as the managing director of CDL from 1974 and became an executive chairman in 1995, after his father's death.

The company was started in 1941 as a chandler supplying ropes and nautical supplies. Property investment was added in the 1950s and 1960s, and a land bank was amassed ahead of Singapore's subsequent massive economic development. As property prices rose, Hong Leong prospered and expanded.

The conglomerate has since moved into property development, hotels, finance, manufacturing, and building materials. It has a parallel presence in Malaysia, where the group, including Hong Leong Financial Group, is run as a separate conglomerate by Kwek's cousin, Quek Leng Chan.

CDL became the core publicly traded entity of Hong Leong group in Singapore after the property developer was acquired in 1972. It has since made a major contribution to the Singapore skyline, with 36,000 residential units to date. It is also a major landlord with more than 370,000 sq. meters of rental space.

With a history dating back to pre-independence and a respected family name, the company has a prestigious place on the nation's business scene. It trails state-owned rival CapitaLand in terms of market capitalization by close to 40% and is still recovering from the damage done by the financial crisis of 2008. CapitaLand was established in 2000 through a merger and launched its expansion in China and the region earlier, establishing it as the largest developer in Southeast Asia. 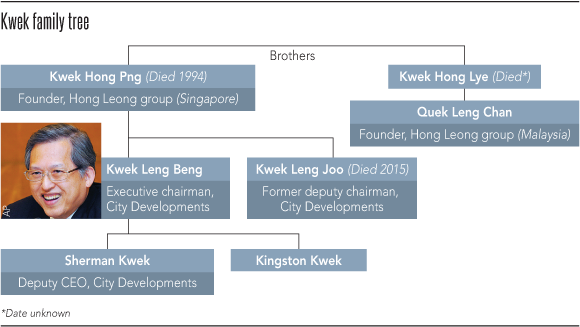 CDL moved more slowly on property development outside Singapore, despite a long-established global presence in the hotel business. Investors and the Kweks have both known that this had to change.

NEXT GENERATION Preparations for a succession from the second generation to the third generation are ongoing. Kwek Leng Joo, Leng Beng's younger brother, who died of a heart attack in November 2015, had stepped down from his managing director role in January 2014, when Kelley was appointed. Leng Beng's son and Leng Joo's son took up senior management positions in April 2014. Leng Beng's plan is to create a hybrid using family management and outside business expertise. Sherman Kwek, the chairman's oldest son, built up the group's investment portfolio in China. He was appointed deputy CEO in April. Sherman has also been heavily involved in Japan, where CDL has developed a luxury condominium on the site of the Seiko founder's mansion in Tokyo's upmarket Shirogane district. The third-generation Kwek continues to spend a lot of time overseeing projects in Tokyo.

Leng Beng wants Kelley to modernize and toughen CDL. "We need to change and evolve," he said. At the time of Kelley's appointment, Leng Beng said the Australian would "bring fresh perspectives to a rapidly changing and competitive business landscape."

The two men first met in 2005, shortly after the acquisition of Singapore's Raffles Hotel and its worldwide associate hotels. Kelley came to view Kwek as something of a mentor and regularly called in on him "to pay my respects." The relationship developed, as did mutual trust. "I have always admired him for his business acumen," Kelley said. Leng Beng reciprocated by investing in the property investment fund Kelley founded after he left Colony Capital.

"I rely enormously upon our chairman's experience, his judgment and his mentorship to help guide investment strategy," said Kelley. Kelley contributes to the globalization drive with his honed financial skills. "I benchmark myself by asking if I have brought technical value to the company -- that is very much my mission."

That technical value should provide a new layer of armor in an Asian family-owned company that typically relies on person-to-person relationships.

CDL has teams on the ground scouting for opportunities in every major overseas market. In May, the company acquired an office property in Shoreditch, London's equivalent to Silicon Valley. It was an "opportunistic" buy, according to Kelley, following a series of residential developments in London.

CHINA BULL Kelley is especially bullish on China, even after the economic slowdown.

"Sometimes, Western commentators don't do enough homework on the specifics of the submarkets in China," he said. "While it is easy to talk about macrotrends, real estate is essentially local."

The company is focusing on select residential developments in the upper-middle to luxury segments in three Chinese cities: Shanghai, Chongqing, and Suzhou. Shanghai is the commercial capital, and the other two cities benefit from the Chinese government's efforts to boost domestic consumption. Sales so far are "very, very robust," according to Kelley.

CDL has already invested about 75% of S$800 million that was set aside for China in 2010. "The market has so outperformed our expectations that I could quite comfortably recommend to the board that we allocate more capital for China," Kelley said. He sees a strong possibility that CDL will be acquisitive in China in 2017 and 2018. The company's overall land bank overseas for residential development more than doubled after Kelley came on board, from 940,000 sq. feet at the end of 2013 to 2.17 million sq. feet two years later.

Kelley has been more personally invested in working on fund management, however. In 2014, CDL announced two securitization deals modeled as profit participation securities. Using this approach, some cash-generative properties were bundled up and securitized to sell to investors. This enables the company to free up capital from property it owns for recycling in new investments, thereby reducing borrowings.

The stock market is anxiously waiting to see these initiatives bear fruit. Once the income from overseas projects starts to come in later this year, the market will reward it, said Lock Mun Yee, a property analyst at CIMB Research. "CDL is moving to new markets," she said. "There may be a learning curve, but the playing field gets bigger." City Developments has built and owns major buildings in the Singapore skyline. (Photo by Yumi Kotani)

Since 2014, Kelley has been pushing ahead with a diversification plan dubbed the "5-5-5 strategy." He aims for S$5 billion in property acquisitions overseas and S$5 billion of funds under management, all within five years. Kelley describes this as "a stretched target to galvanize the team."

By the end of 2015, the funds under management had reached S$2.6 billion, and S$2.3 billion had been invested overseas.

ASIAN SUPERMEN Kelley's role is crucial, given the generational transition continuing in tandem. In a recent report, Marleen Dieleman, an associate director at Singapore's NUS Business School, described leaders of Asian family-owned businesses as often being "supermen" of sorts -- patriarchs who are successful, visionary and frequently self-made. Generally speaking, they have learned to follow instincts and to "swim against the current."

"When the business approaches a certain level of maturity, the limitations of such a leadership style become apparent," said Dieleman, observing that a transition to a more complex organizational structure is then needed.

"It is only a matter of time before we see this in Southeast Asia as well," Dieleman said. "To regard outside CEOs as mere seat warmers may not do justice to the important role they can play."

In a region built on traditional Chinese-style family businesses, CDL is blazing a trail with Kelley -- and the market is watching closely.