CEO in the News: SM Investments breaks the mold with outside appointment MANILA In late April, SM Investments, the largest conglomerate in the Philippines by market value, announced big changes in its senior management. Teresita Sy-Coson, the eldest among the six children of the group's founder, Henry Sy, said the move represented a "natural evolution" of the family-owned business. "We are [now] more or less advisers," she said, referring to family members. "Some of us are nonexecutives so that it will go beyond a family business," she told the Nikkei Asian Review.

Investment banking veteran Frederic DyBuncio, 57, was appointed as SM president in a move to introduce outside professionals to the group's top ranks. In recent years, the family has been assigning professional, non relative managers to lead various operating companies, but DyBuncio is the first such executive to head SM Investments, the parent company. An immigrant from Xiamen, China, Sy founded the company after World War II. He started out selling imported shoes in a shop in downtown Manila and expanded the business through the help of his children.

SM is now regarded as a proxy for the Philippine economy since it owns the country's largest bank, BDO Unibank; its largest real estate developer, SM Prime Holdings; and its largest retailer, SM Retail.

The management reshuffle saw the official retirement of Sy, who is now chairman emeritus, and the promotion of longtime finance chief Jose Sio to chairman. Three of Henry's six children remain on the board: Henry Jr. and Teresita as vice chairpersons and Harley, the former president, as executive director. "I believe one of the expectations ... is to really see what other growth areas are there for SM outside of the core businesses [to] increase the future value of the company," DyBuncio told the Nikkei Asian Review recently.

In August 2011, DyBuncio was recruited by Teresita as a senior vice president in charge of portfolio investments outside core group businesses. Since then, DyBuncio has led the group's expansion into mining, geothermal energy, business processing outsourcing offices, logistics and worker dormitories.

With SM looking to enter new high-growth sectors, DyBuncio was seen as a natural choice to lead the conglomerate.

ELITE BANKER DyBuncio, a Chinese Filipino, obtained his business management degree from Ateneo de Manila University and MBA from the Asian Institute of Management in Manila. Before joining SM, he spent more than 20 years at JPMorgan Chase and its predecessors. He occupied managerial and executive positions in Manila, New York, Seoul, Bangkok and Hong Kong, handling relationship management and origination, capital markets, investment banking and other duties. He got to know Southeast Asia's biggest companies while in Hong Kong.

In 2007, he helped SM issue its first dollar-denominated bonds and as a result got to know the Sys.

DyBuncio said he had mixed feelings about accepting the promotion to president. "[I'm] excited because it is a great opportunity and there is a great deal of trust that went with it, but at the same time concerned that expectations are also quite high," he said.

As the de facto chief executive, DyBuncio will focus on crafting corporate strategy and overseeing operations, including searching for new business opportunities. But he will be less involved when it comes to the core businesses of banking, real estate and retail.

"His involvement is to take more of an advisory role as and when needed" at these core units, said Corazon Guidote, the senior vice president for investor relations. "Particularly for banking, there is a glass ceiling we need to observe."

"All the core businesses of SM have separate working boards with independent directors supported by experienced and mature management teams," she added.

Although DyBuncio will head the holding company, he will have little say at any of the core businesses since he is not a director at them. "We are at the point where the core businesses of the group are of sufficient scale and size that they are pretty much on their own," he said.

The family intends to sustain control by implementing an evolved hybrid governance structure to serve both company and family interests.

FAMILY TIES DyBuncio said the Sy family members, who have chosen their respective sectors to focus on, are ready to provide advice. He meets weekly with Teresita, who oversees banking, retail and the holding company, and with Harley, who also takes care of the parent company.

"They are less involved in the day-to-day [operations], but in terms of strategy and policies, they are still very involved at the board level," DyBuncio said, adding that having the Sys on the board enables the company to keep its entrepreneurial culture.

At other conglomerates in the Philippines, like Ayala Corp. of the Zobel family and JG Summit Holdings of the Gokongwei family, the president or chief executive, who is part of the family, sits on the boards of the major operating subsidiaries to ensure control.

Astro del Castillo, an analyst at Philippine investment house First Grade Finance, said he does not see any problem with SM's structure. "'Why fix it if it's not broken' is a normal management tack," he said. "I'm sure [DyBuncio] will intervene when needed." Investors have welcomed the leadership change. From April 27, when DyBuncio was promoted, through June 9, SM shares gained 9.6%, outpacing the 4.3% rise in the benchmark Philippine Stock Exchange index in the same period. "Fund managers like the fact that SM is professionalizing its management," del Castillo said.

Hiring outsiders to fill top management posts does not mean the family is relinquishing control. DyBuncio and Sio need to facilitate a smooth leadership transition to the third-generation members, some of whom are interested in taking leadership roles in the future, Sio said.

Sio, a long time associate of Henry Sy and considered a part of the family, knows the Sys well, including those with the potential to lead. For his part, DyBuncio could provide a global perspective on succession processes.

DyBuncio said he will put in place professional "policies, procedures, governance and compliance" practices for the "third-generation [members] who might want to join and are qualified to join." He added that the family wants SM to endure for the generations to come.

OVERSEAS EXPERIENCE Some company procedures, he said, need to be improved. "Sometimes [there] are multiple approvals which may not necessarily be required all the time," he said. "We can streamline the approval process."

DyBuncio also said SM will favor applicants that have some experience working overseas.

The next generation Sys have all attended overseas universities -- unlike the second generation, which studied at Philippine universities. This makes them suitable candidates for demanding jobs.

Around half of the third-generation Sys are already being trained at affiliated companies, at least one of them at an overseas unit. "They need to start from below the middle level," Teresita said.

DyBuncio does not have a guaranteed contract period, so he needs to execute his plans successfully and satisfy shareholders to keep his job. SM's recurring net profit in the first quarter rose 8% to 7.7 billion pesos ($155 million) year on year, failing to achieve double-digit growth for the first time in five years, as sluggish retail earnings amid intense competition offset higher profits in the banking and real estate businesses.

SM's first-quarter results logged growth of 11-13% during the 2012-2016 period. In 2013, they jumped 22% after bank earnings surged on higher trading gains, according to data compiled by The Nikkei.

DyBuncio's challenge is to make sure new investments, his focus for the past six years, bolster the group's maturing core businesses, which in some sectors, like retail, are nearing saturation.

For instance, SM in March purchased a 34.5% indirect stake in the 2GO Group, an end-to-end logistics provider.

The investment came with SM looking at e-commerce to boost retail sales as more shoppers do their buying online. In the e-commerce game, a reliable delivery system is vital. 2GO is controlled by Dennis Uy, a Davao-based businessman and top campaign donor to Philippine President Rodrigo Duterte.

Uy also owns Phoenix Petroleum, where DyBuncio was recently made a board member. Uy's group is building a casino in Cebu, a venture SM could join, given its experience in leisure property development.

REGIONAL FOCUS DyBuncio is also considering prospective investments in Southeast Asia, a region he covered for many years as an investment banker in Hong Kong. He said investment banks have been pitching ideas, but that the company will be cautious.

"We would rather be careful and make the right investments than rush into something just because everybody else is rushing in that space," he said. "We will take a more pragmatic approach, especially in a foreign country." He said SM Prime, which owns seven malls in China, would likely be the first group company to expand in Southeast Asia. 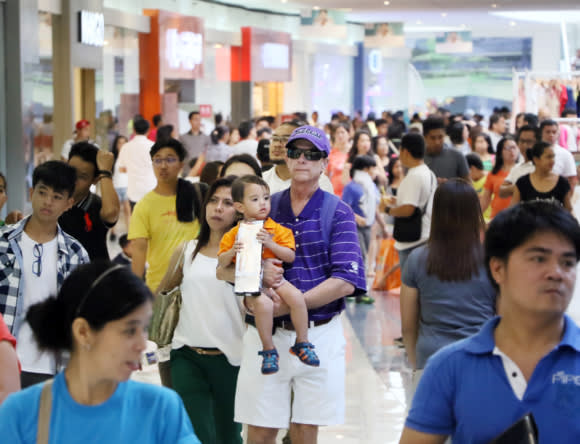 SM's shift toward professional top executives represents a milestone for the Philippine corporate sector, which is dominated by family businesses. Whether other companies follow suit could rest on DyBuncio's success.

"It is not very common for family-owned organizations to be transferring leadership to nonfamily executives, partly because of our culture as Filipinos," said Pilar Tolentino, assistant director of the Family Business Development Center at Ateneo de Manila University. "We tend to be protective of the wealth and image of families. Tolentino went on to say that to succeed, owners and professional managers should share the same values.

DyBuncio said he looks to SM founder Sy for inspiration. "On a day-to-day basis, I need to make sure I take care of what he has built and to grow it further," he said. "Even when we look at things and discuss things, we always have this in mind: Is this something which Mr. Sy would have done?"