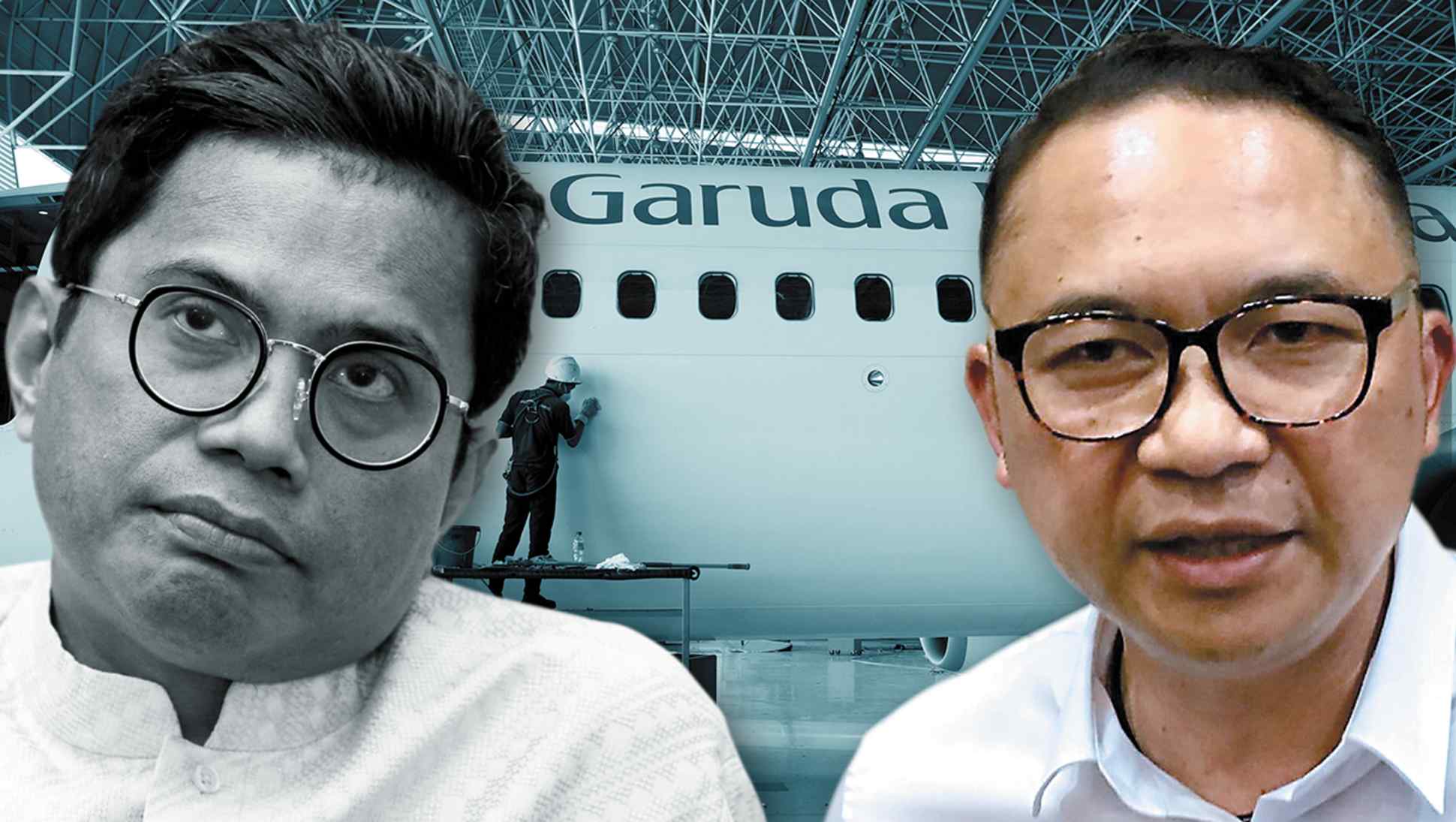 JAKARTA -- Just as employees at Garuda Indonesia were waking up on the morning of Sept. 17, an email from their new chief executive landed in their inboxes. Askhara Danadiputra had taken control of the embattled airline five days earlier and was eager to emphasize that the new boss would not be the same as the old boss.

Aside from the usual CEO talk of prioritizing innovation and avoiding complacency, Danadiputra promised improvement on a more personal level. "The board of directors will focus on improving employee capacity and making employees happy," he wrote. "With employees who are happy, then by themselves the employee will provide the best service to the customer."

Danadiputra, who had come from state port operator Pelindo III, was echoing what he told reporters just after his appointment. It is a message he obviously wants to hammer home, after the relationship between management and the labor union broke down under his cost-cutting predecessor, Pahala Mansury, who was CEO for just 17 months.

Danadiputra, also known by the nickname Ari Askhara, had been laying the groundwork for a labor-management detente even before Mansury was sacked.

In discussions with the union in the weeks before his appointment, he offered assurances that any cost reductions at the expense of worker welfare would stop. Danadiputra apparently knew he was in line for the top job and wanted things to run smoothly.

Mansury had found the 60% state-owned airline in a dire state when he took over in April 2017. An expansion drive under the former chief executive, Arif Wibowo, had left the company with several unprofitable routes. Net profit had plunged nearly 90% in 2016, as rising fuel prices and intense competition with budget carriers like AirAsia and Lion Air -- Indonesia's largest private airline -- took their toll. 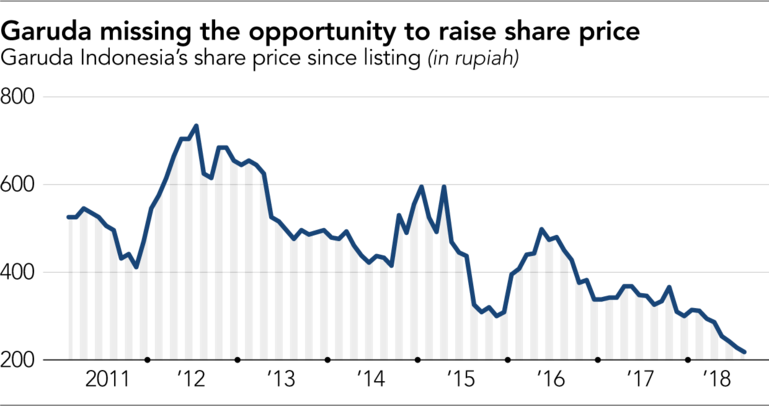 Reducing outlays came naturally to Mansury, a former director of finance and treasury at state lender Bank Mandiri. He had Linggarsari Suharso, the director of human resources, ax employee perks such as rides that took pilots to airports before their flights.

Labor threatened to strike unless management was changed. The union backtracked in July, after mediation by the Ministry of State-Owned Enterprises, but continued to lobby behind the scenes for new leadership.

Airline workers, especially pilots, have strong bargaining power. Fill-ins are difficult to find, especially amid an industrywide pilot shortage. So if captains do not fly, neither do passengers.

The government, afraid of the damage a strike would inflict on Garuda's brand, bowed to the pressure and brought in Danadiputra. Including Mansury, six Garuda executives were replaced. Six of the airline's eight board members now hail from the airline itself.

Danadiputra was, in a way, the ideal candidate to restore calm.

He was already familiar with Garuda, having served as the airline's director of finance and risk management from 2014 to 2016. And he had shown a knack for boosting morale as president of Pelindo III. He increased annual leave to 14 days from 12, and introduced 10 days of paternity leave for men. He also instituted casual clothing days, and he would switch off lights and stop the elevator at 6 p.m. to encourage workers to go home.

All that, by his account, contributed to Pelindo III's 18% rise in net profit for 2017.

At Garuda, the labor dispute may be out of the way for now, but Danadiputra will still need to address the other issues Mansury ran out of time to fix.

A priority for Mansury was increasing the carrier's load factor, which measures how full flights are. For the first half of 2018, Garuda's figure was 72.8%. That was well below the levels at Asia's premier airlines, like Cathay Pacific's 84.2% for the same period, and Singapore Airlines' 82% for the three months through June.

"The fundamental issue is that the brand strength is not very strong," Michel Brekelmans, managing director with consulting firm SCP/Asia, said of Garuda. "Compared to a Singapore Airlines or Cathay, passengers don't have a strong affinity with the airline. The result is that premium and long-haul passengers, who typically provide the bulk of profitability for flag carriers, don't like to travel with Garuda." There is also the challenge of Garuda's problematic international and domestic expansion. Under previous CEO Wibowo, Garuda opened a direct route between Jakarta and London's Heathrow, along with flights to less-connected, underdeveloped eastern Indonesia.

But the airline has struggled to fill seats on the flight, forcing it to offer steep discounts to sell tickets on some routes. The carrier's passenger yield -- revenue earned by flying one passenger 1 km -- stood at 6.7 cents for the year through last December, down sharply from 9.65 cents five years earlier.

In comparison, Singapore Airlines yielded 10.2 Singapore cents, or 7.5 U.S. cents, for the year ended in March.

"The international market remains challenging and is more strategic than profitable, in particular long haul," said Brendan Sobie, an analyst at CAPA Center for Aviation, a market-research specialist.

In the past, Garuda's domestic operations had offset losses from long-haul international flights, Sobie said. But with the domestic market suffering from overcapacity and lower yields, he added, "you have losses overall."

Garuda posted a net loss of $116 million for the first half of 2018. That was better than the $281 million loss a year earlier, but the airline is still on course for a second consecutive year in the red.

Mansury began slashing unprofitable routes, halving the number to 11 by the end of June 2018. Shortly before he was fired, he announced an end to the Jakarta-Heathrow flights. Sobie believes the London route had not generated "a high enough yield to even approach break even."

Despite the progress, investors were losing patience. Garuda's shares, listed on the Indonesian Stock Exchange, have fallen more than 30% since the start of the year. The stock hit a record low of 199 rupiah (a bit more than 1 U.S. cent) one trading day before the CEO change was announced.

Market capitalization stands at $365 million, a fraction of Singapore Airlines' $8.3 billion and less than half of close rival Thai Airways International. 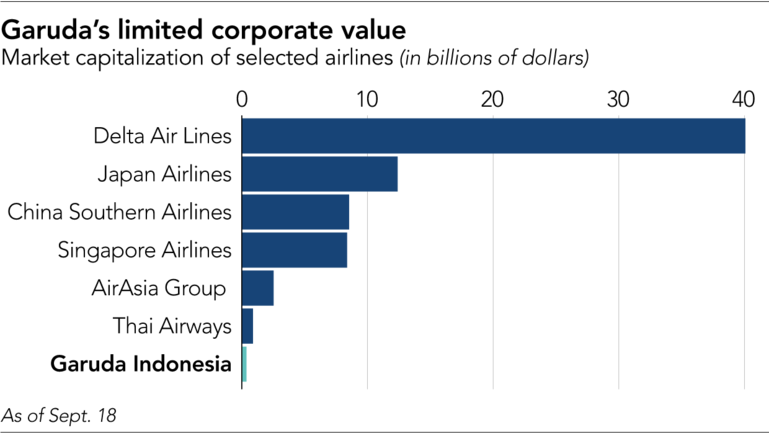 Before he was ousted, Mansury hoped to assuage investor concerns by pursuing joint ventures with other airlines, in a bid to increase the load factor. He even ditched Garuda's partner of five years, All Nippon Airways, to strike a surprise partnership agreement with Japan Airlines.

Not only did the deal offer Garuda more routes to the U.S. through a code-share arrangement -- something ANA was unwilling to give -- both companies planned to create a joint venture. That would enable each airline to treat the partner's flights as its own, allowing flexibility in making schedules, setting fares and determining transit times. It is not yet clear how the partnership will play out under Danadiputra.

Mansury's strategic road map until 2020 suggests he was eyeing other partners besides JAL. The plan proposes joint ventures on routes in North Asia, the Middle East and Europe -- a sensible strategy given Garuda's limited ability to serve these markets on its own.

Even as he strives to present a contrast from Mansury, Danadiputra has acknowledged the need to retain some of his predecessor's policies. "We will continue to carry out measures that were having a positive effect," he told reporters after his appointment, including cuts to loss-making routes.

But in cutting routes and potentially implementing his own reforms, Danadiputra will have to deal with the inevitable political meddling.

Garuda is no stranger to that. The carrier opened the routes to eastern Indonesia partly due to the government's demand that it should serve the underdeveloped area.

Emirsyah Satar, Garuda's CEO from 2005 to 2014, resigned before his second five-year term was up, amid rumors of a disagreement with President Joko Widodo, who was elected in 2014. Satar denies any disagreement with Widodo. Danadiputra received a reminder from his political masters just before he took the job. The shareholders meeting to confirm his appointment was delayed by nearly two hours, over disagreements between some cabinet members. A certain minister favored Danadiputra and the new board members, while another was pushing for other names.

Danadiputra now has to deliver. And the penalty for Mansury may not be all that severe.

The day after Mansury was fired, he was named finance director at state oil and gas giant Pertamina. It might seem like a demotion. But at least, he is earning more money.