© Bloomberg/Getty Images
CEO in the news

This rare earths miner is tiny: Why are so many people obsessing over it?

After five years as Lynas CEO, Amanda Lacaze has almost seen it all

SYDNEY -- Creditors banging at the door? Financial collapse imminent? All part of the fun for corporate turnaround specialist Amanda Lacaze.

Since taking the helm at Australian-listed rare earths miner Lynas in 2014, Lacaze has become embroiled in a political row with geostrategic implications that make the company's former balance sheet woes look mundane.

In the last 12 months alone Lacaze has seen the company share price plunge nearly 50%, dealt with a regulatory snag that brought production to a halt for a month, and fended off a hostile takeover bid. Despite all that, she appears to have come out on top.

"It's had every challenge there is," Lacaze told the Nikkei Asian Review, reflecting on her tenure after first quarter results showed Lynas cracking 100 million Australian dollars ($72 million) in revenue for only the fourth time in its 37-year history.

"I'm very cautious now about saying that the degree of difficulty can't get any higher," she said.

Through its Mt Weld mine in Western Australia, Lynas controls one of the world's most concentrated deposits of rare earths, those 17 exotic metals such as neodymium and praseodymium (NdPr) that are vital to the defense and renewable energy industries, as well as makers of smartphones, television screens and countless other consumer goods.

With China controlling around 90% of the supply chain, and the threat of a global trade war still in the air, Lynas is now one of the world's most important alternative suppliers of rare earths. That makes it a company of intense strategic interest to policymakers in the U.S., Japan and Europe who worry about Beijing's growing power.

"It's a real geopolitical issue," said Lacaze, of international concerns surrounding China's grip on the rare earths market. "It has the attention of various governments around the world."

If China cut off the supply of rare earths -- as it did to Japan in 2010 -- it could slow, or even stall, production in many of the world's factories.

Dudley Kingsnorth, a professor at Curtin University's Centre for Research in Energy and Minerals Economics in Western Australia, says that even with alternative suppliers such as Lynas continuing to grow market share, China will remain the dominant rare earths supplier -- and consumer -- for the foreseeable future.

"China will sell you wind turbines and electric vehicles, but it wants the jobs associated with their manufacture to stay in China," Kingsnorth told Nikkei. "It wants to own the EV industry."

For Lynas, digging up rare earths at its Mt Weld mine and then shipping the concentrate to its AU$1 billion state-of-the-art chemical processing plant near Kuantan in Malaysia, is the easy part. Turning them into valuable oxides and carbonates -- a 1 ton bag of NdPr is currently worth around $40,000 -- that it can sell to customers in Japan, China, South Korea, Europe and North America, is messy. Since the plant was commissioned in 2011, it has left behind a 450,000 ton pile of slightly radioactive waste.

Mahathir has made it clear that unless Lynas can find a way to run the plant without producing radioactive waste, then its operating license could be canceled. The regulatory uncertainty has sent Lynas shares from a high of AU$2.89 last May, right before Mahathir was elected, to a low of AU$1.51 in December.

That is where the shares hovered until last month when, sensing weakness, Australian retail and chemicals conglomerate Wesfarmers blindsided Lynas with an unsolicited AU$1.5 billion takeover bid. While that lifted the shares back above AU$2, many analysts remained skeptical.

"We value the business at AU$3.50 a share, which importantly does not include any production growth or reserve upside," Dylan Kelly, an industry analyst at CLSA, told Nikkei. "We see the bid as highly opportunistic given the political uncertainty."

Lynas knocked back the offer with the support of key investors such as Japan trading company Sojitz, and Canada's Greenscape Capital.

But revelations that Wesfarmers had lobbied the Malaysian government directly with its own solution to the radioactive waste problem added to the pressure on Lacaze, forcing her to announce that Lynas was looking at five potential locations to remove the radioactive material before the rare earths reached Malaysia.

Emphasizing her respect for Mahathir, but remaining tight lipped about the Wesfarmers bid, Lacaze said that over the past six years the company had managed to clear four exhaustive environmental studies ''which says something about the motivation of those speaking out against Lynas."

It's all a long way from her home town of Brisbane, where Lacaze first completed a Bachelor of Arts degree at the University of Queensland, and began her journey up the ranks of some of Australia's biggest companies.

"I always wanted to be a CEO," said Lacaze, who is now 58. "And I wanted to be CEO of an Australian company, not a country manager [of a multinational]."

After rising to managing director for marketing at Australia's biggest telecommunications provider Telstra, and then a stint running the Australian arm of online service provider AOL, Lacaze got her chance to lead an Australian company.

Appointed chief executive officer of then struggling Orion Telecommunications, Lacaze not only established her reputation as a corporate leader, but also as someone who could develop and implement an effective turnaround strategy. "A lot of my real foundation goes right back to being the fourth child [of five]," recalls Lacaze, attributing her ability to engage in Australia's rough and tumble corporate world to the way she played rugby with her three older brothers as a six-year-old.

In a business career that has seen her fight bankruptcy, hostile takeovers, and real world politics, Lacaze says that in terms of her past experience, she has not left much on the table at Lynas. "I have had to draw upon all those lessons in this job," she said.

Valentina Josifovski, who worked with Lacaze at AOL Australia and Orion Telecommunications, says that while Lacaze does not shy away from taking on a challenge or making tough decisions, each move is underpinned by considerable thought and deliberation.

"By surrounding herself with good people and trusted advisers - in all facets of her life - Amanda gives all of herself to the companies she leads," Josifovski told Nikkei. "Amanda also has tremendous energy and an ability to engage her workforce so together they work to get the results needed."

When Lacaze was appointed CEO of Lynas, the company was trading at around 15 cents a share and was saddled with so much debt that it had, in Lacaze's words, "almost no money."

She wasted no time putting the company back on its feet. She slashed costs, improved efficiencies, and shifted the company headquarters to Malaysia to get things right at the processing plant.

As the efficiency improvements kicked in, and production increased, Lacaze used rising cashflows to pay down debt. She also began brokering deals with the company's major bondholders to convert debt to equity.

Within three years, cashflow had risen from AU$15.8 million to AU$25 million and the company's market capitalization had jumped from AU$386 million to over AU$1 billion. Group debt was US$165.2 million on 30 June 2018, against US$425 million 12 months earlier.

After nearly five years living in Malaysia, Lacaze last year delivered the company's first full year profit as a rare earths company. It reported net profits after tax of AU$53 million, against a restated loss of AU$500,000 the previous year.

"We are now actually a Malaysian company -- I think 97% of our staff are Malaysian," she said.

The company's share register also looks a lot different. Today it is dominated not by noisy retail investors, but by large institutions who have helped to provide much-needed stability.

Still, there will always be risks for a company of Lynas' size in a market controlled by Chinese players who can virtually command pricing.

With pressures including an uncertain regulatory environment, the need to find a permanent solution to the radioactive waste problem, and Australia's Wesfarmers breathing down her neck, it is just as well that Lacaze has the support of "a wonderful husband and three children who I actually like to spend time with."

Despite the intensity of her work profile, Lacaze insists that in real life "I'm actually a reasonably boring person you know." 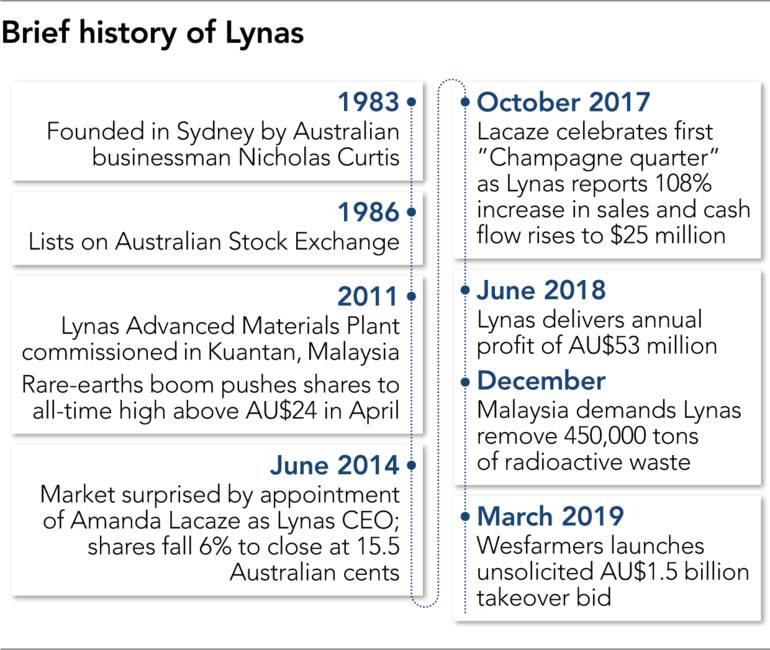