LAS VEGAS, U.S. -- Amazon is ramping up efforts to expand the market for its smart speakers in Asia through the launch of new products as well as increasing tie-ups with local device makers.

Echo is the name of its range of smart speaker devices, while Alexa is the artificially intelligent voice assistant that comes with it.

During CES, the world's biggest technology exhibition currently taking place in Las Vegas, the tech group announced that the international launch of Echo Auto -- a smart speaker designed for use in cars -- will kick off with sales in India next week.

The launch reflects the company's emphasis on some of Asia's key markets and on expanding use cases for Echo and AI assistant Alexa. 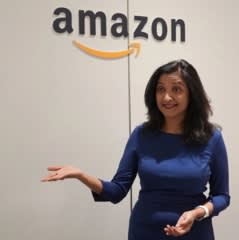 Amazon Echo has a strong share of about 70% of the smart speaker segment in the U.S., topping Google Home and Apple HomePod, according to Consumer Intelligence Research Partners. However, the market is still somewhat limited. According to Deloitte, even the countries with top adoption rates for smart speakers -- China and the U.S. -- remained at around 20% as of mid-2018.

Daniel, who spoke to Nikkei on the sideline of CES, avoided mention of China, which is already dominated by homegrown tech players like Alibaba and Baidu.

Big tech groups are all betting on voice assistants, including Google Assistant and Apple's Siri, to be the core operating platform in the age of the internet of things. Voice assistants link different devices, so that users can, for example, talk to a fridge to turn on the oven.

Daniel said Alexa was becoming "more proactive, contexual, conversational and more ambient." Rather than just telling Alexa to turn the lights on and off, which she admits is still the major usage, services like Alexa Hunches can alert users when devices stray from their usual patterns. For example, it could tell users that they had left the kitchen lights on, by learning when they are usually on or off.

Explaining how Alexa is becoming ambient, Daniel added, "you don't have to interact with Alexa, but she might show you some personalized things," such as a recipe for a chicken dish for your evening meal.

Expanding Echo Auto, Amazon's in-car smart speaker in Asia, is part of the company's push to establish its presence in a wider ranges of places and applications.

During CES, Amazon also showcased Alexa built-in to a Lamborghini sports car, a new addition to its auto partner brands including Audi and Toyota. While many uses for Alexa so far have been for home products such as appliances, "Alexa will go everywhere their customer goes," said Daniel. As well as cars, she said that it could be used in hotels, workplaces or in trains.

Amazon's CES booth was all about pushing the message that "voice is everywhere," she said, with everything from cars and watches, to earphones and mirrors compatible with Alexa.

Some of Amazon's 100,000 Alexa compatible devices are made by companies that have created their own voice recognition AI systems, such as Samsung. Amazon is keen to further expand its range of partnerships. "All of these voice platforms can co-exist. There are specialists for everything," Daniel said, adding that customers would choose the best for their own purposes.

Amazon recently surprised the industry by forming an alliance with Google and Apple for common connectivity standards. Blake Kozak, principal analyst at IHS Markit, said that Apple and Google "perhaps have the most to gain from this cooperation as they currently are more closed and less interoperable." Apple already has an obvious advantage in the form of its widely used iPhone range.

Since Alexa was released in 2014 for simple voice interaction, the service has come a long way, said Daniel. "[We are] just entering ambient computing, where Alexa is watching out for your home even if you are not there."

However, there are challenges to sustain growth. The uptake of voice assistants is also being hindered by privacy concerns, as some consumers are wary of being listened to all the time. "Privacy is foundational to everything we've done," Daniel said, explaining new features that were added to Alexa last year, such as enabling users to ask it to delete their data.

Likewise at CES, Apple's Jane Horvath, senior director in charge of privacy, told the audience that one of the major focuses at Apple was privacy by design.