China tells its CES participants to have IP certification in hand "We will cooperate with you," they are advised to say, if confronted by U.S. police during the exhibition.

"We have lawyers who represent us. So before you seize our products, we would like to speak with our lawyer."

That, at least, is the advice printed in pamphlets being handed out by lawyers staffing a free legal advice booth for Chinese exhibitors at CES 2020.

Intellectual property theft is a hot-button issue in the ongoing U.S.-China trade war, and China's Ministry of Commerce and the Chinese consulate in San Francisco -- who jointly sponsored the lawyers and the pamphlets -- are keen to help Chinese attendees deal with any disputes they may encounter.

Participants themselves, meanwhile, sounded a more optimistic note, especially on cooperation in cutting-edge tech like 5G, while the huge potential of the U.S. consumer market continues to attract Chinese tech companies.

Chinese authorities, however, are not taking chances. In a notice posted on its website last week, the commerce ministry reminded Chinese participants of an incident at CES 2016 in which U.S. marshals raided a Chinese hoverboard maker's booth amid a patent dispute with an American company. Trade tensions have kept some Chinese companies away from CES, but others say they are optimistic about continued collaboration with their U.S. counterparts. (Photo by Yifan Yu)

"According to our lawyers, incidents like this may happen again at CES this year. All Chinese exhibitors should pay serious attention to the risks and prepare accordingly," the post says.

All Chinese exhibitors should carry with them documents certifying their IP rights, the post continues, and reach out to the legal help station immediately if U.S. police show up at their booths.

Several Chinese exhibitors were picking up pamphlets at the legal help booth when the Nikkei Asian Review visited on Thursday. Asked if they were seeking legal advice over an IP dispute, one exhibitor said, "Luckily no. I'm just here to check out some information, because you know, you never know."

Chinese exhibition space at the annual trade show is projected to be 5-6% smaller than last year, according to the Consumer Technology Association, the organizer of CES. Official CTA statistics show 1,120 exhibitors from China attended last year, while 1,097 Chinese companies are listed on the 2020 CES exhibitor directory.

But those who chose to attend this year say they have seen less hostility between the two countries and more opportunities to work together, especially in emerging fields. 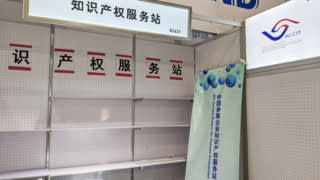 A free legal aid booth has been set up to help Chinese exhibitors deal with any intellectual property disputes they may encounter at CES 2020. (Photo by Yifan Yu)

"There are more conflicts in the world. ... The only way to solve this is through collaboration because science and technology should not have barriers," said Chris Chang, senior vice president of U.S. semiconductor supplier Semtech, at China Night, a CES side event held on Monday and organized by the Consulate General of China in San Francisco.

"The example I want to take is 5G standard," Chang added. "5G is not one invention, it is not about one wireless communication station, it is thousands of inventions around the world."

Chinese tech players agree that despite the political tensions, collaboration is the way forward. And there is also the appeal of the massive American market.

TCL and OnePlus, two Chinese handset makers, both chose to launch their flagship 5G smartphones in the U.S. first.

"The U.S. market is a top priority for our mobile business," Harry Hu, general manager of TCL's overseas operations. "We look forward to working with all our U.S. partners, including Amazon, Google and many more."

At China Night, Nevada Gov. Steve Sisolak was among the local leaders addressing the gathering of largely Chinese participants.

"We want to do more to improve the relationship between the state of Nevada and the people of China," Sisolak said, adding that he can not do anything about national tensions at a local level.

China's Consul General in San Franciso Wang Donghua also called for collaboration. "We will not challenge or replace the United States," Wang said. "China's growth is not a threat but an opportunity."

That friendly sentiment is not reflected at the national level.

"One of the great things about the 5G era is that it will enable all kinds of devices, billions more of them to be connected, but that also increases the risk of attacks surfacing from those who would look to abuse the network in order to create cybersecurity vulnerabilities. So the FCC and I personally have been spending a lot of time on this issue," Pai said. He cited the commission's ban preventing China Mobile from providing 5G services in the U.S. as a sign that such efforts are bearing fruit.

A truce in the ongoing trade war may be reached if China and the U.S. sign a phase one deal next week as expected. With the stakes high and the outcome far from certain, American and Chinese companies are not the only ones keeping a close eye on the situation.

Among those watching from the sidelines is German materials maker Merck, which is working more closely with Asian semiconductor manufacturers as part of its bet on 5G. "Ultimately if every country has its own supply chain, the industry will face challenges from the cost perspective," said Anand Nambiar, executive vice president at Merck. "The collaborative model will have to continue."