HONG KONG -- Hong Kong conglomerate CK Hutchison Holdings has begun reorganizing its infrastructure business, in hopes of accelerating acquisitions abroad by focusing its ample funds. As the slowdown in the Chinese economy progresses, the group is working to reduce its dependence on Hong Kong and China. 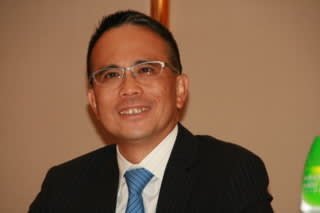 The current reorganization involves group firms Cheung Kong Infrastructure Holdings and Power Assets Holdings, both investment firms for energy operations. After trading closed on Sept. 8, CKI announced it will take over Power Assets via a stock swap, setting the ratio of Power Assets to CKI shares at 1:1.04. This makes the deal a major merger worth 89.8 billion Hong Kong dollars ($11.5 billion).

CK Hutchison will remain the primary shareholder in the new company, CK Infrastructure Assets (Holdings), with 49.19%. Speaking to the press, CK Hutchison Deputy Chairman Victor Li Tzar-kuoi emphasized that the merger will open new acquisition opportunities abroad, as the "infrastructure business is extremely capital-intensive. It is bigger the better."

The group's main aim for the merger is channeling Power Assets' massive cash hoard into CKI. In the process of acquiring companies in various industries, including Eversholt Rail Group of the U.K., which leases train cars, CKI reports its net cash at minus HK$10.1 billion.

Power Assets is holding cash assets worth HK$57.8 billion as of June 30, having spun off as a business trust Hongkong Electric, the sole electricity service supplier to Hong Kong Island, in January 2014.

Despite stable profit margins, electricity operations offer limited growth opportunities. While CKI has reported 18.7% average annual growth in net income between 2010 and 2014, Power Assets settled for just 2.9%. Dennis Ip and Scott Chui, analysts at Daiwa Capital Market in Hong Kong, even claimed in their report on Sept. 8 that Power Assets "has become a redundant company" after the spin-off of Hongkong Electric.

Once the merger is complete, the new company plans to pay a special dividend totaling HK$19.5 billion. A simple calculation shows it will still have nearly HK$30 billion on hand. Reflecting the slow markets for oil and other commodities, more infrastructure and energy operations may be for sale abroad.

CKI and Power Assets have had a strong cooperative relationship, jointly investing in 11 electric and gas firms in the U.K., Australia and Canada. The merger will allow them to more flexibly deploy their combined resources. Victor Li praised the deal as "bringing many advantages with no harm."

Some Power Assets shareholders, however, remain dissatisfied with the stock-swap ratio. The merger must be approved by at least 75% of independent shareholders, excluding group companies such as CK Hutchison.

In the press conference's final exchange, a local reporter asked, "Did you get your father's approval for this merger?" Victor responded with a wry smile, "Yes, of course."

Victor as CKI chairman led the merger project. Li Ka-shing, his father and CK Hutchison Holdings Chairman, as well as his right-hand man and Power Assets Chairman Canning Fok Kin-ning were not present at the press conference.

At the regular late-February press conferences to announce annual results, Victor has remained in his father's shadow. But the younger Li appeared to be in high spirits as he took charge of answering questions on the merger, which is seen as an opportunity to showcase his management skills in preparation for taking over operational control from his father, who turned 87 earlier this year.

In June, the group reorganized Cheung Kong (Holdings) and Hutchison Whampoa in areas where the holding firms' functions overlapped, and separated overseas-oriented operations like communications, infrastructure and retail from real estate operations in Hong Kong and China. It also moved the registered head-office address from Hong Kong to the Cayman Islands, a British Overseas Territory.

The merger deal has prompted observers to renew their conjectures on Li Ka-shing's next move. Speculation is rife that he may reorganize its retail and port businesses, perhaps spinning off A.S. Watson, which runs the Watsons drugstore business. Lee of Grand Finance Group said that the elder Li "seems to be moving away from Hong Kong and China and trying to expand globally with main focus on infrastructure businesses."

After the merger is complete, Power Assets, rooted in the over 120-year history of Hong Kong, will disappear, leaving no leading Hong Kong-based company in the group. The recent Li family strategy to move away from Hong Kong and China will then enter the completion phase.