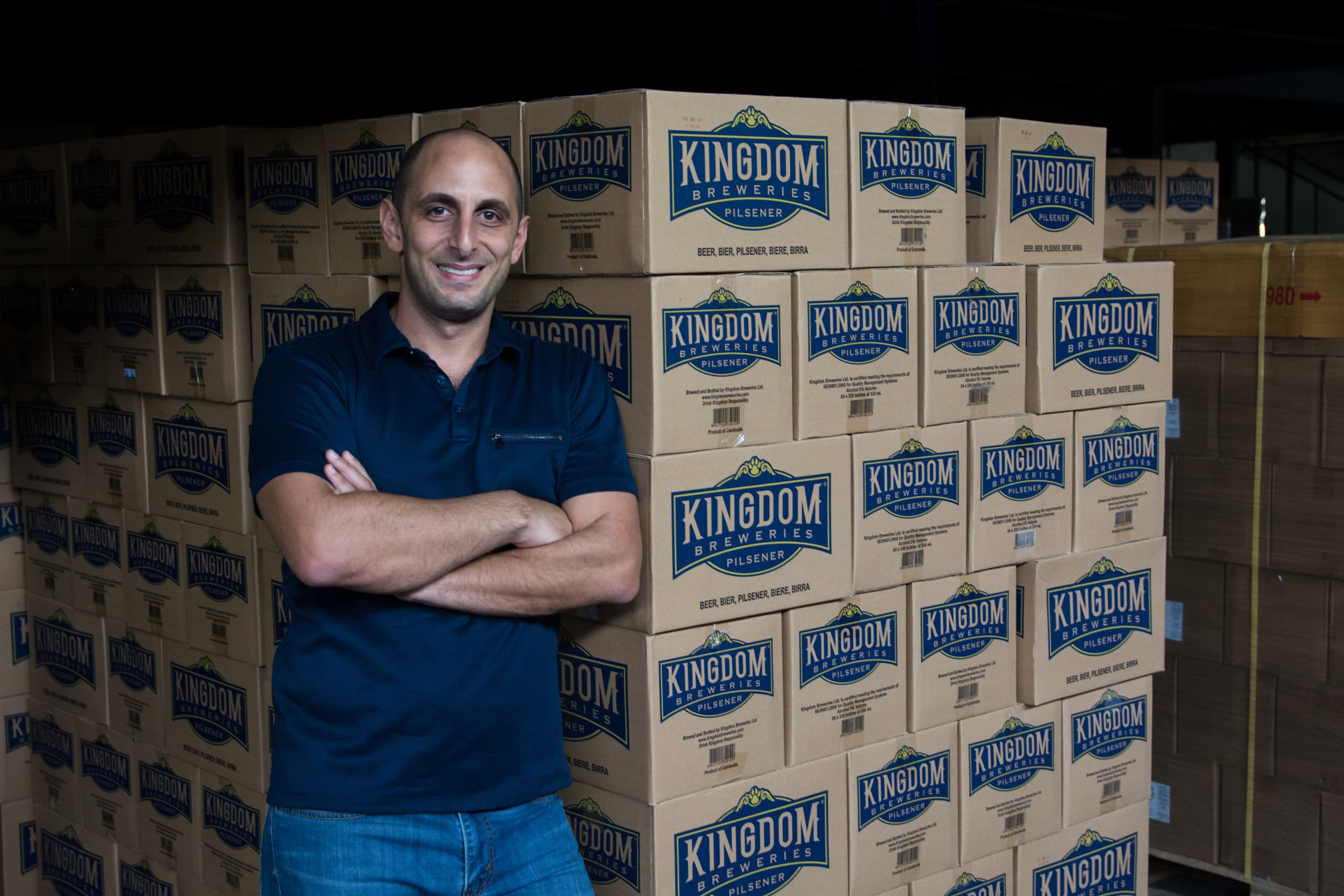 BANGKOK -- As the craft beer craze sweeps from West to East amid intensifying demand for diverse, flavorful beers, a microbrewery in Phnom Penh is positioning itself as one of the leading producers in the region.

Kingdom Breweries, launched in 2010 alongside the Tonle Sap river in the Cambodian capital, has gone from producing own-brand craft beers for the domestic market and Bruntys cider for local brand Asia Pacific Cider to making around 30 beverages for a dozen companies in Singapore, Thailand, Hong Kong, and the Philippines that lack their own breweries.

In Thailand, where strict rules block independent brewing, beer makers are increasingly looking to contract brewers to cope with expanding demand and to legitimize their operations.

"Going to Kingdom allows us to bring beer and sell it legally," said Mike Roberts, founder of Outlaw Brewing, which launched in 2015 as a brewpub in Thailand's northeastern Loei province and recently contracted Kingdom to produce its American-style India Pale Ale -- a development of a beer first brewed in 18th century England.

"A lot of us are getting busy, so we need to take the steps for volume, and brew at a proper brewery," said Roberts. He currently produces around 1,000 liters a month at his brewpub, but recently contracted Kingdom to make an additional 3,000 to 3,500 liters a month to cope with brisk demand. 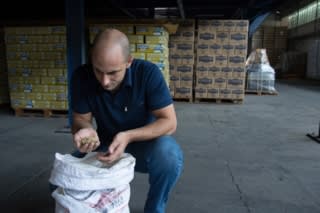 Kingdom recently ramped up total production to around 100,000 liters a month, about 50% of which is brewed for other companies, making it the leading craft beer producer in Southeast Asia, according to Lawrence Mackhoul, Kingdom Breweries CEO.

"We want to be Southeast Asia's brew hub for quality beers," said Mackhoul, who is also an associate partner at Leopard Capital, a private equity firm that has a 55% stake in Kingdom and investments in Asia and Haiti. The remaining 45% is owned by a trio of Hong Kong-based private investors.

In Cambodia, the company controls a negligible share of the beer market. But regionally, Kingdom has become the leading craft brewery, producing more than double the beer volume achieved by its main competitors in Hong Kong and Taiwan, Mackhoul told the Nikkei Asian Review.

"For Southeast Asia, we are most likely contract brewing more than any other contract brewer," he said, estimating that there are about five contract craft brewers in the region. Mackhoul declined to reveal financial details about the company, but said it was "financially sound."

The big shift in the company's operations comes as the craft beer revolution, which began in the U.S. and Europe about 30 years ago, gains ground in Asia. "Tastes are changing, people are more receptive to new flavors, to bolder tasting beers," said Mackhoul.

Cambodia's beer and bar industries are showing signs of diversity with the arrival of brewpubs such as Hops Brewery, Botanico and Cerevisia Craft Brewhouse in Phnom Penh. But when Kingdom launched, the country's beer scene was uninspiring and dominated by huge breweries, reflecting none of the excitement around beer in places such as Singapore and Bangkok. 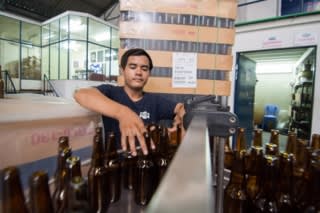 A Kingdom Breweries worker loads bottles onto a conveyor. (Photo by Alex Consiglio)

Mackhoul said Kingdom was not trying to compete with mass-market beers such as Angkor, made by Cambrew, part of the Carlsberg group, and Anchor, brewed by Heineken Asia Pacific, formerly Asia Pacific Breweries, which also produces the Heineken and Tiger brands.

But the big brewers' aggressive marketing and pricing strategies have made it difficult to win over the palates and purses of consumers used to paying 2,000 to 8,000 riel ($0.50 to $2) for a glass of beer. Kingdom's own-brand bottled beers, which include its flagship Kingdom Pilsner, a dark lager, and IPA brands, sell for around $3 or more.

"The big guys will give the bar a contract to put their beers on tap," Mackhoul said. In return, the bars get sponsorship deals and other promotions. "They make it challenging to get into certain bars."

Makkara Iv Thoun, owner of Barbados, a Phnom Penh bar popular with expatriates, said she stopped stocking Kingdom after buying a consignment about four years ago. Makkara said that "not enough customers asked for it," while locals "never drink it." However, she said awareness of Kingdom was low at the time, and its prices prohibitively expensive.

Mackhoul said the company's entry into the Cambodian market may have been a little early, but its potential was stifled more by management woes than market forces. "The idea was there; we had a good product; the timing was perhaps a little bit early, but the biggest issues were management."

In those early years, the company was being steered toward economy and standard products in a "deviation from our strategy," Mackhoul said.

In 2014 Leopard put its stake in Kingdom up for sale as part of its investment strategy to exit funds after a certain period. The offer drew a few interested buyers, and the company came close to sealing the deal with one party that was given a period of exclusivity in which to make the purchase. "But they were not able to come up with the full amount of funding required for the buyout in the allotted time," said Mackhoul. After the deal fell through Kingdom decided to take the company off the market and overhaul its management. Leopard hired British brewmaster Ian Leigh, who had more than 30 years' experience at big breweries including Scottish & Newcastle and Carlsberg China. Leopard also installed Mackhoul as Kingdom CEO. He scrapped the low and mid-range products, and turned the company's focus back to the premium segment.

With an established factory kitted out with top-of-the-range German equipment, a seasoned brewer, and a booming industry, offers soon began flooding in for contract brewing.

Brian Bartusch, co-founder of Bangkok's largest craft beer importer, Beervana, said Asia's beer industry is "very young and fresh, but far from its infancy," with Kingdom in a key position to capitalize on this growth if it can continue to produce high quality beers at reasonable prices.

Bartusch said Kingdom must also be open to "more experimental recipes beyond classic lagers," adding that, "a flexible brew house, qualified labor, easy shipping and [the liberal] tax and export restrictions of Cambodia are all factors" for success.

In the last couple of years, Kingdom has been pushing its own beer in Australia and Europe, with the U.K. now its biggest market after Cambodia. About 90% of the beer Kingdom produces is exported.

While there are still plans to crack more of Asia, entering new markets depends on finding good distributors and executing good marketing campaigns. "There is still a long way to go and a huge untapped market, further afield and in the small shops and rural areas where the cost of craft beer is still very prohibitive," Mackhoul said.

Most importantly, the company needs to find a partner that "believes in the brand," he said.