HONG KONG -- Surging Chinese investment into Cambodia swelled revenues for Phnom Penh casino operator NagaCorp by 82.5% for the first half of 2018.

The company, which has a 40-year monopoly on casino gambling in the Cambodian capital, last November doubled the hotel and gaming capacity of its NagaWorld complex with the opening of its $369 million Naga2 extension. Its rapid take off now has the company talking about another phase.

"At Naga2, we are already running at capacity," said Deputy Chairman Philip Lee at a briefing in Hong Kong on Wednesday. "So we are already planning for Naga3," he said, while declining to provide details.

According to Lee, Naga2 is attracting a new customer base, rather than drawing away gamblers from the complex's Naga1 phase which opened in 2006. "The bulk of them are Chinese," he said. "Perhaps they felt that Naga1 was not up to their standard."

"When Naga2 opened, suddenly it became the place with all the gold, flashing lights and everything," he said. "It was somewhere [the Chinese] wanted to be seen in."

"Because of the huge volume of investment from China to Cambodia, there is [now] such a big population of expat Chinese in Phnom Penh," Lee said. There are few alternatives to NagaWorld as a nightlife destination in the capital, he added, so for these Chinese businesspeople, "Naga2 was the right product at the right time."

NagaCorp previously worked with a number of Malaysia-based junket operators to bring in high rollers, but Naga2 enabled the company to lure Macau-based junket operators Suncity Group and Venus Group to open up VIP rooms in recent months. Suncity, one of Macau's largest junkets, is already seeking to further expand its presence, NagaCorp officials said.

Selected high rollers are being allowed to bet as much as $1 million a hand at Naga2. The new phase produced gross revenue of $5,700 per public table last month against $3,800 per public table at Naga1. The company now plans to use part of the $300 million it raised from a bond issue in May to upgrade Naga1. 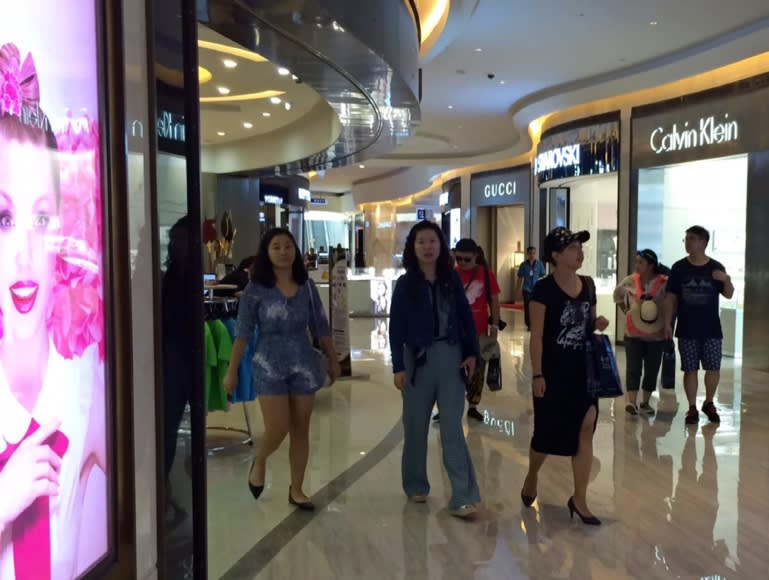 The company has also begun construction of its first overseas project, a casino hotel outside Vladivostok, Russia, but is still weighing whether to bid for rights in Japan following last week's Diet vote to proceed with casino development in the country.

"There's little doubt that Japan is a very attractive market," said Chairman Timothy McNally. "[But] we have not made any decision yet to move forward. We are looking at more guidance that is to be issued by the government concerning the regulatory environment," he said, citing taxes and access to land as particular concerns.

"It's a very appetizing market," he said. "Sometimes a big cake or pie looks good, but you don't want to bite off more than you can chew."

He forecast that construction on the first phase of NagaCorp's $350 million Russian project will be completed by the end of next year. "We are at a very fast stage" of construction, he said.

NagaCorp's continued push on Russia contrasts with that of Macau gaming tycoon Lawrence Ho Yau-lung, who last year sold off most of his investment in a casino hotel that is already open next to NagaCorp's site. Press reports at the time linked the disposal to a proposed doubling of government gaming taxes.

Noting that the local government ultimately decided to keep gaming taxes unchanged, NagaCorp's Lee said, "Essentially they actually listened to us as an operator."

Shares of Ho's Melco Resorts & Entertainment, which operates casinos in Macau and Manila, rose 3.7% in New York on Tuesday after the company reported a 57% increase in second quarter profit to $57.3 million. Profit gains at the company's Altira Macau and City of Dreams Manila properties offset declines at others.

Ho though affirmed his interest in bidding for a Japan license. "We've been running around Japan for over 10 years," he told analysts on a conference call. "We believe we are well placed in Japan with a strong local team actively working on the ground, engaging with the relevant stakeholders." He added that potential Japanese partners had been cautious about discussing cooperation before the Diet vote last week, but said he expected "matchmaking" to start now in earnest.