Can Cheng Yu-tung's business empire thrive without him?

HONG KONG When the wealthy and powerful flocked to the Hong Kong Funeral Home on Oct. 12 and 13 to pay their respects to Cheng Yu-tung, who had died at age 91, they were marking the loss of the first of a generation of rags-to-riches businessmen whose acumen and diplomatic savviness have for the most part been unrivaled by their successors.

As the founder of Chow Tai Fook Jewellery Group, the world's second-largest jeweler by market capitalization, Cheng earned a reputation for tact in forging ties with heavyweights in Hong Kong and beyond. His investment in a diamond business backed by Wen Jiabao's wife brought him close to the family of the former Chinese premier, according to The New York Times.

Cheng's funeral was a rare gathering of the business elite and dignitaries. His poker partner, billionaire Lee Shau-kee of Henderson Land Development, and Hong Kong's richest man, Li Ka-shing of CK Hutchison Holdings, were among the pallbearers. The funeral hall was filled with bouquets from mourners such as Zhang Dejiang, chairman of the standing committee of the Chinese National People's Congress, and Pony Ma Huateng, founder and chairman of the Chinese internet company Tencent Holdings.

Condolences included a message from Chinese Vice President Li Yuanchao, who said of Cheng, "Long live his contribution to the development of Hong Kong and the mainland." Observers said Li's gesture was more than common courtesy. The reason: Li was reportedly a beneficiary of a Cheng program that sponsored mainland officials studying at Harvard University. 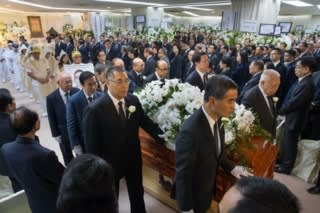 Cheng began as an apprentice at a Macau gold shop owned by a friend of his father, after fleeing his hometown of Shunde in southern China during World War II. Three years later, he married his boss's daughter, Chow Tsui-ying.

The jewelry business that Cheng inherited has since diversified into a vast empire that includes its flagship real estate conglomerate New World Development, bus franchises in Hong Kong, department stores in China and casino resorts in South Korea, Australia and Vietnam. At the time of his death, Cheng was estimated to be worth about $13 billion, making him the third-richest man in Hong Kong.

The tycoon was praised for his insight into succession. While most of his aging peers retained a firm grip on their businesses, Cheng decided that he would let his eldest son, Henry Cheng Kar-shun, try his hand as managing director at New World beginning in 1989. He officially handed control to his son months before he suffered a stroke in 2012 and disappeared from public life.

Still, Cheng's successors face growing skepticism regarding their ability to navigate the rising economic and political complexities in Hong Kong and mainland China. 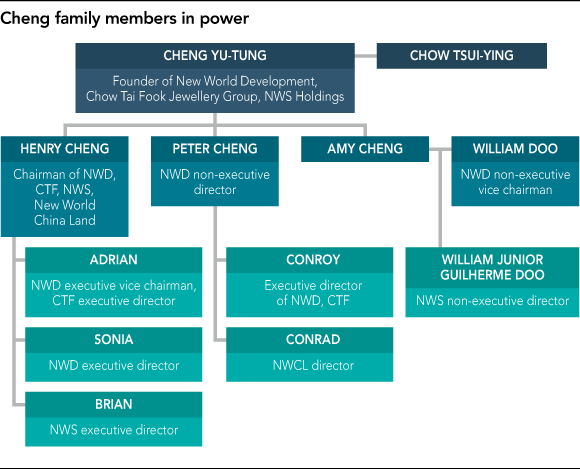 Unlike his father, who dropped out of school, Henry Cheng was educated overseas. He made an impression by quoting Charles Dickens and German philosopher Johann Wolfgang von Goethe in New World's annual reports, but his early track record of overexpansion unnerved investors. His bets on international hotel chains Renaissance and Ramada and on a now-defunct Hong Kong broadcaster led to losses and piled up debts for the group in the 1990s.

"[Henry Cheng] invested recklessly when he was in charge of New World at first," said Alvin Cheung, associate director at Hong Kong-based Prudential Brokerage. "But I think it [was] a very good experience for him, and now he is more mature."

In the 2012 election for Hong Kong's chief executive, Henry Cheng initially supported Henry Tang Ying-yen but abruptly switched his loyalty to the eventual winner, Leung Chun-ying. Asked if he would back the unpopular Leung for another term in the 2017 election, Cheng said he would support whoever becomes chief executive.

"He is too shaky in his bets," Simon Lee, a senior lecturer at The Chinese University of Hong Kong's business school, said of Henry Cheng. "It gives the impression that the next generation of leadership is still finding its way."

Adrian's younger brother, Brian Cheng Chi-ming, oversees the family's listed infrastructure arm NWS Holdings, while his sister, Sonia Cheng Chi-man, is tasked with expanding the hotel business. She led an $800 million deal in 2011 to take over U.S.-based Rosewood Hotel Group, which owns 19 properties, including the Carlyle in New York.

"The younger Chengs have tried to prove themselves, but whether they are able to make epoch-making decisions like their grandfather remains to be seen," said Lee. "K11 is far from mainstream ... and Rosewood hardly competes with major global hotel chains."

DEVELOPMENT CONTROVERSY Recently, New World was embroiled in a controversy in a rural area of Hong Kong's New Territories, which exposed a cozy relationship between the government, rural landlords and local developers. The government is investigating allegations that a consultancy employed by the government and New World for separate projects wrongly provided data gathered during the government project to New World.

In an attempt to distance New World from the matter, Henry Cheng said in September that his company was a victim, stressing that the group had failed in multiple attempts to have the site rezoned for luxury houses, while the government had taken about 40% for public housing.

New World remains one of Hong Kong's major developers, with a market capitalization of $11.7 billion -- about half the level of Henderson Land and a quarter of Sun Hung Kai Properties. A strong project pipeline has buoyed the company's stock price recently, although sales of mainland assets could not check a decline in its net profit, which plunged 55% for the year ended in June. 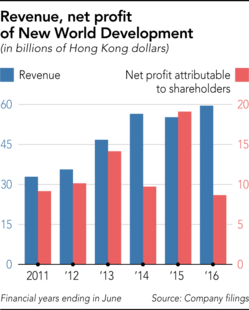 In December, the developer offloaded assets worth 34 billion yuan ($5.05 billion) in two deals with Guangzhou-based developer Evergrande, arousing fears that it would withdraw from the mainland. New World assured investors that the move was intended to shift its focus to gateway cities such as Beijing and Shanghai, by shedding assets in lower-tier cities that are plagued by supply gluts.

Chow Tai Fook Jewellery's shares have dropped 57% since the elder Cheng retired in 2012, falling far below the level at its initial public offering in 2011. The jeweler's heavy reliance on the mainland is mostly to blame. With a network of 2,300 retail outlets, of which more than 90% are in China, it has struggled as the country's economic slowdown and austerity measures stifle ostentatious spending. 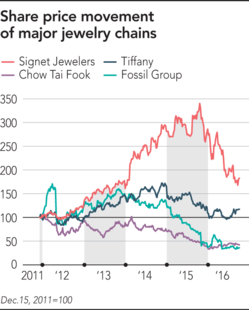 Net profit for the year ended in March plunged 46% -- the steepest drop since the company's listing -- and its revenue decline widened in the July-September quarter. "Fiscal 2017 will still be a very challenging year," Managing Director Kent Wong Siu-kee said in July, adding the group would be selective in mainland expansion and shut some stores in Hong Kong and Macau, where fewer wealthy Chinese are visiting.

LEGACYPROJECT Henry Cheng dismissed worries that his father's death would deal a further blow to stock prices, noting that the patriarch had been confined to his sick bed after brain surgery in 2012.

Analysts at Macquarie and Credit Suisse in Hong Kong agreed that Cheng's death would have a minimal impact on the family businesses, including New World, reiterating their "outperform" ratings for the developer. Last year, the elder Cheng's personal stakes in six listed companies, valued at $400 million, were transferred to a family vehicle, Chow Tai Fook Holding, in a move widely seen by analysts as an attempt to iron out succession matters.

"Henry is not the [same] kind of entrepreneur as his father," said Alfred Lau, a Hong Kong-based property analyst at Bank of Communications International. But Lau said the developer is set to receive a boost from a legacy project.

Situated on Hong Kong's harbor front, the New World Centre is being redeveloped into a 60-story complex with a mall, hotel, offices and serviced apartments in the bustling tourist hub of Tsim Sha Tsui. Calling the leasing of the skyscraper a "key upcoming catalyst," Deutsche Bank said it expects the group's rental revenue to double.

The project is scheduled for completion next year, but its key progenitor will not be there to see it. It was the savvy Cheng Yu-tung who got it approved by the government before building height restrictions were rolled out in the territory.

Even with the founding father gone, it appears the business empire he created will hold together, at least in the short term. However, the days when mainland Chinese consumers would spend lavishly at his jewelry outlets seem to be over, and the family's real estate business is facing intensifying competition. It is now up to Henry and the younger Chengs to find a new formula for long-term growth.