Carlos Ghosn goes for glory with tie-up in Southeast Asia 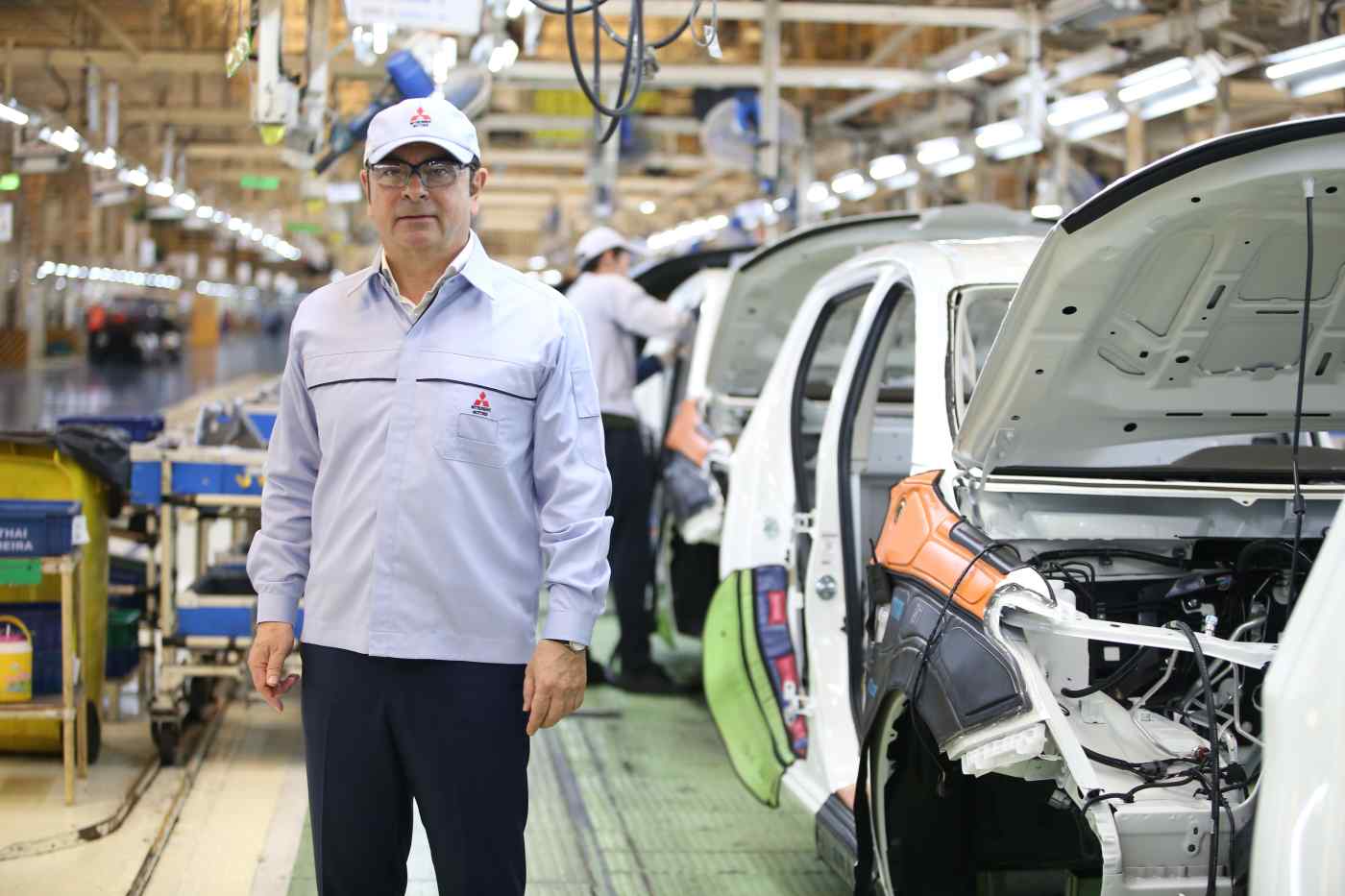 BANGKOK Carlos Ghosn knows what his automobile empire is missing, and he is on a mission to get it.

The elusive piece of the puzzle is a larger slice of the Southeast Asian market. In Ghosn's nearly 20 years at the helm, the Renault-Nissan Alliance has not built much of a presence in the region. But with Mitsubishi Motors having joined the alliance as a strategic partner last October, the chairman sees a prime opportunity to change that.

Success might well elevate the alliance to the top of the global auto industry as a whole.

The factory of Mitsubishi Motors (Thailand), or MMTh, was abuzz with nervous excitement on the morning of April 26. Ghosn stands in front of a banner emblazoned with Mitsubishi's three-diamond logo. (Photo by Yukako Ono)

The subsidiary is located in Chonburi Province, southeast of Bangkok. In the lobby, an old Mitsubishi convertible that once carried Princess Maha Chakri Sirindhorn -- one of Thailand's most popular royals -- is displayed. That morning, employees gathered outside the building and held up a huge banner emblazoned with the words "Welcome Mr. Carlos Ghosn," along with his photo and Mitsubishi's three-diamond logo. The workers had rehearsed their greeting several times since the previous week to get it just right. Ghosn became chairman of Mitsubishi Motors last December, not long after the company accepted a 237 billion yen ($2.10 billion) capital injection from Nissan Motor. The Thai production site was the first operating plant to receive an inspection by the new boss. He had just flown in from Jakarta, where the previous day he attended the inauguration of a new Mitsubishi factory, which has an annual output capacity of 160,000 units.

MAN WITH A MESSAGE When Ghosn arrived aboard a white Mitsubishi Pajero Sport SUV -- the plant's mainstay model -- the workers applauded. After putting on a work uniform, he set about examining the production lines. Mitsubishi's strategy now centers on Asia, and MMTh is the tip of the spear. It is the largest of the company's plants, with an annual production capacity of 424,000 vehicles, more than 80% of which are exported. This means the plant produces roughly one out of every three Mitsubishi cars.

Granted, Mitsubishi only sells around 1 million vehicles worldwide per year -- a fifth of Nissan's global total and a third of Renault's. But in Asia and Oceania excluding Japan and China, Mitsubishi and Nissan are equally matched. In the April-December period, Mitsubishi's sales in the region reached 228,000 units, just shy of Nissan's 253,000.

One problem is that MMTh is operating at only 84% of capacity, partly due to a slumping Thai auto market. "We should not waste one single [unit of] capacity," Ghosn told an MMTh official who was accompanying him on the tour. 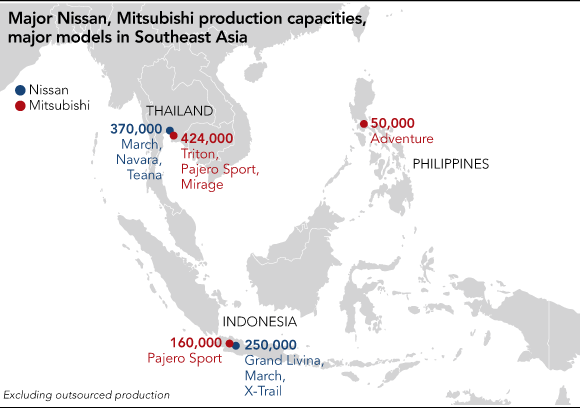 After the plant tour, Ghosn attended a town hall-style meeting with about 180 MMTh workers. Asked about his impressions of the plant, the chairman said: "It's obvious the factory plays a large and important role in Mitsubishi. Congratulations, you are at the forefront of Mitsubishi."

But he continued, "You now have a new benchmark -- the alliance level, which is obviously more demanding than the Mitsubishi level."

Another employee asked Ghosn what he regards as Mitsubishi's core strengths. He replied, "I think it is the reputation of the brand in Southeast Asia, of robustness and reliability. Mitsubishi is doing a reasonably good job in Southeast Asia but ... in my opinion, you can do a great job."

The message, in short, was to be more ambitious. Just how ambitious? Enough, perhaps, to help the alliance truly rival Volkswagen, Toyota Motor and General Motors for the global throne.

IN TOYOTA'S DUST Toyota is No. 1 in the region. In Indonesia, the biggest Southeast Asian market, Toyota controls a 35% share with its own brand and more than 50% when small-car subsidiary Daihatsu Motor is factored in.

Toyota also has a wide lead in Thailand, the region's second-largest market, with a share above 30%. Nissan has only a small presence, at around 6%.

Nissan has not neglected Southeast Asia -- it entered Thailand in the 1950s. But it prioritized the U.S., European and Chinese markets, and its crisis in the 1990s forced it to be selective about investments.

Southeast Asian expansion is enshrined in the company's much-hyped management plans. The "Nissan Power 88" six-year blueprint, announced in 2011, included an ambitious target of boosting market share in five major Southeast Asian countries to 15%, from 6% at that time.

Under the plan, Nissan opened a new Indonesian plant in 2014 and released small cars under the Datsun marque, which was revived for emerging markets. The same year, it opened a plant for its Navara pickup truck in Thailand.

The results, so far, have been disappointing. 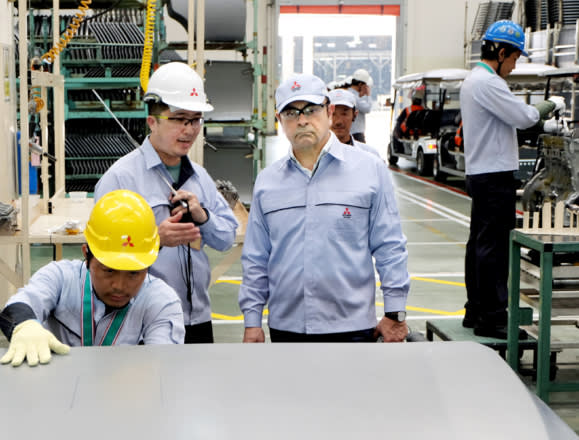 When Nissan started the Datsun business in May 2014, Hiroto Saikawa, who held the title of chief competitive officer at the time, visited Jakarta and said, "We are confident that we can satisfy consumers in Indonesia."

But Nissan's market share in Indonesia has not increased. In fact, for the fiscal year that ended in March this year -- the last "Power 88" year -- Nissan's slice of the Southeast Asian market presumably remained at about 5%.

This is something Saikawa will be keen to rectify, having taken over as Nissan's president in April; Ghosn remains chairman.

BRIGHT SPOT One could argue that Mitsubishi has Southeast Asia to thank for its survival.

In Japan, the marque has been tarnished by a series of scandals. Twice, since 2000, attempts to cover up defects have led to belated, massive recalls.

In the U.S. and Europe, tough competition has taken a toll over the years.

Mitsubishi tried to rebuild under the wing of the old DaimlerChrysler, but the plan was abandoned in 2005. The automaker ended production in Australia in 2008, Europe in 2012 and the U.S. in 2015. Instead, it accelerated expansion in Southeast Asia. Mitsubishi opened a third plant at the MMTh site in 2012 to produce the Mirage subcompact. It started operating a plant in the Philippines in 2015 that it had acquired from Ford Motor. It had a 9% market share in Indonesia and 7% in Thailand in 2016 -- beating Nissan in both countries, according to research company MarkLines.

A factor behind Mitsubishi Motors' brisk performance in Southeast Asia is Japanese general trading houses. In Indonesia as well as Myanmar and Cambodia, whose automobile markets have high growth potential, Mitsubishi Corp. is a sales partner. In the Philippines, where the car market has continued a double-digit expansion for more than three years, Sojitz offers support. Only in Thailand does Mitsubishi Motors manage the whole value chain on its own.

For the nine months through last December, Mitsubishi incurred an operating loss of 23.2 billion yen, due to the yen's appreciation and costs stemming from yet another scandal in Japan -- this one over fraudulent fuel efficiency tests. Its Asian operations excluding Japan and China, however, generated 33.2 billion yen in profit -- a testament to the region's importance. For comparison, Nissan logged an operating profit of 53.3 billion yen in Asia during the same nine-month period. The gap was much narrower than it should have been, given that Nissan posts six times more group sales than Mitsubishi.

Toyota booked an operating profit of almost 350 billion yen from its Asian operations.

Ghosn is anything but satisfied. "We should be on the podium in each market," he told the Nikkei Asian Review in an interview, "but we are still far from that."

UNTAPPED POTENTIAL Having delegated Nissan's day-to-day operations to Saikawa, Ghosn now focuses on the big picture for the alliance. Analysts reckon he envisions Nissan and Mitsubishi capturing around 20% of the Southeast Asian market.

The inspection of MMTh was a first step toward making it happen. After the factory tour, Ghosn talked about how Mitsubishi should aim higher as part of the alliance -- and how both sides can benefit.

"This plant is very productive," he said. "It is [achieving] good results. But frankly, the potential in this plant is much bigger."

Ghosn is expected to pursue a wide range of synergies. In Thailand, Nissan and Mitsubishi have already unified their logistics for the transportation of finished vehicles from plants to dealerships. Up next are procurement reforms, with plans to cut manufacturing costs through parts standardization.

"If you see someone else doing it, you can compare part by part, engine by engine and then say, 'Oh my God, I am still shipping my engines from somewhere [else] when Mitsubishi is localizing them,'" Ghosn said. Nissan and Mitsubishi -- and even Renault -- could eventually standardize not just parts but car platforms. By unifying the basic structures of their vehicles, the automakers would be able to share the development burden.

Given that Renault is virtually absent from Southeast Asia, Ghosn hinted at the possibility of Mitsubishi producing vehicles developed by the French company. These cars would then be sold in the region with the three-diamond logo.

Consolidating procurement and logistics creates short-term synergies that should "hit the bottom line in 2017," Ghosn said. Cross-manufacturing and changes in platforms, meanwhile, are expected to happen in two to three years. "You will be disappointed if I don't do it quickly," he added.

Ghosn is not going to settle for a 1 million car contribution from Mitsubishi.

"As head of the alliance, I need to make sure that each company has a good track record and is moving in the right direction," he said. "I want to be sure that the alliance is being used in order to reinforce the bottom line of each company."

Referring to Mitsubishi President and CEO Osamu Masuko, Ghosn continued, "So I challenge Masuko-san, I challenge, since April 1, Saikawa-san, and I challenge myself as CEO of Renault [to ensure] we are providing enough synergies between ourselves."

Mitsubishi workers, at least those in Thailand, welcome their new boss. "He was very clear on what he wants from us and went straight to the point," one employee said after Ghosn's factory visit. "I think he is very Western, something that I have not seen in Mitsubishi before." Ghosn and MMTh workers show their team spirit at the end of a 20-minute town hall meeting. (Courtesy of Mitsubishi Motors (Thailand))

At the end of the 20-minute town hall session at MMTh, Ghosn shouted, "Mitsubishi!" In response, the workers stood and called out "Su! Su!" -- which means "fight" or "give it your all" in Thai.

Meeting Ghosn's lofty expectations, of course, will require Mitsubishi to shed its old habits and adapt to the ways of Nissan and Renault.