Cashing in on artificial intelligence TOKYO   Japanese companies are increasingly integrating artificial intelligence into their products and operations for a range of purposes -- from spotting human errors to passing on expertise to future generations -- and in various business fields, such as manufacturing, medical, transportation and education.

AI refers to computer software that is capable of exhibiting human-like intelligence. It can interpret the meaning of data and find optimal solutions to a variety of tasks. A common commercial application of the technology is at call centers. The operator who receives the phone call inputs information into the computer, which analyzes it to find the best answer to the inquiry from manuals and past responses.

Recently, things have become a bit more complicated. Renesas Electronics, a major Japanese semiconductor maker, is trying to pass on its technological expertise by teaching computers the "masterly skills" of its employees.

"In the past, deep experience was needed. But after analyzing large amounts of data, we are now able to find defective products more accurately," said Satoshi Takakura, an expert in Renesas' industry network solution department.

Normally, experienced workers apply a special gas to the wafer, making adjustments based on the voltage, temperature and gas density, among other factors. Finding the right balance among these various indicators requires a knack, and this is where the workers' skills are crucial.

To discover the unwritten formula, Takakura and his colleagues fed into the computer data containing voltage information derived from etching thousands of silicon wafers. During the 40-second etching process, the computer monitors the constantly changing surface conditions of the wafer by checking voltage every 50 milliseconds, a rate impossibly fast for humans, and recognizes defects in the wafers.

The applications of AI to manufacturing are only beginning to reveal themselves. Few factories have actually adopted the technology so far. But information technology companies are eager to develop AI-based services to boost productivity at plants on expectations that demand will soon grow.

At a trade fair in Tokyo in early December, Japanese electronics company Hitachi, introduced an AI-based warning system that can monitor workers and spot procedural errors. At Hitachi's exhibition booth, two piles of machine parts were on display. When a demonstrator picked up the wrong item, an alarm immediately reddened.

The embedded AI learns the correct procedures as visual images of human movements and studies the resulting patterns. "AI can find truth hidden in data and translate it into innovation," said Hitachi Executive Vice President Yutaka Saito. Hitachi hopes to diversify the technology into various fields.

Fujitsu, another electronics major, is developing a similar AI-based problem-detection system. The system learns normal machinery status at factories or plants based on data gathered by tens of thousands of sensors. If the current condition differs in any respect compared to the learned status, such as a nonstandard noise level or a warped surface, it gives warnings to avoid sudden shutdowns of the production line.

DATA FLOOD   The amount of data generated around the world has been skyrocketing in recent years. By one estimate, the total could reach 44 zettabytes -- "zetta" means a trillion times a billion -- in 2020, 10 times the amount in 2013. This is partly due to the increasing number of industrial machines being connected online. More and more companies are embracing the idea of the "Internet of Things," thanks to plummeting prices of sensors and technological improvements.

"Big data," however, is useful only when there are effective means to use it. Data analysis has long been driven by human experience, in which people set different conditions and variables based on their knowledge. AI, on the other hand, is capable of processing large amounts of data quickly and finding relations among sets of data. Companies are rushing to develop technologies incorporating such autonomous learning technology. As analytical technology advances with AI, the Internet of Things may spread further at factories. 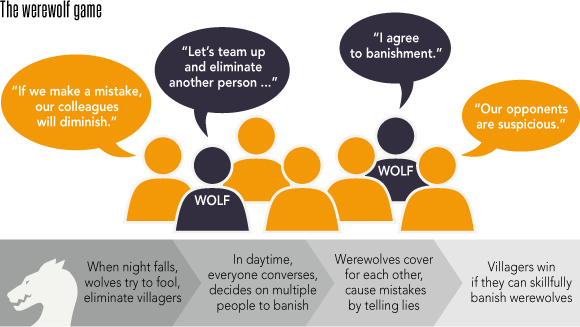 "Can AI tell a lie and win a person's trust?" An event tackling this complex question was held at Yokohama's international convention center in August 2015.

In a conversation-style game called "Jinro" ("Werewolf"), participants competed on AI functions. In the game, the key is back-and-forth interchange among villagers and wolves dressed as villagers. Taking clues from their conversations, villagers try to discover who the wolves are and banish them. Conversely, the wolves try to win the hearts of villagers through lies and get someone else banished. Because there is no guarantee of victory and the state of the game changes at a hectic pace, advanced algorithms are necessary. At the event, 38 different types of AI competed for the highest victory ratio while going through more than 5 million contests.

Until now, progress in AI has been measured by games such as chess or shogi, but research is progressing beyond them. That is because they are what are known as "complete information games," meaning that information such as the rules and moves are all public knowledge.

Fujio Toriumi, an associate professor at the University of Tokyo's Graduate School of Engineering who has worked on AI research using Jinro since 2013, said, "Jinro is known as a game in which people fool one another, but it is really a game of winning trust. We want to see how AI can build relationships of trust with people."

Kibiro is a communication robot whose developer intends to begin retail sales during 2016. The tiny device is small enough to fit in the palm of the hand. Kibiro's signature feature is its ability to organize enormous quantities of information, identify what is valuable for the user and "trash" what isn't needed.

Based on research into personal robots, big data analysis company UBIC uses AI cultivated on analysis of legal texts. This technology sifts through information and finds a "correct interpretation" or "subtleties" for a specific user by referencing past speech and behavior such as Twitter posts and Facebook histories. Kibiro is a robot that uses artificial intelligence to carry on conversations.

"The day is coming when it will no longer be necessary to search a website," said Takumi Saito, president of Kibiro vendor Rappa. "Kibiro can guess even preferences about which the user is not consciously aware." The plan is to create another "self" that can judge information in place of one's own self when conversing with robots. That form will dovetail with the ultimate "copy" that transcends one's self. Kibiro's price is projected to be on a par with smartphones, at less than 100,000 yen ($852).

THE SINGULARITY APPROACH   In 2045, experts believe we will reach a "singularity," in which AI capabilities will exceed those of humans. The music club event "2045," held at irregular intervals in Tokyo, asks participants whether it is possible for AI that has learned music to move people emotionally.

At the event, special AI selects songs in place of a DJ. It analyzes how the audience is gathering and reacting, and creates a flow of tunes from 12 indicators that fuses electronic instruments and vocals based on enormous amounts of past performance data.

How well can AI understand people when the amplitude of the human emotion of "play" is large? Tackling that challenge will determine the road AI traverses as it progresses.

Here's another example: Ever thought about what kind of cat or dog your face resembles? Just stand in front of an AI-linked camera, and you can get a result in seconds. 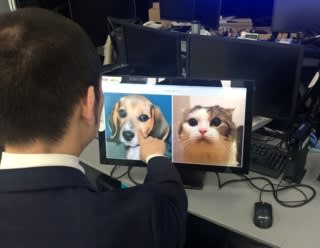 Anicom has big plans for its image analysis system, which now likens human facial features to specific breeds of cats and dogs.

Anicom Holdings, Japan's leading pet insurer, has set up a team to work on advanced image analysis based on deep machine learning, a kind of AI. Mimicking the signal processing of the human brain's neural network, the technology uses a computer to identify specific representations from a vast amount of data.

The insurer is now using the technology to promote its potential and help customers be more familiar with animals. Those who participate get a card imprinted with the image of their pet selves.

Eventually, Anicom aims to use the technology to help prevent unhealthy pets from getting sick. It is trying to develop a device capable of reading the faces of cats and dogs in the most minute of detail, then use the readings to identify the early stages of sickness. The service Anicom hopes to provide would warn pet owners before their pets show noticeable symptoms and have to go to a pet hospital.

The face is not the only target. Anicom is also studying the possibility of diagnosing bowel diseases by examining images of a pet's excrement. "Once we define the link between images and diseases for animals, we want to apply the method to humans," said Meiji Maruo, who oversees the company's planning section. Other businesses have ideas about how to take advantage of the coming AI revolution. A real-estate brokerage is leveraging deep learning to judge the best time to buy or sell property. Tokyo-based Itandi, founded in 2012, analyzes condominium sales information. It cross-checks as many as 60 measurements, from room layout and floor size to macroeconomic and other data, including interest rates, land prices and stock prices.

Based on the analysis, Itandi estimates Tokyo area property prices, then lists "good buys." It began delivering its lists to real estate investors in summer 2015.

According to Yuya Fujiwara, head of Itandi's AI Technology Lab, the method has demonstrated its predictions to be more accurate than those made by certified real-estate appraisers.

Itandi's method can also immediately calculate returns from buying a home, renting it out, and then selling it in 10 years. The brokerage plans to expand its coverage to Osaka and other cities this year.