Catching flame -- LeEco to keep its expansion bonfire under control

HONG KONG -- Chinese billionaire Jia Yueting, founder of LeEco, has long modeled himself as a technology titan along the lines of Steve Jobs, Elon Musk and other modern-day entrepreneurs.

Started off as a video streaming company 12 years ago, the company has expanded quickly -- some say too quickly -- into far-ranging sectors, including entertainment content production, smart devices, electric cars, internet finance, cloud computing, virtual reality technology and real estate. The company also has ventured beyond Chinese shores, most notably into the U.S., India and Russia.

That lightning growth is now the cause of the company's woes. LeEco is struggling from overexpansion, mountains of debt and production incapacity. In an extraordinary 5,000-plus-word letter to employees dated Nov. 6, Jia wrote: "As we blindly sped ahead and burned money for aggrandizement, our global ambition somehow got overstretched."

The 43-year old Jia, who is cutting his annual salary to a token 1 yuan, wrote that LeEco is suffering its most challenging period yet. The company is strapped for cash and has struggled to pay at least some of its suppliers.

"We have achieved unprecedented sales," Jia noted, referring to the company's smartphone Le Pro 3 that launched in the U.S. in September. "But our supply chain has failed to support its growth," he said. "Such pressure has been mounting over the past few months, as LeEco's funding problems persist."

The release of the Nov. 6 letter came two days before the collapse of LeEco's restructuring plan of its Shenzhen-listed arm, Leshi Internet Information & Technology. LeEco suspended plans to integrate Le Vision Pictures, a Chinese film production affiliate that it acquired in May for 9.8 billion yuan ($1.42 billion). That figure represented 1.5 times the net asset value of Leshi at the end of 2015. The transaction was to be financed mainly by a rights issue to 44 investors, including celebrated director Zhang Yimou and actor Huang Xiaoming.

Leshi blamed the botched deal on "the downturn in China's film industry." The recent spate of news has sparked a selloff in Leshi's shares. They have lost 4.53% to 37.91 yuan on Nov. 18 since the release of Jia's letter, and shed 35.54% for the year. Despite the drop, they are still trading at more than a hundred times to its 12-month forward earnings. LeEco's affiliate Coolpad Group, a leading smartphone vendor in China and India, has seen its Hong Kong-listed shares tumble to a three-year low. It closed 17.56% lower on Nov. 7 and declined by 34.04% to1.02 Hong Kong dollar (13 cents) for the year. Coolpad tapped Jia as its chairman in August, when LeEco increased its stake in Coolpad to 28.9% through a vehicle called Leview Mobile HK.

Credit Suisse said in a Nov. 7 report that earnings of the six Chinese suppliers to mainland electronics manufacturers it covered will see "very limited" impact. But it highlighted that Coolpad, the only one it rated "underperform," is most exposed to LeEco's fallout as it has a 1.2 billion yuan deal to supply handsets to LeEco's e-commerce arm, the operator of Lemall.com.

Coolpad announced on Friday night that its net loss is expected to be approximately 3 billion Hong Kong dollars ($387 million) for the year, compared with a HK$2.325 billion profit last year. The company disclosed that its sales through October had fallen by 43% compared with a year ago, blaming a "downturn and fierce competition in the domestic smartphone market." Its inability to introduce more than one model and to focus on "inventory clearance"has added to its woes. "LeEco is developing too fast in too many directions. It doesn't have a core business as strong as BAT's to fuel its expansion," said Lin Zhu, an analyst at Shanghai-based research firm Red Pulse, referring to the three major Chinese tech conglomerates of Baidu, Alibaba Group Holding and Tencent Holdings. "Some industries it has waded into require a large amount of research and development investment, but with little prospect of turning profits in a short period of time," Lin said.

Le Holdings' net loss last year widened to 174.49 million yuan from 17.53 million yuan a year earlier, according to a May filing by Leshi.

"I'm not at all shocked that the company has hit financial and operational difficulties, as it has long been my opinion that LeEco was expanding too quickly into too many new business segments at once," Mark Natkin, managing director at Marbridge Consulting, a Beijing-based advisory on China's telecommunications and technology sectors, told the Nikkei Asian Review.

LeEco, hoping to become an all-in-one Chinese version of Netflix, Apple and Tesla, has spent at least $6 billion in acquisitions over the past two years, with the $2 billion takeover of U.S. budget-TV maker Vizio in July the biggest deal so far, according to data from Dealogic.

The $6 billion does not include the high cost of sports broadcasting rights incurred by its affiliate LeSports, which is 10.34% owned by Leshi, the listed arm. LeSports, whose investors include conglomerates HNA Group, Dalian Wanda and Alibaba, was valued at $3.3 billion in March. These programs are often bundled into the smart devices that LeEco promotes at low prices. Jia explained in his letter that "subsidizing users" is a strategy to scale up its customer base as the consumer tech market cycle becomes tighter. LeEco has sold 17 million smartphones since launching the first model last year, taking 5% of the mainland market as of the third quarter of 2016, according to technology market tracker IDC.

But analysts see little prudence in such tactics.

"That strategy only works if your ecosystem and product portfolio is attractive enough to retain the user base past one product cycle," said Alberto Moel, senior research analyst at Bernstein Research. "Otherwise you're just burning cash in acquisition costs that cannot be monetized."

Perhaps LeEco's most controversial undertaking has been its foray into electric cars, whose investment has already topped 10 billion yuan. In China, LeEco is developing its own model, the LeSee, at a $1.8 billion factory near the eastern Chinese city of Hangzhou. It is part of a project called "Eco Experience Park," which also accommodates a theme park and amenities for internet-connected cars and offices.

Faraday Future's spokesperson told the Nikkei Asian Review, "Our diverse financial structure allows us to maintain our mission," adding that the two-year-old startup is "fully committed" to launching its first connected vehicle in 2017. 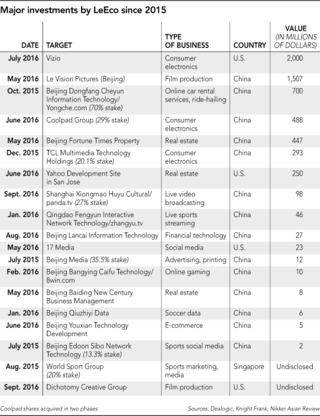 LeEco's problems has drawn attention from the U.S. state of Nevada, as the state government has planned a $175 million bond issue to finance infrastructure that supports the North Las Vegas plant.

"The bonds have not been issued, and the issue date has been postponed from September 2016 to September 2017," Dan Schwartz, Nevada's state treasurer, told the Nikkei Asian Review. "We have emails from former employees [of Faraday Future] which state that there is, indeed, a cash shortfall," he said. "We also have in our possession a letter which states that Faraday Future owes $55 million to AECOM. As of November 1, our sources indicate the money has not been paid."

Jia has been funding his projects by pledging Leshi's assets against loans. Over 83.63% of the 683 million shares he holds, representing a 34.46% stake, was collateralized, according to Leshi's report for the quarter ended in September.

He also took Singapore-listed Sinotel Technologies, the wireless telecommunications firm he founded in 2002, private in February because public shares outstanding had fallen below the required 10%.

Jia acknowledged in the Nov 6. letter that LeEco's approach to fundraising "lacks diversity," which led to a rather "ill-suited capital structure." It has been basically relying on Jia personally or on borrowing. The disclosed term loans under his name in 2015 were 2.07 billion yuan. In the same year, Leshi issued two three-year bond issues amounting to 1.93 billion yuan at coupon rates of 7.5% to 8.5%, according to the company's annual report.

LeEco's troubles have spread elsewhere. In September, four months after entering the Russian market and pledging investments totaling $100 million, it said that it will freeze indefinitely an online cinema project.

"LeEco does not have plans of recapitalization or asset disposal. Overall, LeEco's finance is healthy," LeEco's spokeswoman told the Nikkei Asian Review. "LeEco will focus more on profit-making and slow down its market expansion."

The group said on Nov. 16 that it is halting its plan of expanding into Singapore, Thailand and Indonesia, but will continue to focus on China, Hong Kong, the U.S. and Russia.

The company, which Jia has said was getting "bloated," said on Nov. 14 that it will be more rigorous in cutting employees who underperform, mainly the bottom 8% to 10%.

The company's 13,000 employees include an additional 5,000 staff members over the past year, poaching talent from Huawei Technologies, Qualcomm, Samsung Electronics, Morgan Stanley, Paramount and other companies to run its overseas headquarters in Silicon Valley, which was set up in April.

Jia's plans to restore health to the company appear to have gained traction among his stalwarts. About 10 senior management members at Leshi said a few days after the release of the letter that they would spend a total of 300 million yuan from their own pocket to increase their stakes in the listed company over the next six months, according to a filing to the Shenzhen Stock Exchange. The investment comes despite the company's return on common equity declining to 16.2% in 2015 from 30% in 2008 - two years before it went public.

Although its net profit for the July-September quarter grew 71% from a year earlier to 208.6 million yuan, its total debt now stands at 18.9 billion yuan, equivalent to 65.7% of total assets. The company acknowledged the ratio is "relatively high," and listed it as an important risk factor. According to the quarterly financial statement, the high debt ratio added to difficulties in fund management, increased interest payments and thus "bring about certain risk of debt repayment."

Hong Kong media reported on Nov. 15 that Jia's classmates from the Cheung Kong Graduate School of Business in Beijing, founded by Hong Kong tycoon Li Ka-shing, had pledged a combined investment of $600 million in LeEco. Possibly in connection to the pledge, Hong Kong-listed sofa maker Man Wah Holdings said in a filing to the stock exchange the following day that Wong Man Li, one of the classmates and the company's chairman, "is considering an investment in LeEco in a personal capacity."

Meanwhile, LeEco will have to deal with its supply chain constraints.

One of the mainland component suppliers, AAC Technologies, publicly admitted on Friday that it will not start on a new project until LeEco has settled its bills. Managing Director Richard Mok told reporters in Hong Kong that a "payment extension of three to six months is not an issue but we have to know the bigger impact on us first." He also added that a two- to three-year payment period would be unacceptable, and stressed "we cannot rule out legal action if it takes too long."

The supplier for smartphone parts had not made provisions for the uncollected bills yet, but Mok stressed that its existing projects with LeEco in 2016 was "over."

"LeEco has been a successful company until now," said Antonio Wang, IDC's associate vice president. "Now it needs to rethink its strategy, and focus more."