Cathay Pacific shuffles brass after first loss in a decade

HONG KONG -- Cathay Pacific Airways chief executive Ivan Chu Kwok-leung is stepping down, the company said on Wednesday. The announcement comes less than a month after the Hong Kong carrier recorded its first annual loss since the global financial crisis of 2008.

Chu, 55, who has been in the position since March 2014, will be replaced by the airline's current chief operating officer, Rupert Hogg, a 30-year industry veteran at parent Swire Pacific. The switch will take effect on May 1.

Chu will be reassigned as chairman of John Swire & Sons in China, while Hogg, 55, will also become chairman of sister carrier Cathay Dragon. After these and other personnel changes, Cathay Pacific will no longer have a chief operating officer, according to a stock exchange filing submitted following the market's close on Wednesday. 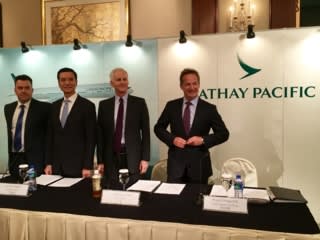 "This is a move that will surprise few," one Hong Kong-based aviation analyst said of the personnel reshuffle. "But I am not sure if that will be a quick panacea to Cathay's deeper structural woes. I'd say good luck to the new chief."

The change of brass follows Cathay's announcement in January of a three-year plan, including job cuts, to overhaul its struggling business. The restructuring drive marks the most significant shake-up at the carrier in two decades.

On March 15, Cathay reported a net loss of 545 million Hong Kong dollars ($70.1 million) for last year. This was only its third annual loss in 70 years of operation.

Citing the need for a "leaner" structure, the airline said earlier that the changes would "start at the top" and take effect by midyear. It aims to reduce unit costs, excluding fuel, by 2-3% in the next three years -- without trimming capacity.

On the contrary, with the addition of nonstop routes and more front-line staff, it looks to boost passenger capacity by up to 5% annually until 2024.

Cathay has been struggling with intense competition in recent years. Low-cost carriers have undercut its short-haul business, while rapidly expanding state-backed players from the Gulf and China have encroached on its premium long-haul market.

Chu joined John Swire & Sons in 1984 and took on management roles, including chief operating officer at Cathay from 2011 to 2014, before Hogg succeeded him.

Hogg, who joined the Swire group in 1986, previously oversaw Cathay's cargo and marketing operations. He will receive annual compensation of HK$4.2 million, with housing benefits, after taking up the new role.

Cathay chief executives typically hold the post for about three years, as seen with Chu and predecessors Tony Tyler and John Slosar -- the current chairman at Cathay and Swire Pacific.

"The new senior management structure we have announced today is the fruit of that extensive work and we are confident that it can take Cathay Pacific to new heights," Slosar said in a statement. "I look forward to working closely with Ivan in his new role as chairman of John Swire & Sons (China)."

Describing Hogg as having an "impressive level of aviation and business experience," Slosar said the airline's new boss would "bring a commercial focus and spirit of innovation."

"He is the right man to lead our team," Slosar said.

A number of promotions and resignations will coincide with Hogg's appointment. Cathay's information technology chief, Paul Loo Kar-pui, will become chief customer and commercial officer. Yau Ying-wah will resign as Cathay's executive director after he becomes director of service delivery.

Martin Murray, Cathay's finance director since 2011 and the man who supervises the airline's fuel-hedging strategy -- which led to hefty losses -- will remain in his position with a new title of chief financial officer.