In Europe, though, Central's expansion strategy is decidedly old school. Flagship stores in Italy and Denmark are iconic, old-world throwbacks that defy practically every aspect of the company's signature malls in Asia.

The differences are intentional, said Vittorio Radice, vice chairman at Italian unit La Rinascente, who is overseeing the group's plans for a store in Rome. Central also has its eye on other leading capitals including Paris, London and, perhaps, Tokyo.

Radice, a London-based Italian whose resume includes running iconic U.K. retailers Habitat, Selfridges and Marks & Spencer, says he wants to create "cathedrals" of commerce modeled on the landmark department stores that once flourished in city centers -- before the rise of online shopping and megamalls.

"Brands go up and down in popularity," he said, noting that department stores with expansive inventories and exquisite personal service define great cities. "They are there, an essential presence."

Crucial considerations for Central, according to Radice, are having the grandest stores in the best locations in gateway cities. The company aims to eschew the copycat qualities of modern malls, while embracing and showcasing the unique flavors and heritage of every city in which it does business.

"When you come into the store, you should feel where you are. When you walk into one of our stores in Italy, what do you want? You want to feel Italy," said Radice, who was chief executive of La Rinascente before it was acquired by Central in 2011.

Radice stayed on to oversee the international development of luxury department stores, taking a place among the most senior executives at Central -- one of Thailand's oldest and most successful family-run companies.

Radice mapped out Central's aggressive plans for Europe, including possible key acquisitions in Paris and London, in a recent interview in Bangkok. "We plan to be very opportunistic," he said.

"We're looking at several places," he added, noting that Paris would be ideal, with its rich history and architecturally stunning historic department stores. "I'd also love to have a store in London -- I make my home there," said the 57-year-old son of a furniture retailer from Italy's Lake Como area.

Central is scouting the globe. "There are probably 50 cities around the world as big as countries," Radice said. "Look at Tokyo. There are 37 million people."

The goal is to find premium properties in gateway cities, where cashed-up Central can acquire distressed downtown emporiums, as it did in Italy and Copenhagen. "Cities that attract a lot of visitors, that are tourist destinations," he said, emphasizing that the group would refurbish historic landmarks into must-visit shopping meccas. 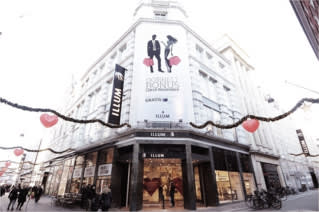 Central Group bought the Illum department store in Copenhagen in 2013.

Radice's vision for Europe contrasts not only with recent Central openings in Vietnam and Indonesia, but also with the group's stores across Thailand, whether megamalls or luxury brand showcases like Bangkok's new Central Embassy, where he sat for the interview. One could say that Central's global perspective is a tribute to its origins: It was founded as a Bangkok retailer in 1927 by Tiang Chirathivat, a poor immigrant from China's Hainan Island.

The company has been family-run in true dynastic style throughout its history. Since 2013, the chief executive has been Tos Chirathivat, a grandson of the founder. As part of a new wave of third-generation executives, he took over a company that was still expanding rapidly throughout Thailand, but knew that to sustain double-digit growth, overseas expansion would be necessary. "Growing both internationally and regionally is critical for this company," Tos said in an interview last year.

Tos spent over a decade as chief executive of Central's retail development division, during which time the company first ventured abroad -- opening three department stores in China in 2010 and 2011. The results there have been disappointing, he conceded in the interview, noting that further expansion in China had been put on hold.

Instead, he has turned his attention to high-growth areas in Southeast Asia. The group launched the first two of its new Robins stores last year in Hanoi and Ho Chi Minh City. A Central department store opened at the Grand Indonesia mall in Jakarta last November. Tos said Central would open in Malaysia in 2016 or 2017.

Over the next 15 years, Central Group plans to spend nearly $4 billion to finance about 30 malls in Vietnam, Indonesia and Malaysia. Other regional locations, including Myanmar, are under review, Tos added.

Tos admitted that the company made some mistakes in China. It plunged into the saturated retail market too late, after all the best locations had been taken. One lesson learned was the need to secure good partners. "But things move super-fast in China these days, and building those relationships takes time," he said.

"China has been very difficult, and not just for us, for everyone in our industry," he added. Recent campaigns by the Communist Party leadership against ostentatious luxury spending, especially by officials, have also hurt. "There's just too much oversupply. Over the last five years or so, everyone overbuilt."

The jury is still out on Central's strategy for Europe, where it bought the Illum department store in Copenhagen in 2013, and spent an estimated $370 million to acquire La Rinascente, a household name in Italy, where it launched in 1865.

La Rinascente was struggling for survival in 2005, when a consortium of private equity and real estate funds provided a lifeline; Radice came aboard to oversee restructuring. The plan from the start, Radice said, was to close smaller stores and gear up for new ownership. "We had to look at stores that made sense." Basically, any property that was not in the city center, and dominant in the market, was shuttered.

Many in the industry questioned the Thai-Italian synergy of Central's acquisition, but Radice praised the fit. "They are a family that has been in this business a long time, with a great history," he said. "They will keep this for generations."

Central's deep pockets have been welcome. Already, 50 million euros ($56.4 million) has been committed to the five-year refurbishment of the stately 19th century store in Copenhagen. Central officials said they intend to spend 200 million euros on sprucing up existing stores in Italy, and on landmark new locations in Venice and Rome.

Radice conceded that the costs will not quickly be recouped but noted the company is taking a long-term view. Central is almost entirely privately held -- with the exception of two listed arms, property development and management unit Central Pattana and Central Plaza Hotel -- and the group does not disclose exact figures. However, Radice said revenue in Italy had grown by 5% annually, even with the reduction of stores. "Profits have grown even more," he said.

Radice rejected what most accept as conventional retail wisdom, disparaging any suggestion of online outreach. "If you want to buy a product, you go online. If you want an experience, you go to a store." In the cutthroat world of retail, he declared: "We will win the war by building experiences. We will lose the war by just trying to sell products."

Yet he also acknowledged that adaptability is essential. "What you're selling today is not necessarily what you are going to be selling tomorrow. Change is crucial."

Radice espoused a formula that blends tradition with modernization. The Rome store, which he said would open in 2017, is in a prime downtown location. A group of old houses are being rebuilt into a department store, with the design emphasizing the city's thousands of years of history.

During renovations, workers uncovered a 2,000-year-old Roman aqueduct, which has been carefully preserved in the basement. It will be offset by old Roman baths, salvaged from another location and moved to the site. "We put glass in front, so shoppers can admire this as they visit the store," he said. "They can see something you can never see anywhere else."

This is all part of his vision for a classic department store experience with contemporary convenience. Shoppers might look for socks, he suggested, then sip an espresso on the rooftop, overlooking the cathedral in the heart of Rome -- everything will emphasize the Italian flavor.

"Maybe we will build a religious shop in the store -- the first in the world!" he said. "This wouldn't make sense in Copenhagen or anywhere else. But here, you could buy souvenirs, images and postcards of the Pope."

At 12,000 sq. meters, the store is set to become a new landmark for Rome. Pointing out the window of Central Embassy's executive lounge, where the company's flagship Chidlom department store could be seen, Radice chuckled. "That's 60,000 sq. meters."

The sizes and strategies may contrast, but Radice said the Thai and Italian sides of this internationally expanding group are perfectly synchronized. "Our philosophy is the same -- we want to build cathedrals of shopping throughout the world."