Changan Automobile executives attend a ceremony in December at its flagship Chongqing plant to celebrate sales of 3 million cars in 2016.
Business

CHONGQING -- China's Changan Automobile Group had a banner year in 2016, selling more than 3 million vehicles, the bulk of which carried its own logo.

Though the company trailed three of its domestic rivals in overall sales, it led the pack in sales of own-brand cars.

Changan is pumping a lot of money into technology in the hope of making the leap to the global elite. More than 5% of its sales go into research and development for self-driving technologies.

The company aims to have a fully self-driving car on the market by 2025. It has already developed a prototype equipped with emergency braking and other features that has 2,000km of trouble-free driving under its belt.

At a ceremony marking the 3-million-unit milestone, held on Dec. 19 at its flagship plant in Chongqing, Chairman Xu Liuping pledged to propel Changan into the big leagues by making it the leader in smart-car technology. 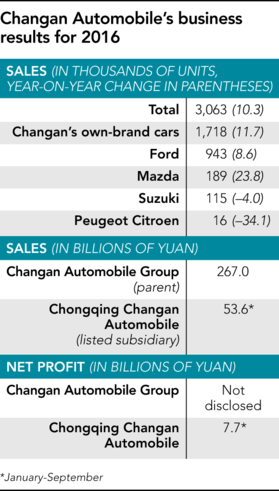 Xu praised the record performance and set a new target of 3.1 million units for 2017. He said the company's plans to roll out as many as 25 new models should put that goal within reach.

Changan traces its roots back to 1862, when it started out as a military supply factory in Shanghai. It was launched by Li Hongzhang, a leading 19th-century Chinese statesman.

After the People's Liberation Army announced in 1979 that it was repurposing military factories as civilian plants, the Shanghai facility began making cars in partnership with Japan's Suzuki Motor.

The military legacy remains, however. Changan is controlled by China South Industries Group, a maker of firearms and other weapons affiliated with the military.

Changan's strong focus on R&D is underscored by its numerous research centers -- it has facilities in Chongqing, Beijing, Shanghai and Harbin, as well as in Japan, Italy, Britain and the U.S., employing more than 7,000 engineers and researchers.

Much of that focus is on electric and other eco-friendly vehicles. By 2025, the company plans to spend 18 billion yuan ($2.61 billion) to bring 34 such cars to market and sell 2 million units.

Changan still has room to grow. It was the fourth-largest Chinese carmaker by sales in 2016, behind SAIC Motor, Dongfeng Motor and First Automobile Works (FAW) Group, but it is rapidly closing in on the No. 3 spot.

The Chinese administration of President Xi Jinping is pushing through structural reforms targeting state-run enterprises, including businesses affiliated with the military. This could provide an opportunity for Changan to revamp its corporate structure and operations, which needs to boost its efficiency and product quality to compete globally.

How those reform efforts pan out has enormous implications not just for China's auto industry but also for the nation's economic future.