HONG KONG - Soon after announcing it will buy a controlling stake in the personal computer unit of Japanese information technology company Fujitsu, Chinese smart devices maker Lenovo Group said it will continue to look for other buying opportunities -- despite a protracted depletion in its coffers.

"Acquisition is a very useful tool to realize our strategy," Lenovo Chairman and CEO Yang Yuanqing, said in a conference call on Thursday evening. "We still have targets which [are] consistent with our strategy. Definitely we'll consider that," said Yang, though noting he could not reveal more at this stage.

The Hong Kong-listed company announced on Thursday afternoon that it will acquire 51% of Fujitsu Client Computing for 17.85 billion yen ($156 million), with existing cash on its balance sheet. The final payment could be revised upward by as much as 12.75 billion yen, depending on the joint venture's business performance through March 2020.

This comes despite a sharp decline in Lenovo's cash and cash equivalents, which hit $1.26 billion as of September, down 48.5% from a year earlier. Its net debt position, however, shot up over 17-fold to $1.4 billion in the same period.

"We actually replaced some of the bank borrowings, as well as some capital expenditure," said Lenovo Chief Financial Officer Wong Wai-ming, explaining the company's cash outflow. He stressed that the company will have no problem funding the deal with Fujitsu, which is expected to close in the first quarter of 2018. 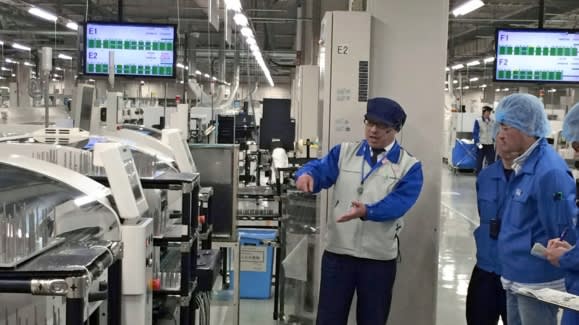 "The company is still in reasonable shape in terms of financing," said Wong. He noted that Lenovo's financial position is supported by a 3.9 billion Hong Kong dollar ($500 million) new share issue in September to a joint venture created by parent company Legend Holdings and senior management including Yang and Wong. It had also issued a dual-tranche, five-year bond worth a total of $1.35 billion in March, and another $150 million in perpetual securities in April.

The Fujitsu tie-up, which has been gestating since October 2016, came amid Lenovo's struggles to regain its leading position in the shrinking global PC market. Its product shipment has declined in eight of the last 10 quarters, commanding 21.4% of the market as of September, according to U.S.-based research firm Gartner.

In contrast, American rival Hewlett-Packard has registered growth for the past five quarters and is now the world's biggest PC maker, with a 21.8% market share. The global market shrank 3.6% on the year to 67 million units in the third quarter, extending its contraction to 12 consecutive quarters.

"Fujitsu has a strong premium commercial line," Tracy Tsai, research vice president at Gartner, told the Nikkei Asian Review. She said the deal "is very helpful for Lenovo to enhance its product portfolio and enter the high-end margin product segment." Tsai believes Lenovo would have a better chance to maintain revenue growth by focusing more on the premium segment in a maturing market.

The deal -- arising from Fujitsu's restructuring efforts and its shift toward the network infrastructure business -- marks Lenovo's third move to fortify its position in the PC market. The company bought U.S.-based IBM's PC division for $1.25 billion excluding debt in 2005, and created a PC joint venture with Tokyo-based electronics company NEC in 2011 by issuing $175 million worth of new shares to the latter.

As a segment, personal computers and smart devices accounted for 71% of Lenovo Group's total revenue. Yet it recorded a 15% year-on-year decline in fiscal second-quarter pretax profit to $659 million, dragged down by a component shortage as well as fierce market competition.

For the six months through September, Lenovo's bottom line slumped 80% on the year to $67 million. A 2% rise in revenue, to $21.78 billion, was offset by an 8% jump in operating expenses, as the company boosted advertising and promotional efforts, especially for new smartphone launches.

Both its mobile phone and data center businesses were in the red for the half. The former, built on the $2.91 billion acquisition of Motorola in 2014, recorded a pretax operating loss of $261 million, 5.7% narrower than a year ago. The latter saw its pretax operational loss surge by 52.9% to $214 million.

Lenovo's Hong Kong-listed shares closed up 2.2% to HK$4.68  Thursday, capping year-to-date losses at 0.43%, after the joint venture deal with Fujitsu and the earnings were announced during the lunch break. The benchmark Hang Seng Index edged down 0.26%, while gaining 29.6% so far this year.

The joint venture, which will retain the name Fujitsu Client Computing, has assets worth 149.97 billion yen. Its operating profit for the fiscal year ended in March more than quadrupled on the year to 9.22 billion yen on a pro-forma basis.

The venture's incumbent president and representative director, Kuniaki Saito, will remain in the same position after the merger. Its products will continue to be distributed and sold under the Fujitsu brand name.