TAIPEI -- In mid-October, China's No.1 contract chipmaker Semiconductor Manufacturing International Co. appointed Liang Mong-song, a Taiwanese chip veteran, as its co-chief executive. It was the latest high-profile move by China to lure Taiwanese experts to the mainland to help it build up its chip capabilities so as to cut dependence on foreign technology, said analysts and industry managers.

At a time when Washington is stepping up efforts to block Chinese acquisition of western tech companies such as Lattice and Aixtron, China is luring global businesses and experts to grow its own semiconductor prowess.

Liang, 65, worked at Taiwan Semiconductor Manufacturing Co., the world's No.1 contract chipmaker by revenue and market share, and then Samsung Electronics' system LSI division, which churns out logic chips such as core and graphic processors, and modems. 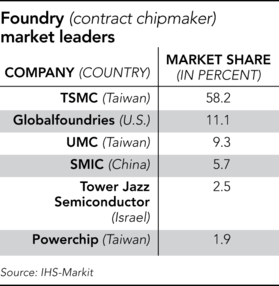 Liang was at TSMC from 1992 to 2009, and was sued by the Taiwanese company for leaking trade secrets to Samsung. In 2015, TSMC won the lawsuit against Liang who was banned from working for Samsung for a spell.

"Liang was special because he was one of TSMC's key insiders in the research and development field when he left for Samsung, TSMC's biggest rival to compete orders from Apple and Qualcomm," a former TSMC executive told Nikkei Asian Review. 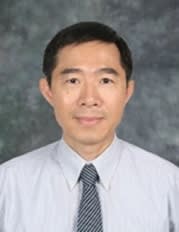 Apple and Qualcomm are TSMC's two biggest customers. The two U.S. companies contribute a total of 28% to TSMC's revenue in 2016. TSMC and Samsung have long been locked in a battle to win orders from Apple and Qualcomm.

SMIC, whose most advanced chips are 28 nanometers, is nowhere near the technological capabilities of TSMC and Samsung. SMIC currently supplies chips mostly for entry-level Chinese smartphones and other electronics.

Market watchers say that not only will Liang be able to help SMIC advance its technology but also connect the Chinese company to the global network of semiconductor experts, although it will take a while for his efforts to bear fruit.

Liang's appointment at SMIC means the Chinese chipmaker finally has an executive with experience in the world's top semiconductor companies, according to Clark Tseng, an analyst at SEMI, a semiconductor industry association.

Lin Jian-Hong, an analyst at Taipei-based Topology Research Institute, said Liang could help the Chinese company avoid making mistakes in its technological buildout. "Taiwanese talents could be the main target for headhunting thanks to similar cultural backgrounds, especially over the next two to three years when China is still aggressively investing and expanding its semiconductor industry," Lin said.

Taiwan is home to the world's second largest semiconductor industry by revenue, after the U.S. There are more than 230,000 professionals in Taiwan's sector who can easily be poached by China.

Over the last two years, several high-profile Taiwanese executives have also been lured by Chinese companies. Chiang Shang-yi, former TSMC co-operating officer, was invited to sit on SMIC's board as non-executive director.

Although SMIC is still lagging behind in chip production technologies by two to three generations compared with the world's top players, the Chinese company still plays a key role in Beijing's initiative to cut reliance on foreign chip providers such as TSMC, UMC, Qualcomm, MediaTek, Toshiba, Samsung and SK Hynix. State-backed SMIC is playing a key role in Beijing's efforts to boost the domestic semiconductor industry. (Photo by Cheng Ting-fang)

Chips are the brains in almost every electronic device and they are key to the development of emerging technologies such as artificial intelligence. Because of what they can do and provide in terms of data in national security, the technology behind them is closely guarded.

Even though SMIC's capital expenditure of $2.3 billion for 2017 still trails behind TSMC's $10.8 billion, its spending exceeds the level of its other competitors such as U.S.-based Globalfoundries and Taiwan's UMC, the world's No. 2 and No. 3 contract chipmaker respectively.

SMIC's $2.9 billion revenue in 2016 was only one-tenth that of TSMC's and its net profit of $377 million was an even smaller fraction of TSMC's, but it has been closing in on UMC and Globalfoundries in recent years.

For instance, Qualcomm has transferred orders for mid- to low-end smartphone chips from UMC to SMIC this year. In 2015, there was also speculation that SMIC tried to buy out Globalfoundries. Roger Sheng, an analyst at research consultancy Gartner, said many signs show that SMIC would expand in a decisive and sweeping manner in the next few years against the backdrop of Beijing's "Made in China 2025" policy directive. One of Beijing's goals is to raise the domestic production of core technology components and materials to 40% of domestic demand by 2020 and 70% by 2025.

China still imports more than $220 billion of semiconductor-related products in 2016, bigger than the amount it spends on oil. "On China's way to increase its own local supply, it is for sure that Chinese companies would continue poaching chip specialists with very competitive salary packages," Sheng said, adding that the country still faces a serious shortage of capable engineers.

According to SEMI, from the year 2017 to 2020, there will be a total of 62 new semiconductor plants or lines that will go into production worldwide -- 42% or 26 of them are in China. This growth is partly backed by heavy investments from foreign chip makers including Intel, Samsung and Hynix, to better serve China's booming market.

In terms of domestic investments, Tsinghua Unigroup plans to construct mega memory chip plants in the cities of Wuhan, Nanjing, Chengdu and Shenzhen. SMIC and its smaller local peer Huali Microelectronics will also expand aggressively to build chip facilities in Shanghai that will begin production no later than 2019.

Some newly built plants, however, could eventually cause a supply glut and add pressure on pricing, warned Topology's Lin. "It's very likely that there will be supply-demand imbalance in some segments within two years."

Indeed, no one is sure if China's huge investments in this sector would pay off, but in the near future, it shows no signs of letting up.

"To bring in executive like SMIC's Liang-- it's like asking a MLB player to coach middle school students to master baseball skills as there is still a huge gap," said an Taiwanese chip industry executive, referring to Major League Baseball. "It will really take time for China to pick up but their relentless efforts will definitely first cause some disruptions and tensions in human resources."