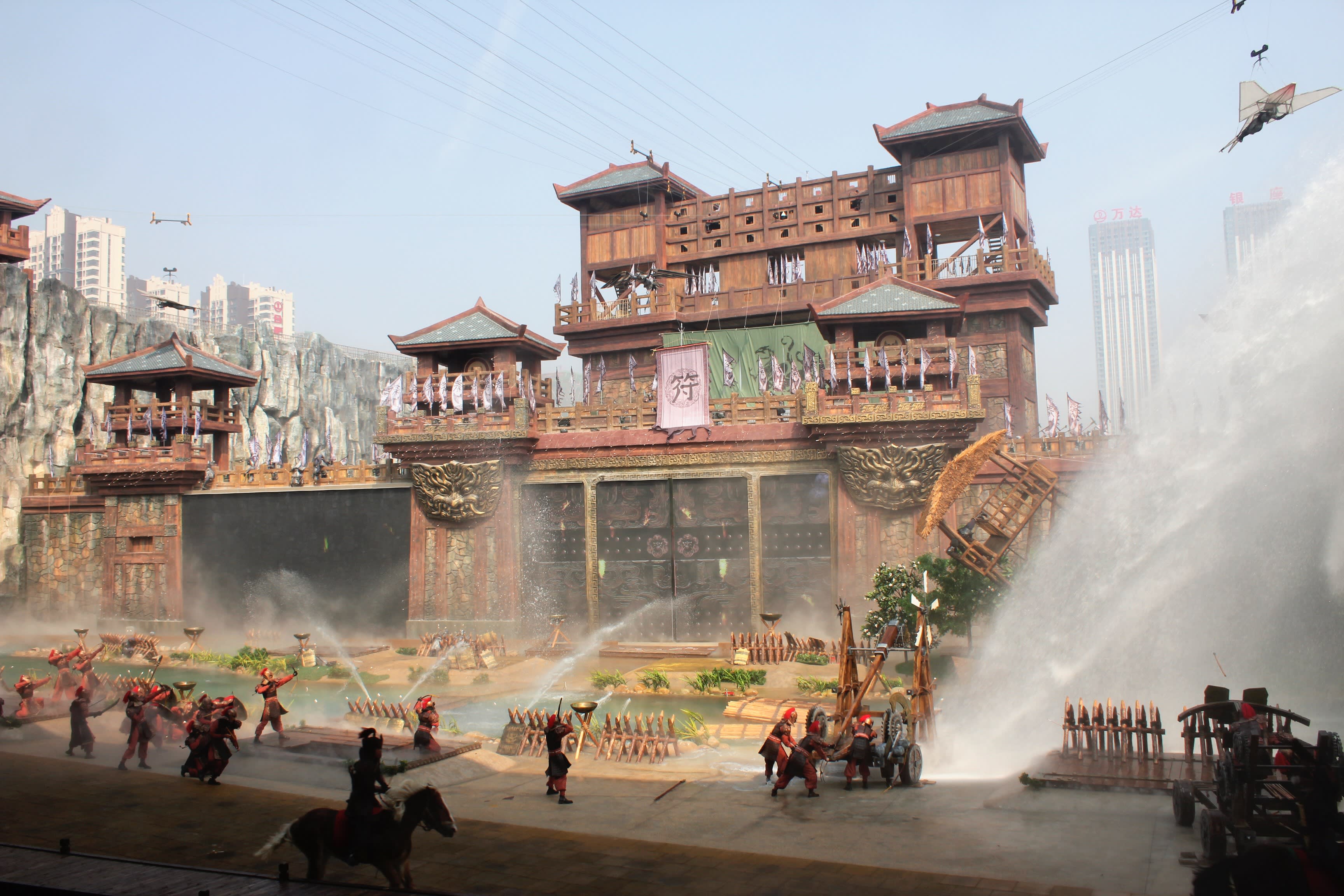 Towering condominiums are seen behind the set of an ancient war drama staged on Sept. 24 at Wanda's new theme park in Hefei, Anhui Province.

Wanda is rapidly expanding its theme park business to prevent the U.S. entertainment behemoth, which opened Shanghai Disney Resort in June, from achieving supremacy in the potentially lucrative market. In its latest move, Wanda opened Hefei Wanda Cultural Tourism City on Sept. 24 in Hefei, west of Shanghai. The company plans to build 15 similar entertainment complexes in China by 2020. Wanda is seeking to make its theme park business a key revenue source, like its movie operations, which involve a partnership with a Sony unit. But the facilities Wanda has opened have been plagued by problems. The company clearly has a long way to go to pose a serious threat to Disney's popular resort.

Hefei Wanda Cultural Tourism City sprawls across some 900,000 sq. meters and features a town built according to the city's architectural tradition. At a theater inside, a drama to recreate a famous ancient Chinese battle was staged on opening day. Against the backdrop of a castle wall, actors and horses moved dramatically, accompanied by powerful sound and water effects. Such high-powered dramas were designed to be one of the complex's main attractions.

But the stage effects were offset by a group of towering condominiums, built by Wanda, that could be seen beyond the castle wall. They made for an awkwardly modern background to the ancient drama. One member of the audience said the sight of the condos was "annoying."

In May, the company opened a similar entertainment complex in Nanchang, a city in the southeastern province of Jiangxi. Another Wanda City will be built in Wuxi in Jiangsu Province. All three parks are located around Shanghai, reflecting the company's strategy of trying to siphon visitors from Disney's resort.

Wanda is also planning to open similar facilities in a dozen other cities by 2020, including Guangzhou in southern Guangdong Province, the inland industrial hub of Chongqing, and Harbin in the northern province of Heilongjiang.

Wang Jianlin, the founder and chairman of Dalian Wanda Group, is betting on a strategy designed to overwhelm Disney through the sheer number of theme parks he builds. "Even a strong tiger cannot defeat a large number of wolves," he said. 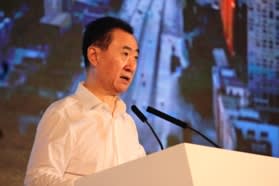 Wang is placing his strategic focus on the company's theme park business because Chinese consumers are becoming more interested in experiences than in goods.

During the era of China's breakneck economic growth, the country's increasingly wealthy consumers snapped up condos, cars and all kinds of luxury goods. Wanda built its sprawling real estate empire rapidly by riding on this wave of consumer spending at home. By building houses and commercial facilities across the nation, it grew into one of the biggest private sector companies in China in about two decades since its foundation in 1988.

As the nation's economic growth has slowed, however, Chinese consumers, who already have most of the goods they once craved, are now seeking high-quality services.

Signs of the shifting consumer behavior are abundant. Some 100 million Chinese make overseas trips every year, and the country is poised to overtake the U.S. as the world's largest movie market.

In response, Wang has decided to shift his strategic focus from the core real estate business to entertainment and other services. He has announced Wanda's withdrawal from condominium development and is closing many of the department stores it operates. Meanwhile, he has been ramping up the company's entertainment operations by buying movie theaters and acquiring the right to broadcast FIFA World Cup games in Asia.

In contrast to the movie theaters he has acquired, the theme parks he is building from scratch are struggling to generate profit. In July, Wang suddenly closed a movie-themed entertainment complex he built in Wuhan in Hubei province in 2015. The theme park failed to attract Chinese consumers, who felt its offerings were not worth the 240 yuan price of admission.

At the Wanda City in Nanchang in Jiangxi Province, a female Chinese character modeled on Disney's Snow White was criticized as a copy. In the new Wanda City in Hefei, characters that resembled Kumamon, a mascot created by Japan's Kumamoto Prefecture, and Universal Studios' Minions walked around the complex.

Few attractions in the park attracted lines of waiting visitors.

At the Sept. 24 opening ceremony, Wang expressed his desire to nurture Wanda Cities into tourist projects meeting global standards. But the company's efforts to accumulate operational expertise and develop necessary human resources are failing to keep pace with the rapid expansion of the business.

Wanda is facing a raft of tough challenges in its quest to become the entertainment king of China. The company has been seeking to reinvent its business model through a series of massive acquisitions, including its purchase of a U.S. movie studio.

But the spending spree has left the company saddled with a mountain of debt. Its decision to delist a subsidiary from the Hong Kong stock market indicates it is facing difficulty in raising funds.

Dalian Wanda Commercial Properties, the formerly Hong Kong-listed unit, had interest-bearing liabilities worth 215 billion yuan in total at the end of June, up 15% from the end of last year. Concerns about Wanda's financial health prompted S&P Global to downgrade the firm's long-term debt by one level to BBB, from BBB+, in February.

Chinese companies often transfer money-losing businesses and bad loans from listed subsidiaries to their unlisted parents. Wanda Group's total debt is believed to be much bigger.

Wanda Group delisted Dalian Wanda Commercial Properties from the Hong Kong bourse on Sept. 20 in the first step toward listing it on the Shanghai stock market in two to three years. During that period, Wanda will have to depend on bank loans and revenue from its own financial businesses for the funds needed to expand entertainment operations.