China's auto market isn't as strong as it looks 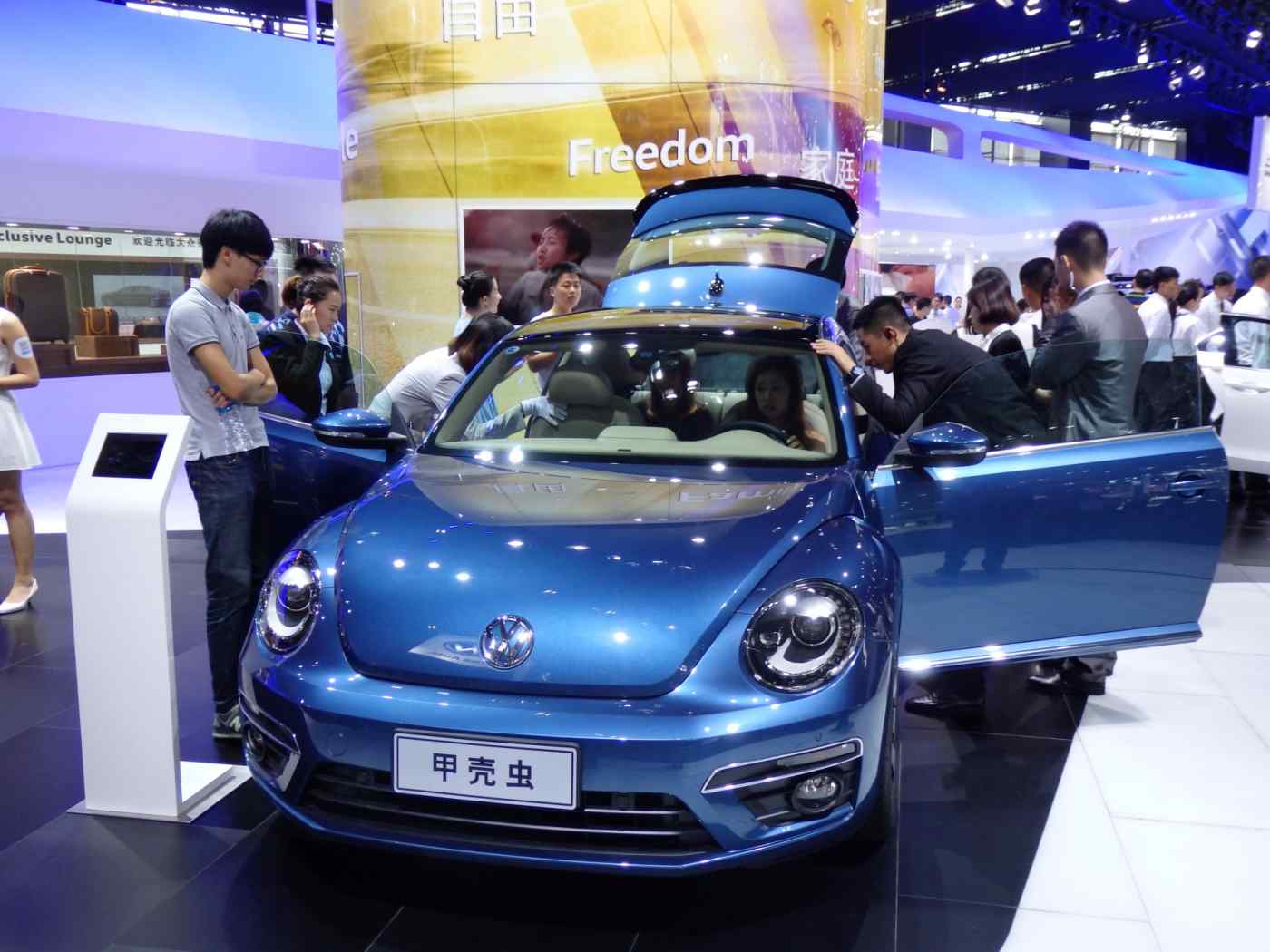 Auto shows like this one in Guangzhou still attract many prospective buyers, but demand may not be as strong as it looks.
YU NAKAMURA, Nikkei staff writerJanuary 21, 2016 12:00 JST | China
CopyCopied

GUANGZHOU, China   Something is amiss in the Chinese auto market.

The numbers still sparkle. Sales of new cars in 2015 rose 4.7% to 24.59 million vehicles -- the world's highest tally for the seventh consecutive year. The figure far exceeds the 17.47 million cars sold in the U.S., the second-largest market.

Look closer, however, and you will find that the sheen is deceptive. The market's growth "has little to do with business and more to do with politics," one industry insider said. He meant that Chinese automakers have been relying on government stimulus efforts to keep business humming, rather than improving their designs and other aspects of their cars. And stimulus measures can only take you so far.

In the first six months of 2015, as the country's economy decelerated, auto sales rose a modest 1.4% from the same period a year earlier. The growth rate, the slowest in many years, came as a shock. The China Association of Automobile Manufacturers had previously predicted that sales would increase by around 7% in 2015.

The summertime turmoil in China's stock market, which spilled over into global markets, also dealt the auto industry a blow. Retail investors who had been bullish about stocks took substantial losses; many people were likely forced to put off buying that new car they had been eyeing.

The government feared the sluggish auto market would affect a host of other industries -- steel, rubber, resins, semiconductors, electronic parts, textiles, fuel and glass. So in October, Beijing began offering a tax break to buyers of vehicles with 1.6-liter or smaller engines. The rate was halved to 5%; the government implemented a similar cut in 2009, in response to the global financial crisis. 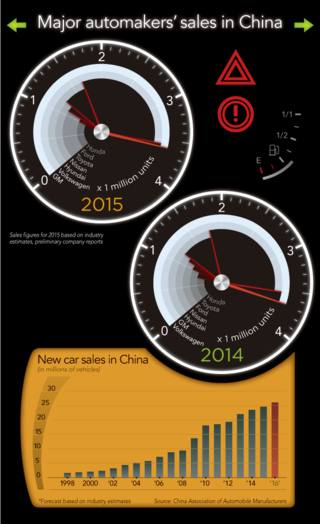 On a typical car, the discount comes to about $840. The measure seemed to pay off instantly. Auto sales registered double-digit year-on-year growth from October through December, after sliding from April through August.

The impact was felt across the industrial sector, though when assessing Chinese manufacturers' full-year performance, it is worth noting that the months up to September offer a more accurate picture. And even with the year-end rush, overall auto sales crawled to the slowest growth in three years last year.

CAUSE FOR SKEPTICISM   Many experts believe the dramatic turnaround is a mirage. Consider the 15% increase in auto sales in December. An official with a dealership in the southern province of Guangdong said that sellers were resorting to steep markdowns and waging irrational sales battles. "Marketers slashed prices in December and started a fierce price war," the official said.

"New cars are not selling as much as the statistics indicate and the number of customers has not increased that much," said the manager of another dealership. "But dealerships like ours stood to earn monetary rewards from car manufacturers if annual sales for 2015 were strong, so we built up our numbers by taking in more new cars toward the end of the year. Manufacturers can record strong sales figures by shipping a large number of cars to dealerships. So it benefited both manufacturers and retailers."

Many analysts, meanwhile, are concerned that the sharp recovery will eat into future demand.

Upon hearing the news of the tax break on small vehicles, auto manufacturers in China began boosting production in October. Homegrown automakers, in particular, took heart. Their cars tend to have less consumer appeal, compared to Japanese, American, European and South Korean brands.

Yet it seems many of those extra cars are collecting dust at dealerships. "I can't take at face value" the data showing a nearly 5% rise in new car sales in China for 2015, said an official of a major Japanese automaker.

AROUND IN CIRCLES   Global automakers' data for China appears to back up the skepticism. General Motors, which returned to the top spot in the sales ranking, moved 5.2% more vehicles in 2015. But second-ranked Volkswagen registered a 3.5% decline, and South Korea's Hyundai Motor, which placed third, posted a 4.9% fall. All in all, foreign manufacturers delivered a lackluster performance in a market where they usually excel.

GM chief executive Mary Barra still sounds bullish on China. Speaking at the Detroit auto show, which kicked off on Jan. 11, she said the world's biggest auto market "is going to be more volatile, but we still believe over the long term the market [will have] substantial growth."

Even so, the U.S. company seems to be bracing itself. GM on Jan. 10 announced it would start importing China-made Envision crossovers to North America as early as this year -- a first for a U.S. automaker. About 147,000 Envisions were sold in 2015.

From spring to fall last year, GM's monthly sales in China fell below year-earlier numbers. Some see the shift to the North American market as a way to make up for uncertain prospects in China.

Volkswagen, hit by its diesel emissions scandal, has been counting on the tax benefit. About 70% of Volkswagen vehicles in China qualify for the program, and the German automaker will continue to roll out compacts priced at 100,000 yuan ($15,100) or less, a senior official at Volkswagen Group China said late last year. New cars made by Chinese automakers sit on a dealership lot in Wuhan, Hubei Province.

While Guangzhou Automobile's sales of luxury and midpriced cars bearing the Toyota and Honda names suffered, sales of its own Trumpchi-brand cars soared 33.9% in December. Those vehicles are less costly compared with Japanese cars and many of them qualify for the tax cut. The GS4 SUV did particularly well.

The annual sales numbers, though, suggest Chinese manufacturers significantly boosted production in October, due to the tax break. It is not clear how much of that output found takers in the retail market.

Only Chinese manufacturers ramped up production to an extent that could be considered excessive, even though it was not certain their cars would sell. Many experts on the Chinese economy say these companies expect the government to come to their rescue if things go awry, since they increased production in response to a stimulus measure.

The automakers tend to pay little heed to market forces. Officials at dealerships that have amassed large inventories said they have no choice but to sell the cars at significant discounts. This is a vicious cycle, since discounts feed price wars that ultimately hurt manufacturers. The manufacturers then expect Beijing to help them out.

HOOKED ON INCENTIVES   Instead of implementing a long-term strategy to mold the auto sector into a pillar of industry -- complete with structural reforms -- the Chinese government is taking stopgap measures to try to stave off a more severe economic decline. But the country's fundamentals have changed since the period just after the financial crisis, when it was still riding high. Quick fixes like the tax break on small vehicles may actually have negative repercussions.

When China last dangled a tax break on small cars following the 2008 crisis, demand also spiked. After the tax cut expired, the market stalled for two years, until 2012. Now that the economy is weaker, China cannot afford a repeat of that experience.

Looking at it from another angle, the Chinese auto industry's reliance on government support may be a reason why it lags behind internationally, despite its massive home market.

On Jan. 12, the China Association of Automobile Manufacturers proudly declared that new car sales would rise another 5.9% to 26.04 million units in 2016. This would be the eighth straight year of world-leading growth. Yet few industry watchers, let alone the world's top automakers, see that projection as credible.