China's cross-border e-tailers on the rise BEIJING -- The quest for quality goods and low prices has led Chinese shoppers into dropping more of their cash on e-commerce sites selling products from overseas, a recent study shows.

Fueling the trend is the growing push among e-tailers to improve cross-border services, as well as support from the government. The growing marketplace offers significant opportunities for companies in countries like Japan, where domestic consumption is faltering. 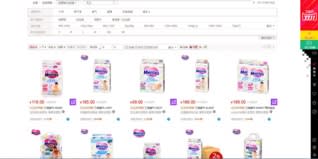 The Tsinghua-Nikkei Institute of Media Studies, a joint research organization between Japan's Nikkei group and Tsinghua University in China, has been studying this burgeoning market.

Every year, online retail leader Alibaba Group Holding and other e-tailers run major sales around China's Nov. 11 Single's Day. In November 2014, Alibaba for the first time introduced overseas merchants on Tmall.com, allowing customers to shop for goods from overseas. This included everything from fresh oranges and frozen lobster shipped from the U.S. and fresh cream from Europe to fashion brands like Gap and Zara.

The same day, Amazon.com's Chinese unit readied over 80 million items at European and U.S. distribution centers for shipment to consumers ordering through its Chinese website.

Just a couple of weeks later, China's e-tailers also ran "Black Friday" sales for the first time. Borrowing the idea from the major sale season around Thanksgiving in the U.S., Alibaba, for example, teamed up with four American department stores including Macy's and Neiman Marcus for its sale in China. Both Amazon's and Alibaba's shopping sites displayed product information in Chinese and allowed payment in yuan.

The number of merchants participating in Single's Day and Black Friday sale events are on the rise and competition is heating up. Some sites have also found success by specializing in specific areas.

Tmall Global was launched in February 2014. Alibaba says it strictly vets the site's merchants, who are all based outside mainland China. The company requires them to offer customer support and after-purchase support in Chinese, and to ship within 72 hours of order so that goods are delivered within 14 days.

For example, a user who wants to search for Kao's Steam Eye Mask, a highly popular product, only has to type the name into the search box and hit return. This immediately calls up a page showing the product, where the user can select a preferred merchant.

Most merchants on Taobao Global Shopping, which opened in 2007, are small operations handling consumer-to-consumer trades and services that buy from foreign sites on behalf of customers. The site offers many limited-edition goods and popular products.

Etao, on the other hand, focuses on providing detailed information on overseas products. It also aims to help customers search for high-quality, yet low-price products and solve issues they face immediately before and after making a purchase.

JD.com, the second-ranking Chinese online retailer after Alibaba, officially rolled out JD Worldwide in April 2015, initially with over 450 shops, over 1,200 brands and over 150,000 items on sale. It has a tie up with a global logistics company to operate in 50 countries worldwide.

The site allows users to browse products by location, and touts guaranteed authenticity.

Of China's top five web portals, NetEase was the first to launch its own cross-border retail site in January 2015, with NetEase Koala. The operation holds bonded warehouses in key Chinese cities, Hong Kong and San Francisco, whose combined floor area is by far the largest of any of China's cross-border online retailers.

The website's biggest advantage is speed of delivery: Merchandise ships within two hours after payment is confirmed. It is also characterized by low prices and a simple purchase procedure.

Other successful online cross-border retail sites include those specializing in a specific area of merchandise or focusing on customer relations.

Miyabaobei, for example, is a site specializing in baby products launched in February 2014. It introduced limited-time sales of products from popular brands -- the first of its kind in China. The site makes stocking decisions based on what users have said they want to buy.

Xiaohongshu, on the other hand, is growing its customer base by focusing on maintaining and growing a user community around its website. The site, which introduced unique ways of product presentation and measures to enhance reliability of word-of-mouth information, has won the hearts of users in their 20s and 30s. During its three-day Black Friday sale in 2015, it registered an additional 2 million users.

Users share product reviews on the site. The operator says the site attracts many overseas brands because it allows them to view first-hand evaluations of their products.

Amazon's logistics network in China became its second largest after the U.S. in 2014. Operating out of over 10 offices in the country, the local unit ships on order and offers next-day delivery in over 1,400 Chinese cities.

China's exploding cross-border online retail sector has also attracted Japanese companies, including parcel delivery giant Yamato Holdings. This past May, the company launched an express delivery service for products ordered online by Chinese consumers in a tie-up deal with JD.com.

The deal, in which Yamato handles the complex customs clearance process to speed up delivery, is the first in cross-border online retail between a major Chinese online retailer and a big Japanese logistics company.

The Tsinghua-Nikkei Institute of Media Studies is a research organization set up jointly in 2006 by China's renowned Tsinghua University and the Nikkei group. It conducts research on new technologies, such as the digitization of newspapers and other publications, and the media industry in both China and Japan.