Finding and paying for power can prove a headache for drivers 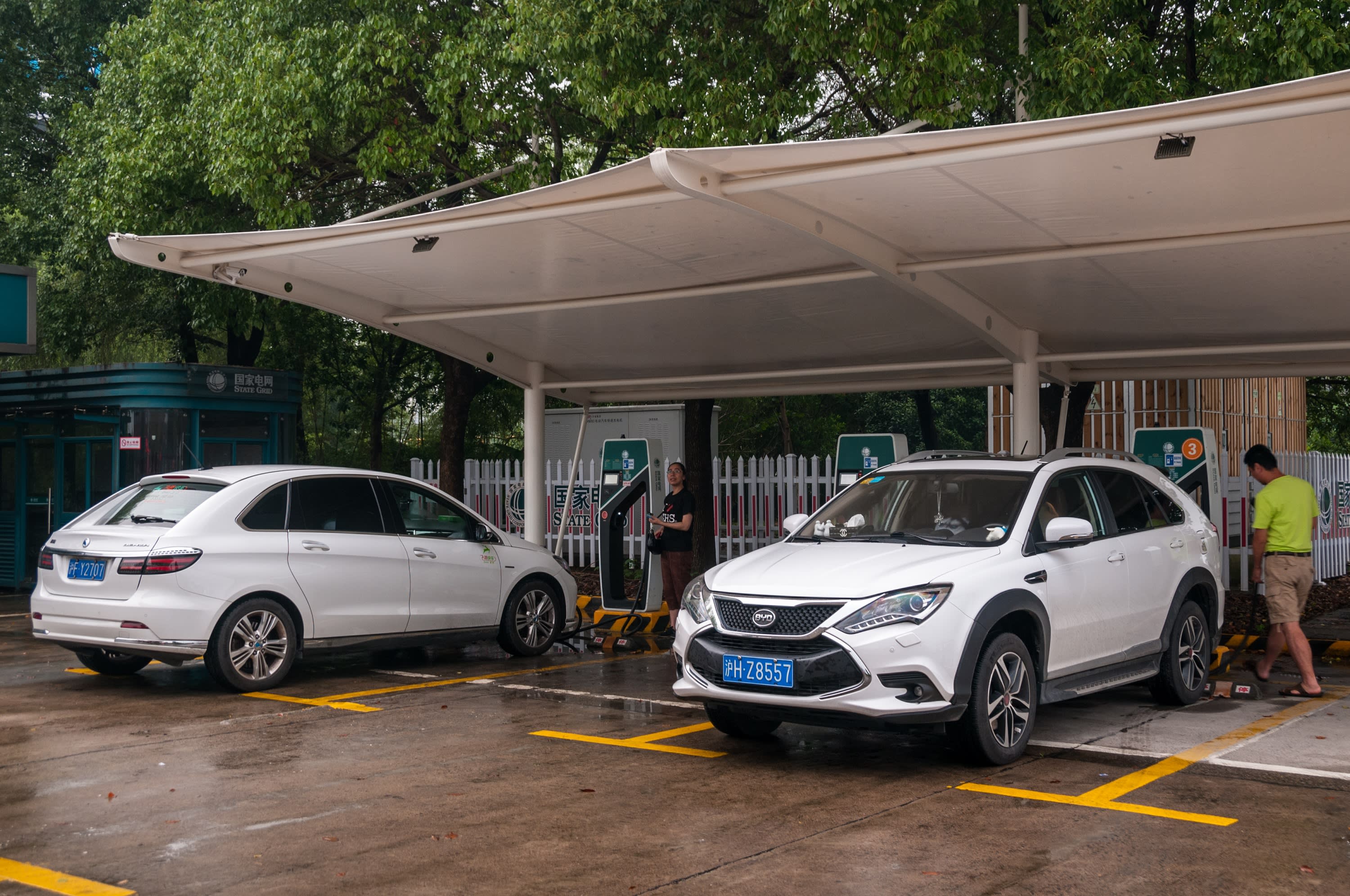 A man plugs his BYD Tang hybrid in for a charge near a Denza already charging at a State Grid highway station between Hangzhou and Shanghai. (Photo by Mark Andrews)
MARK ANDREWS, Contributing writerJuly 1, 2017 19:00 JST | China
CopyCopied

CHONGQING, China -- It is nearly 9 p.m. on a Sunday at automaker Lifan's production site in the Liangjiang New Area suburb of Chongqing, yet the place is a hive of activity as batteries are loaded into vans. PandAuto, a car-sharing company in which Lifan has invested, operates fleets of electric Lifan 330 cars in several Chinese cities, including Chongqing. These vehicles use swappable batteries, and the site is Chongqing's hub for recharging them.

China's fleet users usually have their own dedicated charging stations. EVCARD, a car sharing company, has chargers at all its pick-up and drop-off stations, and as users typically hire cars for short journeys, worries about vehicle ranges are not a problem. But matters are more complicated for private consumers.

China has experienced rapid growth in sales of new energy vehicles -- a Chinese term encompassing all-electric cars known as battery electric vehicles and cars that can run on either carbon fuels or batteries that can be charged from an external power source, which are known as plug-in hybrid electric vehicles. But the growth in sales has been accompanied by a confusing rise in competing methods and standards for charging stations, along with associated apps and payment systems.

It is little wonder that the average consumer has been left feeling bewildered. "I've tried charging my car away from home, but couldn't, either because the charger head wouldn't fit or I had to buy a pre-charged card," said Liu Sheng, a Shanghai resident who owns a locally-produced Volvo S60L plug-in hybrid vehicle.

At the end of 2016 there were 141,254 public charging stations in China. But an investigation of more than 500 sites across 32 cities by David Zhang, an independent electric vehicle charging expert, found that 70% of charging facilities were vacant and a quarter were occupied by non-new energy vehicles, leaving only 5% for charging.

"Because of the difficulty of renting a good location, most charging facilities have been installed in the wrong place. It is a common phenomenon for [nonelectric vehicles] to be parked in the space or an [electric vehicle] not being charged occupying the space because of a lack of punitive measures," he said.

"The manufacturers and the operators of the charging stations wanted to occupy market share quickly. They installed charging stations anywhere without much consideration," said Fiona Wu, marketing head at Chargedot, a charging solutions company.

Drivers of new energy vehicles face problems not just locating but also paying for public chargers. "If a [new energy vehicle] driver wants to avoid running out of charge when away from home they will need 10 apps and cards. This will allow them to find and access about 80% of all chargers in China," said Zhang. Drivers who remain within either Shanghai or Beijing can make do with five, he added. Each city has its own app, which aims to support drivers by providing a more unified system, but no such system exists nationally.

New energy vehicles attract a national subsidy and, depending on where they are registered, a local subsidy and other benefits. Shanghai last year stopped paying the local subsidy unless purchasers install chargers. Buyers of Roewe new energy vehicles get a free charger installed by Zhuang Best, a Chargedot company. However, this can be problematic because many purchasers do not have a dedicated parking space. Liu charges her Volvo daily through a jerry-rigged line of extension cords from her second-floor apartment. Wu has no place to charge his BYD at home, but regularly charges it near work.

A driver in Shanghai for ride-sharing app Didi admitted he never charges the Roewe e550 plug-in hybrid vehicle that he rents each month for 6,000 yuan ($870), but just fills the fuel tank when necessary. Against this background of practical difficulties, a report published this year by KPMG, a professional services company, showed that less than half of new energy vehicle owners surveyed would buy another such car, indicating a general dissatisfaction with the experience.

The method, frequency and amount of charging can affect the longevity of batteries. Lifan's alternative model of swapping batteries is intended to address this. "Changing batteries can provide a lot of benefits; the key benefit is in terms of energy conservation," Chen Wei, Lifan's deputy chairman, told the 2016 Global Automotive Forum in Chongqing. Each car-sharing Lifan 330 can have its eight batteries changed in less than three minutes. This is cheaper than an investment in charging stations, and customers do not have to worry about parking fees.

Currently Lifan electric cars are only available to fleet users such as PandAuto. Through centralized charging, the user company can benefit from charging at nonpeak times, using electricity that would otherwise be wasted.

A new national standard for charging stations was implemented in January 2016, covering issues such as safety, charging temperature, electronic locks and discharge circuits. Many charging facilities installed before 2015 will probably need to be scrapped because they cannot meet the new standards. "Nearly half of the enterprises are likely to be eliminated, according to the reports," said Wu. Most new energy vehicles currently on sale should be fully compatible with the new standard for chargers.

So far, Chinese manufacturers have benefited most from the drive to new energy vehicles. Toyota, which launched a plug-in version of its Prius conventional hybrid vehicle in Japan in December, currently sells only conventional hybrids in China -- cars that use carbon fuels, but have engines that are also used to charge batteries for supplementary or replacement power. Toyota's sales of conventional hybrids surged eight-fold to 71,676 in 2016 after the company commenced local production of battery packs and motors in 2015. Sales were also helped by greater Chinese government encouragement of conventional hybrids from 2016. 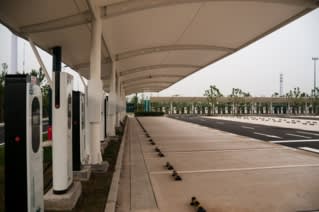 James Chao, Asia-Pacific managing director at IHS Automotive, a vehicle industry research group, said there had been "a measurable shift" away from plug-in hybrids and battery electric vehicles. This was partially because of a pullback in subsidies on such vehicles, "but also, I think, because of increased production [and consequently] sales of [conventional] hybrids, which are becoming a larger part of the mix of vehicles as automakers find solutions to meeting the stringent fuel efficiency regulations coming in 2020," he said.

Until private consumers have a reliable easy-to-use system to find and pay for public chargers they will resist buying new energy vehicles, or favor plug-in hybrids over fully electric cars. In a country known for central solutions this is one industry that is crying out for one, especially if China's new energy vehicles dream is to gain more traction with private consumers.

"For urban consumers who are technologically inclined and a bit more forward thinking, the charging station coverage issue is becoming less of a hurdle. That said, for the vast majority of consumers, the hurdle is still quite high, and this remains a significant barrier to adoption," said Chao.