China's garment factories try to stay one stitch ahead

Automation is key for textile makers amid soaring wages 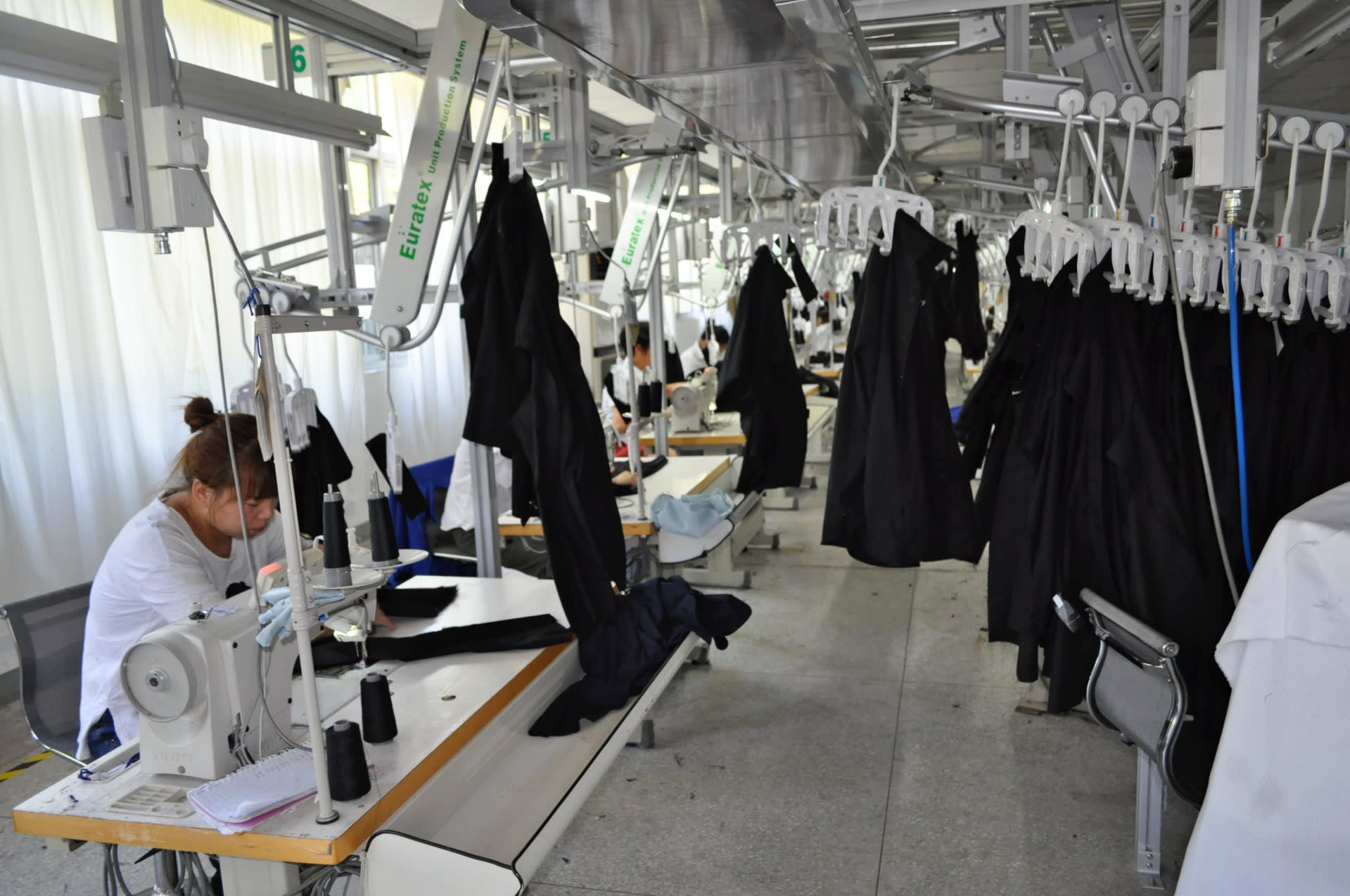 CHANGZHOU, China -- Chinese garment makers that produce for global for clothing labels are automating and rethinking their production process to make their factories more efficient. As the country's labor costs soar, contractors are fighting to stay competitive with rivals elsewhere in Asia.

Chenfeng Group, a leading contractor for the Uniqlo clothing chain operated by Japan's Fast Retailing, recently set up a production line using a hanger system in a corner of its huge garment factory in Changzhou, northwest of Shanghai. The factory makes 1.3 million shirts a month.

With the new system, shirts are assembled on a single hanger that moves around the production line, guided by circular rail suspended from the ceiling. The hanger stops in front of a worker, who attaches a part to the shirt or performs a task. When the worker is done, the hanger moves on to the next step, making its way around the circle until the item is finished. 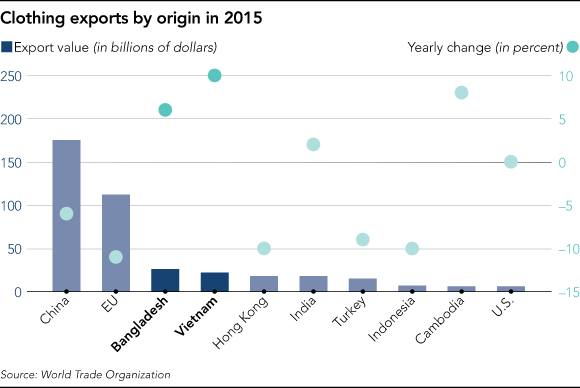 Some 50 sewing machines and their operators are deployed along the rail. Sensors determine how fast each operator is working and send the shirts to the best operator for the task at hand. The time needed to complete each step varies, depending on its complexity and the skill and experience of the worker.

Before the new assembly method was put in place, it was difficult to keep track of progress for each of the 47 steps in the assembly process. Delays in particular steps slowed production all along the line. The new system raises production efficiency by 15%, according to a factory spokesman.

"We have heavily relied on manual work for manufacturing," said Yin Guoxin, Chenfeng's chairman and CEO. "There should still be plenty of scope for automation, both in assembly and parts-making."

The new system may go into full-scale operation by September. The clothing maker aims to introduce the system at around 200 of its production lines in its nine factories across China in the next two years. This will increase total output to 10 million shirts monthly by 2020, from roughly 6 million at present. Chenfeng plans to spend a total 2 billion yuan ($299 million) from fiscal 2013 through fiscal 2018 to increase production.

The change to production methods is not simply a matter of installing the hanger system. It also involves automating specific processes. The company is working on semiautomation of tasks such as attaching buttons and pockets, as well as sewing the center back line. This reduces the number of people needed for each step from several operators to just one. Machinery makers are helping with the automation process. Behind the efficiency drive is rising labor costs. According to the Japan External Trade Organization, the monthly basic wage in China topped $400 on average last year. That was twice as high as the monthly wage in Vietnam, and four times higher than in Bangladesh.

Labor costs in China are expected to continue rising by 10% a year or more. That has already prompted some garment makers to shift production to Southeast Asia.

In 2015, China's clothing exports totaled $175 billion, or around 40% of global exports, according to data from the World Trade Organization. The value fell 6% from a year earlier, while shipments from emerging economies such as Bangladesh, Cambodia and Vietnam rose.

But Chenfeng's chairman appears optimistic. "Taking different aspects into account, total manufacturing costs in China should be cheaper than in rival countries for the time being," said Yin. China has long been a center of garment manufacturing for global clothing brands, demonstrating solid craftsmanship and efficiency.

China is also home to many textile factories and is a huge clothing market in its own right. The country has obvious advantages in terms of proximity for shipping both raw materials to producers and finished products to consumers.

Bosideng, China's largest producer of down clothing, is also moving forward quickly with automation to keep work in China. While the company is considering moving some production to Vietnam and other locations abroad, "producing in China will remain important for us," said CEO Gao Dekang.

At present, about 20% of its production lines are automated. "We want to increase the percentage to 50-60% within several years," said Gao. Potential areas for automation include fabric cutting machines and down filling machines. The company is also looking to introduce robots for picking goods in warehouses and shipping.

Despite these efforts, some garment makers have already moved their factories outside China. For rapidly growing private-label retailers, such as H&M of Sweden, cost-cutting is relentless as they hop from one location to another looking for cheaper labor.