China's major IT players hit the road with car-related businesses

BEIJING -- China's three major information technology companies -- Baidu, Alibaba and Tencent -- are embarking on automobile-related businesses, accelerating the use of IT in cars. 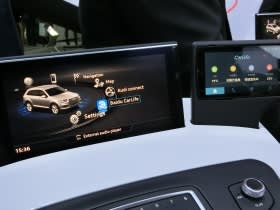 Audi's demonstration of Baidu CarLife attracted a lot of attention at CES Asia 2015.

Tencent, meanwhile, acquired an 11.28% stake in NavInfo, a Chinese rival of AutoNavi, last year, becoming its second-largest shareholder after the Chinese government. The company encourages automakers to adopt its QQ instant messaging service as an application for in-car information systems.

The companies' moves were confirmed at the 2015 International CES Asia trade show in Shanghai in late May. As a platform linking smartphones to in-vehicle information systems, Baidu's CarLife attracted visitors' attention most. CarLife is the same kind of system as Apple's CarPlay and U.S. tech company Google's Android Auto, but it was developed specifically for the Chinese market. It uses Baidu Map, the most popular map data service in China, and provides a variety of local information. FAW Audi and Shanghai GM exhibited in-car information systems equipped with CarLife. Baidu said it will also cooperate with Huawei Technology, a Chinese networking and telecom equipment and services company, in a data communications business based on the LTE, Long-Term Evolution standard.

I visited Baidu's headquarters in mid-June to learn more about CarLife. The headquarters is located in the Shangdi Information Industry Base, an IT industrial area about 10km northeast of central Beijing. Around the company, we find leading Chinese universities, such as Peking University and Tsinghua University, and government research institutions. The Baidu campus, completed in 2009, has green spaces, a basketball court and other facilities. Baidu's CarLife system is displayed on a screen in GM's Cadillac SRX at CES Asia 2015.

Baidu co-founder and CEO Robin Li Yanhong studied information management in the U.S. He returned to China in 1999 after obtaining a U.S. patent on a type of hyperlink analysis. In January 2000, he established Baidu at Peking University, his alma mater. The company started with seven members, including Li.

Baidu's main business consisted of developing a search engine with advertising revenue and analysis using big data. China's rapid economic growth helped the company to rapidly expand its business and list on the Nasdaq in August 2005. The company's workforce increased to 20,900 by the end of 2012 and to 31,700 by the end of 2013, and currently numbers about 47,000, according to Baidu. The average age of the employees is 25.8. Some 5,000 people work at the headquarters.

Baidu also has two research centers in Beijing, including one in the Zhongguancun Science Park, about 1.5km from company headquarters. About 10,000 people work at the facilities. The company has stepped up research on big data and deep learning, and has established the Institute of Deep Learning, where it is conducting joint research with BMW.

The company also has research centers in Shanghai, Shenzhen, Silicon Valley, Tokyo and Singapore. The one in Silicon Valley, opened in May 2014, has laboratories dedicated to big data, deep learning and artificial intelligence and employs about 130 researchers. Andrew Ng Yan-Tak, a leading Chinese AI researcher who previously worked at Google in the U.S., is now chief scientist at Baidu's headquarters. Baidu operates in three core businesses, in which it is the market leader. In the search engine business, the company has a combined market share of 71% for personal computers and mobile devices. In the map service business, it has a share of over 70%. Its apps for PCs and mobile devices see 174 million downloads per day, equivalent to 40% of total downloads in China.

The company is accelerating a shift to O2O (online to offline), a method of enhancing real-world services, such as issuing coupons, to increase customer satisfaction, rather than handling everything online. Its Baidu Connect service, for example, has some 700,000 items registered in about 70 categories, and the service generated $7.9 billion, about one-ninth of the total market, in 2014. In the first quarter of 2015, sales through the service amounted to $2.05 billion, according to Baidu.

Along with the shift toward O2O, Baidu is increasing its participation in the auto industry. One example is CarLife. The company's Telematics department, which developed CarLife, originally belonged to the Baidu Map development team. It separated from the team in 2013 to become an independent department.

The basic package of content for CarLife consists of navigation, music and telephone. "We do not plan to adopt [SNS] for now because we are not sure that drivers can drive safely with them," the company official said. CarLife's technological strength is "its ability to analyze big data at the back end," the official said. "It has a system for collecting data on traffic conditions from onboard information devices." Baidu Map can accumulate the driver's driving and behavioral histories in detail, and use the data offline.

The Open Automotive Alliance, led by Google, adopted Android Auto, a platform that links in-vehicle information devices and mobile devices, in the first stage, and in the second stage it is strongly recommending Android as the operating system for in-vehicle information devices. Baidu flatly denied that it is considering taking part in any OS for in-car information devices. The company also denied that it was doing anything to encourage carmakers to adopt CarLife. As of June, Audi, Germany's Daimler, General Motors of the U.S. and South Korea's Hyundai-Kia Motor group had announced their intentions to adopt CarLife in China, and other foreign automakers are talking separately with the company, according to Baidu.

As for digital maps, like Google Maps, Baidu says it has mapping vehicles and is using them to make highly accurate maps of China. It is also purchasing map data from NavInfo. Baidu has a partnership with car-hailing service Uber in China, and shows an Uber service icon on the Baidu Map screen.

Alibaba dominates China's online shopping market. In 2014, the company's Tmall accounted for 61.4% of the market and 86.2% of the mobile shopping market. Alibaba, which is likened to Amazon for Japan and the U.S., has now ventured into online sales of new cars. 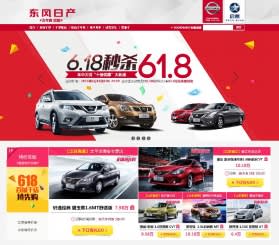 On this website, created jointly by Dongfeng Nissan and Tmall, potential customers click on cars they like, and are guided to the websites of nearby dealers.

Online shopping is growing worldwide, but new cars are not yet widely available over the Internet, even in developed countries. Alibaba has launched an online sales service for new cars, and the company says about 50 brands are already available through the service. For example, Dongfeng Nissan Passenger Vehicle and Tmall have jointly opened an individual sales site for Nissan Motor's cars. Customers can find out about a car at the site, and then be guided to the site of the nearest dealer and shown an estimate, allowing them to quickly buy the car. The main advantage of this system, Alibaba said, is that the insurance, loan and maintenance contracts that accompany the purchase of a new car can also be sold.

About 1,000 dealers have joined Tmall, including those of the Nissan brand, and they deal with some 60 million car owners. Alibaba said 120,000 cars were sold through the online service in 2014. Online sales allow promotions based on purchasers' and potential customers' histories.