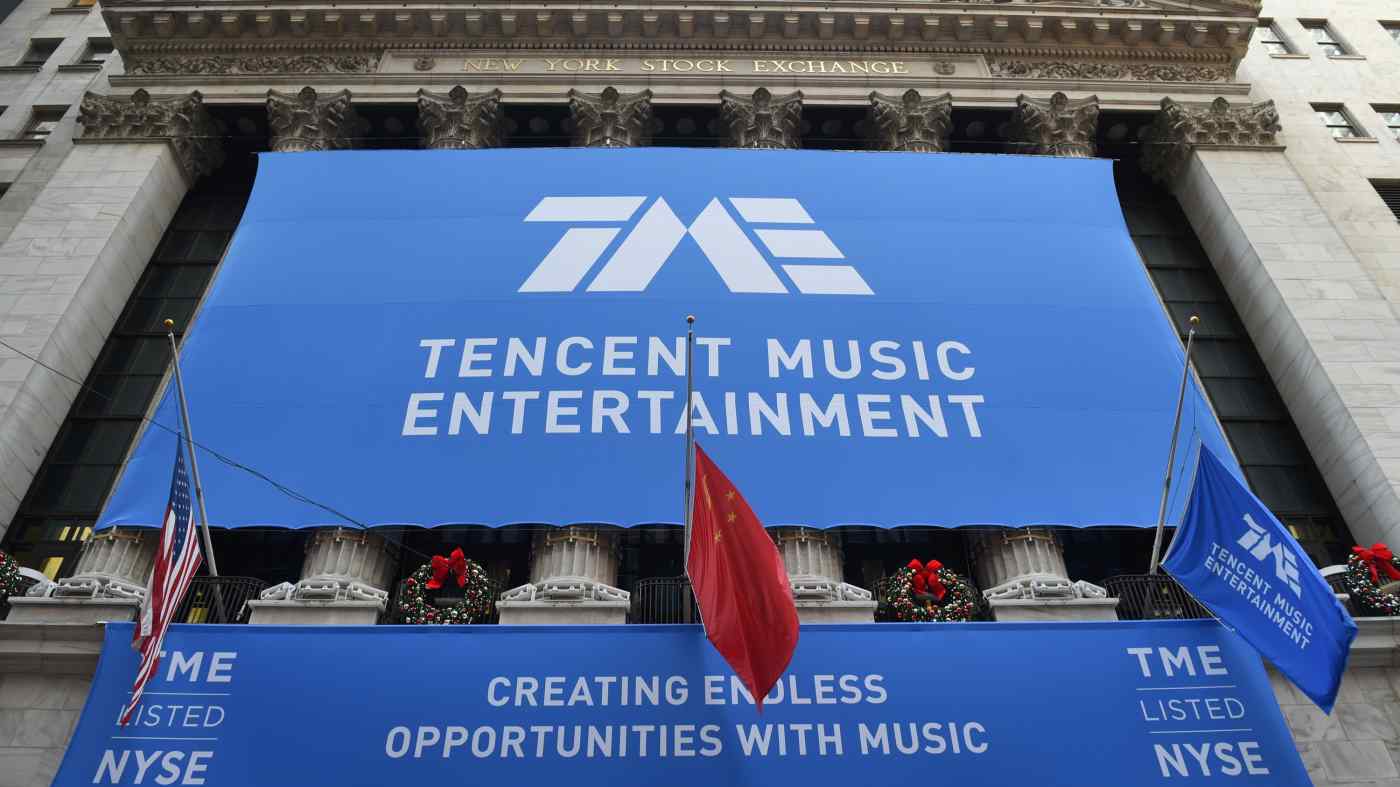 According to four people familiar with the plans, Tencent Music, a unit of Tencent Holdings, is in talks with banks for a Hong Kong offering that could raise up to $3.5 billion while Vipshop is targeting up to $2.5 billion and Joyy is looking to raise just under half that amount.

Tencent has yet to determine a listing timetable, two of the people said. The offerings of Vipshop and Joyy could take place in the second or third quarter of this year, subject to regulatory approvals and market conditions, three of the people said.

Spokespersons for Tencent Music and Joyy declined to comment while Vipshop did not immediately respond to queries from Nikkei Asia. Vipshop Holdings has a market capitalization of $20 billion, while Joyy is valued at $6.7 billion. (Source photos by Getty Images and screenshot from Joyy's website)

"Investors have been largely eager to get a slice of these Chinese companies," one of the persons familiar with the plans said. "The companies offer a chance to partake in the fastest-growing segments of the Chinese economy -- and, given they are already customers, investors are also familiar with the companies."

Nasdaq-listed Bilibili has filed a confidential application for a secondary listing with the Hong Kong Stock Exchange to raise up to $3 billion as soon as March. Baidu has started preparations for an offering of at least $3.5 billion while Trip.com and Autohome are planning share sales of $1 billion each, said the people familiar with the Chinese offerings.

A secondary listing in Hong Kong allows Chinese companies to expand their investor base and also serves as a hedge against potential delisting in New York.

Since November 2019, when Alibaba sold shares in a secondary listing in Hong Kong, 10 U.S.-listed Chinese companies have raised $30 billion in the territory, according to data compiled by Refinitiv.

As of October 2020, there were 217 Chinese companies with total market capitalization of $2.2 trillion trading on American exchanges, according to the U.S.-China Economic and Security Review Commission.

Tencent Music could be the first company to make use of a rule change made late last year by the Hong Kong exchange.

The new regulation allows companies from greater China which have corporate stockholders with enhanced voting rights, such as Tencent Music, and primary listings on a qualifying overseas exchange -- including the New York Stock Exchange and Nasdaq -- to pursue secondary listings in Hong Kong. Those which have listed abroad since October 2020 will not qualify.

The rule change has expanded the number of New York-listed Chinese companies that could list in Hong Kong from 20, excluding those already trading in Hong Kong, to as many as 60, according to analysts.

Tencent Music, which could offer from 5% to 10% of its shares in its Hong Kong listing, chose the NYSE for its initial public offering in December 2018 because, among other things, it allowed corporate dual class shares. It has a market valuation of $35 billion and has climbed more than 50% over the past year.

Tencent Music, which also counts Spotify as an investor, has more than 600 million monthly active users on its mobile apps and has been expanding aggressively through acquisitions. Together with Tencent Holdings, it has built a 20% stake in Universal Music Group over the past year. It also acquired a minority stake in U.S. virtual concert company Wave and a 1.6% stake in U.S. music label and publisher Warner Music Group valued at $240 million.

Vipshop, known for selling branded products at a discount, has a market capitalization of $20 billion, and Joyy is valued at $6.7 billion.

Joyy, founded in 2005, was among China's earliest livestreaming companies. But its growth has been lackluster in recent years compared with ByteDance, the operator of TikTok, and Kuaishou Technology, which is also seeking a Hong Kong IPO.

Joyy agreed to sell YY Live's China business to Baidu in November, but the business was hit by allegations of accounting fraud in a report published by short-seller Muddy Waters shortly afterward. Joyy denied the allegations.