HONG KONG -- China's internet boom arose in big cities on the coast. Now, to maintain their growth momentum, the country's internet companies are shifting their attention in another direction: towards China's vast rural hinterland.

Alibaba CEO Daniel Zhang, who earlier this month also inherited the chairman title from founder Jack Ma, even went so far as to name "successful penetration into less-developed areas" as the company's No. 1 achievement in the second quarter of this year. Of the 20 million new users Alibaba gained in the April-to-June quarter, more than 70% came from China's smaller cities and rural areas.

Meituan Dianping, a leading food delivery and ticketing service provider in China, also turned profitable in the April-June period thanks in part to new growth in less-developed areas.

"The growth in our food delivery transactions in lower-tier cities outpaced that in higher-tier cities," Chief Financial Officer Chen Shaohui of Hong Kong-listed Meituan said in an August earnings call. Chen added that the majority of the company's new customers also came from smaller cities and Chinese villages.

The search for growth in so-called lower-tier cities is echoed by JD.com. "We will continue to enhance our user experiences and also gain more potential customers from third- to sixth-tier cities," JD.com's founder and CEO Richard Liu told analysts at an earnings call last month.

Such announcements come as growing purchasing power in smaller cities and rural China is turning heads. Thanks to Beijing's efforts to push economic development into the inland, combined with generous government subsidies on the purchase of televisions, washing machines and other home appliances, residents in areas once viewed as economic backwaters have now become the new driving force of the country's consumption upgrade.

In the first half of 2019, per capita consumption expenditures in rural China surged 6.4% from a year ago, outpacing the national average of 5.2%, according to the National Bureau of Statistics of China. The figure was also higher than the 4.1% growth of urban dwellers.

Some internet companies have already benefited from serving the countryside.

Douyin, a short-video app operated by Beijing-based ByteDance has challenged the dominance of technology conglomerate Tencent Holdings in social networking by cultivating an army of 500 million monthly active users, mostly from less-developed regions.

Pinduoduo, another startup focusing on bargain-hunting customers in rural China, has grown into the country's third-largest e-commerce platform in four years. Nasdaq-listed Pinduoduo has now started to expand into big cities, shaking up the urban hold of Alibaba and JD.com. 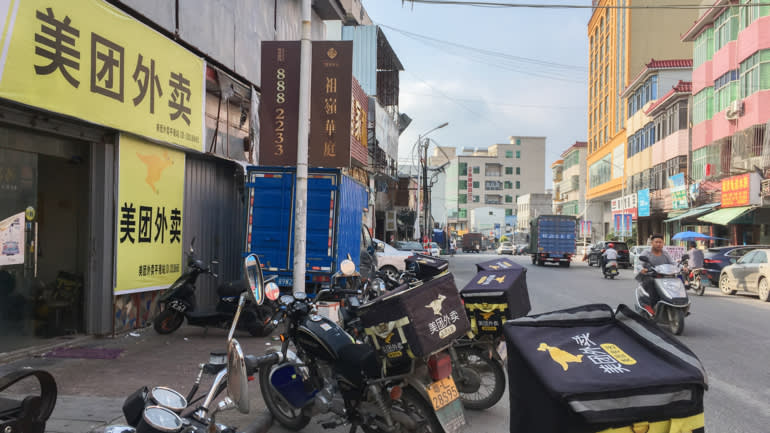 A Meituan Dianping store in a village in Guangdong Province. One analyst says that while online transactions from less-developed areas are low for now, they will soar once buyers are familiar with e-commerce. (Photo by Coco Liu)

For e-commerce operators, the pressure to gain a foothold in smaller cities and rural China is mounting. Since most of the tech-savvy smartphone users in big cities have already shopped online, Alibaba is "doing everything they can to push up the boundaries of China's e-commerce," David Dai, an analyst at Bernstein Research, told the Nikkei Asian Review.

That sentiment is shared by Thomas Chong, an analyst at Jefferies. "Progress in lower-tier cities and a subsidies campaign remain key focus areas for online shopping and local services in the second half [of this year] and 2020," he wrote in a recent research report.

Indeed, Alibaba placed consumers in less-developed regions at the center of its 6.18 Mid-Year Shopping Festival this year, introducing products specifically designed for rural families and slashing prices seemingly without regard for profits. JD.com, for its part, has pledged that it will invest 1.8 billion yuan ($253.1 million) this year in a move to boost its presence in smaller cities and villages.

But analysts warn that rapid expansion into China's inland is not necessarily good for corporate balance sheets -- at least not immediately. For one, residents in rural China spend far less than their urban cousins on e-commerce, and delivering goods to households scattered across the countryside has higher logistics costs.

As companies fight over market share in this emerging sector, "it may not have a significant impact on the revenue growth or profit growth in the short to medium term," said Danny Law, an analyst with Chinese brokerage firm Guotai Junan International.

"If you look at Taobao, average users are spending 8,000 yuan [$1,125] per year," Leung said, referring to Alibaba's flagship online marketplace that is popular among Chinese urban dwellers.

"A lot of users on Pinduoduo still spend 400 yuan per year," she said. "There is a lot of potential in upselling users in those lower-tier cities."