Alibaba executive tells investors not to worry about US delisting HONG KONG/NEW YORK -- With the coronavirus pandemic weighing down operations and investments, Alibaba Group Holding has reported its first quarterly profit decline since 2016.

Revenue in what Chief Financial Officer Maggie Wu called "a challenging quarter" rose 22.3% in the quarter to March 31 to 114.31 billion yuan ($16.08 billion) from a year earlier. That was slightly above the market consensus of 107 billion yuan, as surveyed by Refinitiv, but represented the slowest growth in at least four years.

The company reported net income of 348 million yuan during the same period, a decline of 98.5%. Operating income fell 18.6% to 7.13 billion. Alibaba said its profit drop was primarily due to a net loss in its investment income.

Alibaba shares were down 4.4% in morning trading Friday on the New York Stock Exchange.

During the company's earnings call, Wu also proactively addressed investors' concerns over delisting risks, heightened this week by the U.S. Senate's unanimous passage of a bill that would delist Chinese companies that are not accessible to the Public Company Accounting Oversight Board's audits after a period of three years.

"We are closely monitoring the developments of this bill," Wu said.

Investors should know that there has been ongoing dialogue between regulators in both countries to allow more information to be passed on to the oversight board, she said.

"Alibaba's financial statements are prepared in accordance with U.S. GAAP," the accounting standard adopted by the U.S. Securities and Exchange Commission, and the company has been for over 20 years audited by global accounting firm PwC, Wu said in her bid to assuage investors.

"The integrity of Alibaba's financial statements speak for itself," the executive said. 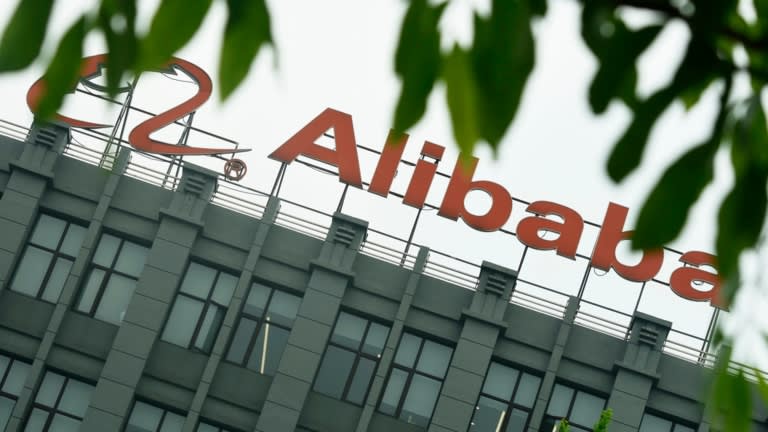 As the pandemic slashed stock valuations, Alibaba took a loss of 7.72 billion yuan on its investment portfolio.   © AP

Alibaba's first quarter of 2020 saw a weeks-long lockdown in China due to the coronavirus beginning from late January and slashed the value of investments in many affiliated public companies in which Alibaba holds shares. Most factories were shut down then and transportation was heavily disrupted.

This meant that even though Alibaba's core business of facilitating online consumer sales continued unimpeded, its ability to deliver on goods and services ordered was sometimes obstructed.

"For Alibaba, any business segment that has a physical touchpoint such as (online marketplace) Taobao.com, food delivery business Ele.me and logistics [arm] Cainiao Networks is expected to have had a flat [performance] compared with last year or most likely contract from last year," said Bloomberg Intelligence analyst Vey-Sern Ling ahead of the quarterly results.

Sales from Alibaba's commerce business grew 21% in the January-March quarter, versus 54% during the same period last year. Its local services business, led by food delivery unit Ele.me, reported quarterly revenue of 4.8 billion yuan, down 8%. Even the group's cloud computing business experienced a slowdown as engineers stranded at home could not help clients install and upgrade equipment.

Meanwhile, Alibaba also recorded a loss of 7.72 billion yuan from its investment and lending portfolio, compared with a gain of 18.67 billion a year earlier.

Alibaba's Wu sought to turn investors' attentions forward from the difficult quarter in a statement accompanying the results.

"Although the pandemic negatively impacted most of our domestic core commerce businesses starting in late January, we have seen a steady recovery since March," she said. The company projects generation of at least 650 billion yuan in revenue for the year to March 2021.

Chief Executive Daniel Zhang on the earnings call cited China's high savings rate as a pointer to the resilience of its consumption power.

"Over time, (the pandemic) has accelerated the structural shift from offline retail to online retail," Ling said, citing the fact that a growing number of Chinese families dabbled with e-commerce since the country's lockdown as they had no choice but to buy many goods online. In March, about 846 million smartphone users in China browsed on or purchased from Alibaba's e-commerce platforms, compared with 721 million people a year before.