HONG KONG -- A weekend announcement from China's central bank has raised questions about whether the authorities will go as far as seeking a breakup of Ant Group in a possible escalation of their crackdown on the Jack Ma-controlled online financial services conglomerate.

The People's Bank of China said Sunday that it had directed the company to rectify regulatory breaches in its operations and to overhaul its credit rating business to protect personal information. The news helped drive shares of Alibaba Group Holding, which owns a third of Ant, down 8% in Hong Kong trading on Monday.

Investors and analysts see the move by the Chinese central bank as a way to rein in Ant -- and as an answer to Ma for taking a swipe at financial regulators in a speech in October.

Ant began life as the digital-payments service Alipay in 2004, but over the years it has evolved from a tool for customers of Alibaba's shopping platforms into a virtual financial services mall in its own right. It connects its 730 million monthly users with banks, insurers and wealth managers to secure loans, insurance policies and financial investment products.

Ant's success lured heavyweight investors to the company, which had been poised in November to pull off the world's largest-ever initial public offering at a valuation of roughly $320 billion before authorities torpedoed the plan at the last minute, citing regulatory changes.

Here are five things to know about Ant's current problems:

What is Beijing requiring Ant to do?

Details are thin, but regulators are telling Ant to pull back from its higher margin credit, insurance and wealth management operations. They say Ant should set up a separate holding company to ensure capital adequacy and regulatory compliance. The company also will need to be a fully licensed financial institution to operate its personal credit business, be more transparent about its third-party payment transactions and not engage in unfair competition.

The changes will force the company to open itself to more scrutiny by the central bank and the banking regulator. It also will require Ant to hold more capital, set lending exposure limits for large customers, regularly report to regulators and boost its anti-money laundering controls.

After Ant was told by regulators. on Dec. 26 to come up with a schedule for revamping its business, the company said it would establish a special team to offer proposals and a timetable for an overhaul. It vowed to maintain business operations for its customers and to step up risk controls.

What will the impact be on Ant?

Any move by Ant to refocus back on payments will slow its growth rate and profitability. While Alipay, which has more than 1 billion users and a 55% share of China's $29 trillion digital payments market, would be left intact, it is the business that Ant derives from connecting its payments customers with a wide spectrum of financial services that would suffer.

Ant is China's biggest provider of online consumer loans, and its platform generates billions of yuan in sales from investment and insurance products.

Of that figure, the company's lending business contributed 39.4% and its wealth management business -- which includes the Yu'ebao platform for mutual funds and money market funds -- accounted for 15.6%. Its insurance unit brought in 8.4% of revenues. Ant's net profit margin was 30.2% -- twice the peak rate recorded in 2019 -- on overall earnings of 21.92 billion yuan ($3.35 billion).

"Growth in mainland China will slow as its payments business is saturated," said Shujin Chen, head of China financial research at Jefferies Financial Group in Hong Kong. "Ant can continue with its lending, insurance and wealth management businesses, (but) it will have to open up to greater regulation."

Analysts are not ruling out a spin off the holding company that houses the money-earning divisions into a separate entity. 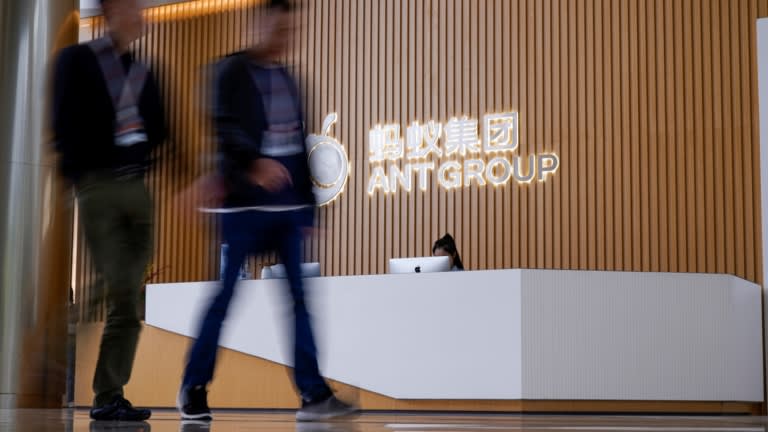 Analysts say it is too early to determine the listing path for Ant Group until the full impact of Beijing's new regulations becomes clear.   © Reuters

What does the future hold for Ant's IPO and valuation?

The latest edict deals a big blow to any chance of reviving the initial public offering in 2021. Investors, who had staked billions in the now-canceled dual listing in Shanghai and Hong Kong will be loath to put their money into play amid so much uncertainty. In addition, Ant will need regulatory approval to move ahead with its IPO plans.

Analysts say it is too early to determine the listing path for Ant until the full impact of the regulations becomes visible. They also say investors will have to seek clarity on which parts of the business will be listed and what their growth potential will be.

The $320 billion valuation that rivaled JPMorgan Chase at the time of the now-terminated IPO, which was expected to raise up to $39.6 billion, was premised on a 40% annual growth rate over the next decade. That certainly is not happening under the new rules.

"Ant's valuation will probably come down by 60% to 70%," said Joe Zhang, a veteran of several Chinese finance startups and a former investment banker. "Its payment business will be mostly intact, its lending platform will be far smaller. In three to five years' time, Ant will again grow rapidly, but in the interim, the pain is severe."

What other companies will be affected by the new regulations?

The moves are seen by some as a sign that regulators are stamping their authority on the entire $50 trillion financial services sector, especially fintech. Ant and competitors Tencent Holdings, which owns WeChat Pay and QQ Wallet, online retailer JD.com's JD Digits and Ping An Insurance Group's Lufax all have thrived under the previous light-touch regulation and have rewired the nation's financial industry.

That landscape has now completely changed as a part of regulators' efforts to limit risk. In response, Ant and the others have already removed listings for some bank-deposit products from their platforms and lowered credit limits for younger customers.

Their Hong Kong-listed shares have suffered under the new regulatory environment. Alibaba has been particularly hard hit by the Ant saga and its antimonopoly investigation. Last week, the State Administration for Market Regulation said that in response to complaints, it would investigate allegations that Alibaba required vendors to list products exclusively on its platforms.

Alibaba has slumped 20% so far this month. Tencent shares are down nearly 8%. JD.com slipped 2.2% on Monday to extend its December losses to 6%.

Why is China cracking down on the fintech sector now?

The rule changes are part of efforts by authorities to contain fallout from the debt buildup in the economy. Total debt across all sectors in China -- household, government, financial and nonfinancial companies -- rose from 302% of gross domestic product in 2019 to 318% in the first three months of 2020 -- the largest quarterly surge ever, according to the Institute of International Finance.

The organization, which counts 400 banks and financial institutions across the globe as members, predicts the ratio will reach a record 335% of GDP this year. Amid a strong economic recovery, authorities are restarting China's deleveraging drive, which began in 2016 but has been interrupted by the trade war with the U.S. and the impact of the coronavirus pandemic.

"The fundamental reason is the tussle between innovation and regulations," said Guoli Chen, professor of strategy at INSEAD in Singapore. "The government is playing a dedicated balance of innovation and risk. When it gets to financial system, it is extremely careful about systemic risk."