SHANGHAI -- Ant Group will reorganize much of its operations under the umbrella of a financial holding company for transparency at the behest of Chinese regulators, a source with knowledge of the situation told Nikkei.

Its loan intermediary business and sales of mutual funds and insurance would become subsidiaries of the holding company, with Ant, the fintech affiliate of Alibaba Group, as the parent. The restructuring would also cover MYbank, an online lender to small and midsize companies, and likely Tianhong Asset Management, operator of the Yu'ebao money market fund.

Authorities have requested that "all businesses requiring a financial license go under the holding company," the source said. Whether this includes Alipay -- a mobile payment platform with more than 1 billion users -- remains up in the air.

The source said Ant would follow any request from the authorities to take Alipay under its holdings umbrella.

Alipay, with its enormous customer base and vast array of services, could be a potent rival to the digital yuan being pushed by the Chinese government. Beijing may be tightening its scrutiny of Ant to narrow the competitive gap.

At the same time, regulators are moving aggressively to rein in financial risks. Among their targets is Xiang Hu Bao, a mutual aid platform from Ant aimed mostly at the small businesses and self-employed workers that make up the base of Alibaba's e-commerce service.

The platform offers basic health insurance covering conditions such as cancer and myocardial infarction, with benefits paid collectively by all participants. It has attracted around 100 million members since its October 2018 launch.

Authorities worry about its ability to reliably make future payments. The source told Nikkei that Ant has explained that because funds are not pooled, they are not at risk of being diverted or misused. But it is still considering splitting off the business, likely out of concern that the service would be much less efficient if authorities demand that it keep a capital cushion on par with that of conventional insurers. 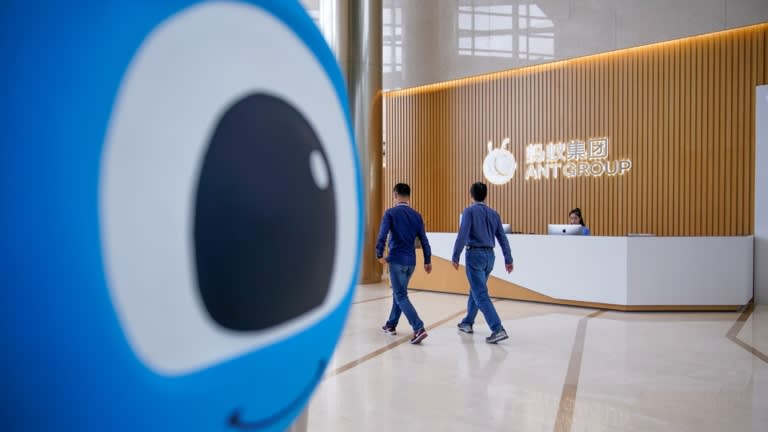 China is pushing for a digital yuan and likely regards Ant -- with its huge customer base -- as a rival.   © Reuters

Also under fire is Ant's loan intermediary business, an even bigger source of profit than its payment services. The company connects Alipay users to banks that can meet their funding needs, and collects fees in exchange.

Regulators say the fees are too high, as it feels Ant could take as much as 30% of interest income from loans it helped originate. Regional banks keen to increase their earnings have lent heavily through Ant, but they end up making little from these loans after the middleman's cut, setting the stage for future financial risks.

Ant has more than 2 trillion yuan ($310 billion) in outstanding credit balances through its smartphone platform.

Authorities are also concerned about costs being passed on to users. Ant has promised regulators it will not increase costs to customers for its service, the source who spoke to Nikkei said. It has already taken steps such as cutting credit limits for younger borrowers.

These moves will put a significant dent in the company's profitability. The source said there is still no clear time frame for Ant's planned initial public offering, which had been slated for last November before being halted at the last minute over regulatory concerns.

Once Ant goes public, it is expected to raise less than the originally anticipated $35 billion. But the source denied reports that the company has stepped back from startup investment, saying it has not received any such request from authorities.

Beijing seems to be cracking down on both Ant and Alibaba, with which it is affiliated. Jack Ma, founder of Alibaba and Ant's controlling shareholder, has irked many regulators with his outspoken criticism of China's financial system.

Authorities have launched an anti-monopoly investigation into Alibaba, and Ant executives were summoned for hearings at the People's Bank of China around the same time.

A statement released after the Central Economic Work Conference in December, a key economic planning meeting, said that "efforts will be made to intensify anti-monopoly supervision and prevent disorderly capital expansion." This may have hinted at tougher scrutiny of Ant, which controls more than half of the mobile payment market.

Amid all this, Ma himself has disappeared from the public eye, sparking a flurry of speculation. Jack Ma, founder of Alibaba and Ant's controlling shareholder, has disappeared from the public eye over the last two months.   © Reuters

Ma's last public appearance was in late October, when he delivered a speech in Shanghai. In private, he was last spotted in early December, singing a popular Chinese song at a Hangzhou bar part-owned by Ma and an Alibaba executive.

"He might have wanted to show that he was alive and well," said a company source who was there. Ma has not been seen since.