Beijing has big hopes for 5G, AI and more, but question is who will pay for it HONG KONG -- When Chinese Prime Minister Li Keqiang delivered his government's annual work report in Beijing recently, the so-called new infrastructure initiative was high up on the agenda. The phrase also cropped up when Huawei Technologies and Baidu talked about their business outlooks earlier this year. But what exactly is this initiative, which is expected to generate more than $2 trillion in investment over the next five years?

What is China's new infrastructure initiative?

The initiative is not entirely new -- the concept was unveiled in December 2018 when Beijing set "the development of new infrastructure such as artificial intelligence, industrial internet and the Internet of Things" as a government priority for the following year.

The initiative has received renewed attention recently. On March 4, President Xi Jinping told the Politburo Standing Committee, China's top policymaking panel, that Beijing will speed up investment in new infrastructure programs -- a sign the government is prioritizing this initiative in the post-coronavirus era.

Unlike conventional infrastructure projects such building roads and ports, the new infrastructure initiative is high tech-focused. Its three main areas of emphasis are: constructing next-generation information technology infrastructure such as 5G; upgrading and "smartening" existing infrastructure; and establishing incubators and frameworks to advance scientific research, tech development and product development.

How is this initiative different from "Made in China 2025"?

This is not the first time Beijing has expressed its desire to foster advanced technology. Made in China 2025, a national policy widely believed to have sparked tensions between Washington and Beijing, also prioritizes high-tech sectors ranging from 5G to robotics to aerospace.

The primary aim of that plan, however, is to reduce the country's reliance on imported components and strengthen its know-how in high-tech manufacturing. By requiring factories in China to purchase at least 70% of core components from local suppliers by 2025, Beijing in effect created demand for made-in-China chips, sensors and many other tech products.

The new infrastructure initiative, on the other hand, focuses on the deployment of high-tech products, without specifying where the technology should come from. Indeed, to lure more participants, Chinese policymakers have said they will consider opening up some state-controlled sectors to private firms.

Beijing's new infrastructure push comes as the Chinese economy -- already suffering from the U.S.-China trade war -- has taken another hit from the coronavirus pandemic. The world's No. 2 economy shrank 6.8% in the first quarter of this year, the first decline since 1992. The International Monetary Fund in April forecast China's GDP will grow just 1.2% this year, down sharply from the 6% growth it estimated in January before the COVID-19 outbreak.

"China's top priority is to 'stabilize the economy and stabilize the growth' following the economic and social impacts of the coronavirus. At times like this, infrastructure projects are the quickest way to lead domestic investments and create jobs," said Kelly Hsieh, an analyst at research house TrendForce who monitors China's 5G infrastructure.

A report released in March by the government-backed think tank CCID Group estimates that the rollout of 5G networks, data centers and other high-tech infrastructure would result in an investment of at least 17 trillion yuan by 2025. The new initiative is also expected to provide more skilled jobs in a country where the urban unemployment rate climbed to 6% in April -- the second-worst since Beijing began reporting monthly figures in 2018.

"It aligns with China's transition to a high-tech, innovation, and consumption-driven economy, rather than resorting to an old playbook of large government-led investment stimulus," said Bruce Pang, an economist with China Renaissance Securities, in a recent research note.

Who are the key players?

A large number of companies -- both in China and abroad -- are expected to benefit from this initiative. The CSI New Infrastructure Theme Index, which covers 100 Chinese stocks related to the new infrastructure rollout, is up about 32% since its debut in March.

Highflying startups such as SenseTime and privately owned conglomerates like Huawei have already taken part in this multibillion-dollar program.

As the world's biggest telecom equipment maker, Huawei is particularly well-positioned to participate. It already provides more of the gear for China's 5G network than any other company, and this year it established a new business group to expand its cloud computing, big data analysis, server and data storage offerings.

"We aim to help our state enterprises to grab opportunities created by new infrastructure development," Deng Tao, the president of Huawei Cloud Global Market, said at a conference earlier this month.

Internet companies are also getting in on the action. Tencent Holdings, operator of the hugely popular messaging app WeChat, said earlier this week that it will invest 400 billion yuan over the next five years to build data centers, advance edge computing and engage in other forms of new infrastructure development. Its great rival Alibaba Group Holding made a similar announcement in April.

How will China pay for this plan, and what are the potential pitfalls?

It is unclear at this point who will foot the bill for this ambitious plan.

"We are still waiting for the details on how to deploy the fiscal firepower," said Aidan Yao, senior emerging Asia economist at AXA Investment Managers, on Tuesday.

China does not have any obvious debt problem at the central government level, so it would probably not be a serious problem even if the annual fiscal deficit to rose to 3.6% of GDP, as laid out by Premier Li Keqiang on May 22, which is deemed to be manageable.

The problem could lie with local governments -- Li has promised that the central government will allot 2 trillion yuan ($279 billion), the sum of net increase in fiscal deficit and special bond issuance, to local governments. And it is not yet known how this money is going to be spent.

"There [is] no such thing as a free lunch," she said. "The mirror of additional stimulus is more leverage." 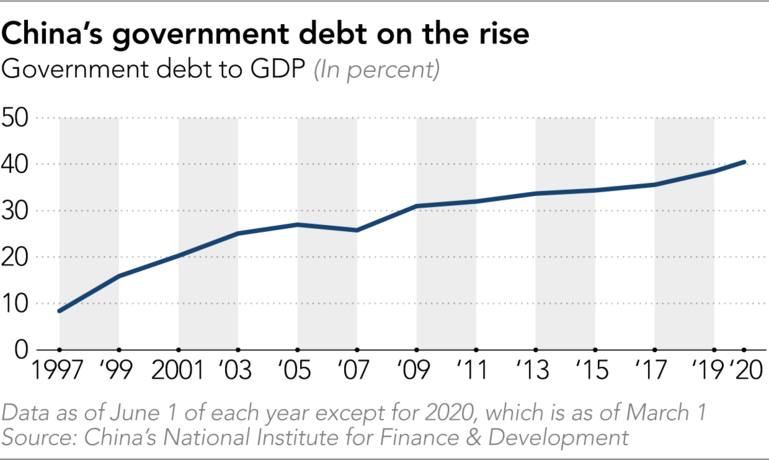 These off-budget debt vehicles serve as a kind of second purse for local governments to fund various projects. But due to lack of proper oversight, public disclosure and accountability, LGFVs have been a core part of China's debt problem.

"Their operations are accelerating because they play outsized roles in helping spark economic momentum as China begins to normalize following the COVID-19 lockdown," Gloria Lu, a credit analyst at S&P Global Ratings, pointed out in her recent report. "LGFVs are also back in the domestic bond markets, raising record-high funds."

The capacity of individual LGFVs, she continued, can vary widely. "Some lower-tier governments face deteriorating fiscal positions," she said, which could become an issue down the road.

Another potential issue is with the infrastructure initiative itself.

"Several actors are pushing to use this opportunity to further enhance China's digital infrastructure. While clearly welcome, this strategy might not spur the necessary job creation needed to sustain employment and disposable income," said Herrero at Natixis. "Chinese leaders might, therefore, be tempted to give up on such high hopes and use the stimulus for more labor-intensive sectors, such as infrastructure and real estate." This, in turn, could lead to unnecessary and underutilized infrastructure, prolong the "lives" of zombie companies and pile up more bad debt.