Rapid expansion of China's state-backed display makers could spark a brutal price war, hitting the margins and market share of existing leaders, as happened in the LCD market, say analysts.

"This year is an important year for Chinese display makers considering the massive new OLED capacity from them," Eric Chiou, a veteran tech analyst at WitsView, told the Nikkei Asian Review.

"We foresee they will start to have significant impact on South Korean players, especially to affect Samsung Display's dominance from the first half of 2020 at the earliest," Chiou said.

Flexible OLEDs are essential for curved-corner smartphones, now the industry's mainstream design. They are also required for foldable phones, an innovation seen as key to reviving growth in a slowing smartphone market.

BOE, which became the first Chinese company to produce flexible OLEDs for smartphones in 2017, plans to have an additional capacity of 45,000 panels per month by the end of this year. Its total capacity will rise to around 90,000 OLED panels, according to Taipei-based research company WitsView, citing supply chain checks. Visionox, whose displays are seen here at the recent China Information Technology Expo, is one of a crop of state-backed Chinese makers of flexible OLED panels. (Photo by Lauly Li)

On a monthly basis, the flexible OLED display capacity of BOE alone for smartphones will exceed second-ranked LG Display's 60,000 panels and narrow the gap with top player Samsung Display's 165,000 panels this year.

Even without the bendable feature, the better contrast and higher brightness of OLEDs makes them a top choice for premium models, such as the iPhone Xs series, Huawei's Mate series and Samsung Electronics' flagship Note and S series.

The OLED supply has for years been led by Samsung Display, an arm of the South Korean device maker, owing to high technology and investment barriers to newcomers. Building up the necessary capacity requires tens of billions of dollars in capital spending.

But the playing field is changing as China's government-backed display makers, including BOE, CSOT, Visionox and Tianma Microelectronics, gain ground in terms of technology and capacity.

"The flexible OLED will become the mainstream display technology," Li Dongsheng, chairman and CEO of leading Chinese television market TCL, said in a keynote speech at the China Information Technology Expo in Shenzhen on April 9. "China will accelerate technology development to be the world-class leader in the next few years," added Li.

State-backed TCL is the parent company of CSOT.

CSOT's first sixth-generation flexible OLED plant in the Chinese city of Wuhan is scheduled to begin mass production in May. The initial production line is set for 15,000 panels per month, with a second line to start operation in the first quarter of next year, the company told Nikkei. Tianma and Visionox Technology, meanwhile, will have new OLED capacity of 15,000 and 25,000 panels per month, respectively, when they begin mass production later this year.

Tone Wu, Tianma's deputy director for marketing, acknowledges that the foldable smartphone market is in its infancy, and that high retail prices and manufacturing costs deter both consumers and producers. "However, we [Chinese display makers] are betting on flexible OLEDs as we believe it will be the future mainstream spec for smartphones and we need to secure our market positions as soon as possible," Wu told Nikkei. 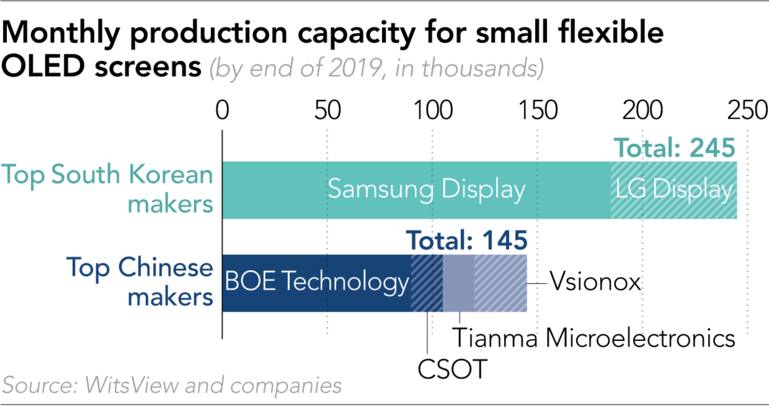 "With the government's support and Chinese smartphone companies' desire to foray into foldable phones, this is the right track to invest on [flexible OLED] and we are in the leading group with South Korean peers," Wu said.

However, South Korean display makers remain far ahead in terms of quality, meaning it will take time for Chinese companies to catch up despite their ambitious capacity expansions.

WitsView's Chiou said BOE currently is lagging behind Samsung Display and LG Display, but Huawei's choice of the Chinese company's flexible OLEDs for the Mate X gives BOE an opportunity to hone its production quality and stability.

If BOE's OLEDs receive Apple's approval, the Chinese company could start supplying the flexible display for iPhones as early as next year, which would make it the third supplier following the two South Korean display makers, industry watchers said.

"Chinese display panel makers' aggressive speed to catch up is something that Apple, Huawei and other smartphone players with their eye on foldable smartphones cannot ignore," Chiou said.

But there is one more potential risk for China's display makers. Washington and Beijing are in the midst of working out an agreement to resolve their trade tensions, which would include addressing structural issues such as market-distorting subsidies. Such an agreement could impact the ability of heavily subsidized Chinese display makers to continue investing billions in cutting-edge technology.

“It is indeed possible that Chinese display technology development and capacity expansion would slow down, as Washington aims to crackdown intellectual property theft and market-distorting activities through a trade agreement with Beijing," Chiu Shih-fang, a tech supply chain analyst at Taiwan Institute of Economic Research, told Nikkei.