HONG KONG/TAIPEI -- Chinese chip designers, whose business has flourished under Beijing's desire for a homegrown semiconductor industry, are warning it will be impossible to meet national targets for a viable, independent sector without access to U.S. technology.

"There are alternatives in China, but the gap in technology is too big," said an executive from one of China's leading artificial intelligence chipmakers, which relies on U.S. technology for chip design. "If we lose access to U.S. software or can no longer receive updates, our chip development will run into a dead end."

A senior executive from Shanghai-based NextVPU, an AI chipmaker founded by former Advanced Micro Devices engineers, echoed his concerns. "Without updates from American software providers, China's push to develop its own chips will hit a wall," he told the Nikkei Asian Review.

The executives, like others quoted in this article, spoke on the condition of anonymity due to fears of upsetting Beijing, which has set a target for 70% of all chips used by Chinese industry in 2025 to be domestically produced.

But their views were backed up by industry experts and suppliers.

"We would use whatever chip equipment and materials we have locally if their performances were good enough," said a manager from Semiconductor Manufacturing International Co., China's top contract chipmaker. "But we still need [American] equipment, materials, IPs and chip design software. It's not likely for any of the chipmakers in the world... to get rid of American vendors soon." 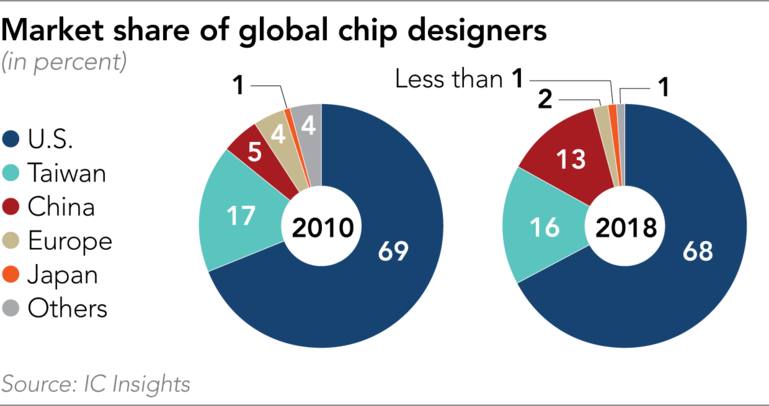 Cici Zhang, an analyst with Taipei-based research firm TrendForce, was similarly cautious. "The overall self-sufficiency rate in China's chip design sector was 15% in 2018," Zhang said. "It will still take time for China to quickly replace a lot of global semiconductor players as the world's supply chain is so interconnected."

The government has been locked in a bitter battle with Washington over the future of its tech sector after the U.S. moved to restrict the transfer of American technology. In May it barred sales of goods containing 25% American technology to Chinese tech giant Huawei Technologies. This weekend Washington broadened its assault on the country's tech industry, adding five more Chinese entities -- including supercomputer manufacturer Sugon and two Chinese joint ventures with American semiconductor company AMD -- to its export blacklist.

The moves come as the government pushes Chinese industry to buy homegrown semiconductors in order to meet its goal of sourcing 40% of all supply domestically by 2020 and 70% by 2025. However, industry executives say this goal is out of reach, while many Chinese companies are also proving reluctant to switch to locally sourced semiconductors.

"To be honest, Chinese chips are still less efficient than Intel's," said a senior sales director from Inspur, the world's third-largest server maker and the No. 1 in China. Companies handling the most sensitive processes, such as financial transactions, are also reluctant to trust China's nascent chip industry.

"Our clients are banks, and having a stable system is their top priority," said an executive from Siecom, a Shenzhen-based software developer specializing in producing telecommunication terminals for Chinese banks. "Even if Huawei's chips function as well as Qualcomm chips, we feel Qualcomm is a safer bet because of its decades-long experience in chip making."

Chip production in China -- including by foreign companies -- accounted for just 15% of the country's $155 billion market last year, according to IC Insights. The market research group is forecasting in-country production of just 20.5% by 2023.

China's 2025 ambitions have already been hampered by the U.S. crackdown.

AMD has limited knowledge sharing with its Chinese joint venture partner, Tianjin Haiguang, in light of the moves and said it was "reviewing the specifics of the order to determine the next steps related to our joint ventures ... in China."

"The push for [China's] self-reliance is not delivering results as quickly as expected and has really been hit by the U.S. clampdown," said Arisa Liu, a veteran chip analyst at the Taiwan Institute of Economic Research.

The chilled tech partnership has also weighed on Chinese chip designers' growing momentum, analysts say. Revenue from the sector is expected to grow 17.9% this year to roughly 296.5 billion yuan ($42.9 billion), the first time the rate has fallen below 20% since 2014, when Beijing introduced a multibillion-dollar fund to ramp up its semiconductor prowess, according to TrendForce.

Moreover, for high-end chips that are used for data centers and other sophisticated applications, Chinese companies still favor imported chips over domestic products. Not only do Chinese chips lag in performance but they cost significantly more -- sometimes as much as 50% more due to their limited production scale, said the executive of the leading AI chipmaker. This hesitation to use domestic chips made it difficult for Chinese developers to improve their technology. "Small companies cannot absorb those [cost] differences," the executive said. "But deployment is vital for technology improvements. We can only know how our chip performs if someone is using it."

At an industry conference earlier this year in Shenzhen, Jiang Yijie, an executive of Shanghai-based chipmaker Montage LZ, said: "What Chinese chipmakers lack is not market potential but market confidence."

The Chinese government is trying to set an example. In June last year, the Central Government Procurement Center for the first time included Chinese-made chips in its purchase list. Inspur has begun using homegrown chips for government and military projects. "The government's action to adopt more Chinese chips is a positive demonstration to support homegrown efforts," said the Inspur sales director.

Michael Guo, a sales director at Zhejiang Shijing Sensor Technology, which produces chips for carmakers, also counts on Beijing for help. "If the government encourages the use of made-in-China chips in public procurements, companies will buy more," he said.

But even with much-anticipated support from Chinese leaders, Guo is still cautious about whether Beijing will meet its ambitious 2025 targets. "China's chip industry is on the rise, but it still lags far behind Western peers," he said. "It will probably take us another decade to catch up."