SHENZHEN -- Aug. 26 marks the 40th anniversary of the designation of Shenzhen in the southern Chinese province of Guangdong as a special economic zone.

As a testing ground for market-oriented reforms, Shenzhen has led the Chinese economy and seen its own economic size balloon a staggering 10,000-fold in the past four decades.

The city has also produced many influential private companies, including telecoms equipment giant Huawei. But it is now facing unprecedented headwinds due to economic and political confrontation between the U.S. and China as well as issues surrounding Hong Kong. Workers check the quality of TVs at a plant in Shenzhen in 1982.   © Xinhua/AP

China's then leader Deng Xiaoping introduced a policy of reform in 1978 to bolster the country's economy devastated by the Cultural Revolution launched by Mao Zedong in 1966. The policy was aimed at reviewing the emphasis on socialist-style economic planning and leaving the movement of people and money up to the market.

To attract foreign companies, the first four special economic zones, or SEZs, were created in 1980 and 1981 in Shenzhen, Zhuhai, and Shantou, all in Guangdong Province, and Xiamen in Fujian province.

Shenzhen was once a lonely fishing village, but began to develop rapidly after being designated for special treatment. It grew at an accelerated pace through improved infrastructure, such as water, sewage and roads, and wielding funds raised by actively lending sites for industrial development to companies.

Shenzhen's gross domestic product totaled 2.7 trillion yuan (about 40 trillion yen) in 2019, the third-biggest in China after Shanghai and Beijing.

In terms of GDP growth between 1980 and 2019, Shenzhen far exceeds Zhuhai and Xiamen, let alone the entire nation.

Loose regulations have served as a catalyst for Shenzhen's astonishing growth.

The reduction and exemption of import tariffs and corporate taxes resulted in many manufacturing companies, including foreign-owned ones, building plants in the city.

Furthermore, the sale of the right to use state-owned land to the private sector at auction and the bankruptcy of companies were implemented in the city earlier than anywhere else in the country.

Shenzhen thus became a model city for the policy of "reform and opening-up."

"The secret of Shenzhen's growth is that the government did not interfere in the private economy," said a researcher at the State Council, China's cabinet. A bank employee who has worked in both Beijing and Shenzhen said, "Regulatory authorities in Beijing always told us to follow the rules and regulations anyway, but bureaucrats in Shenzhen first asked us whether we had any trouble."

The fact that Shenzhen is adjacent to Hong Kong also contributed to its growth.

Foreign-owned electronics manufacturers and other companies seeking cheaper labor set up operations in Shenzhen via Hong Kong. As a result, Shenzhen has become an industrial center for processing trade.

And with a history of just 40 years, Shenzhen is also attractive as a new "immigrant city" made up of people from all over China. Workers who came to the city to find jobs at local factories and their children subsequently contributed to the growth of telecom and internet companies.

Although Shenzhen has become a major Chinese city, conditions for obtaining a family register there are easier than in Beijing and Shanghai. With young people flocking to Shenzhen, the average age of residents is 32, lower than China's median age of 38. 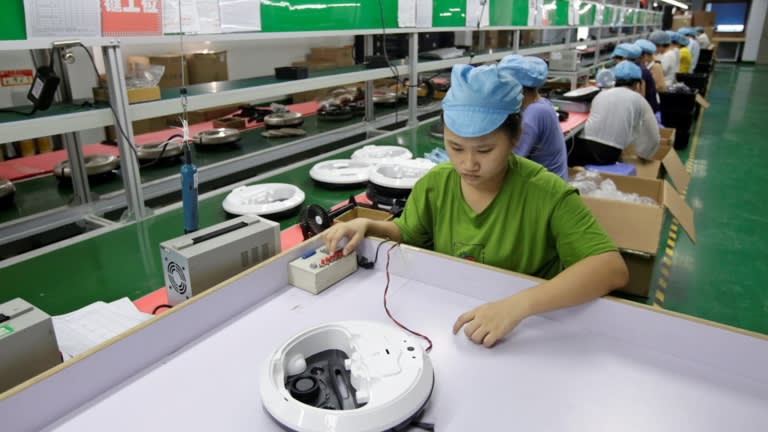 Robotic vacuum cleaners are assembled at a factory in Shenzhen on Aug. 9, 2019.   © Reuters

Many global companies were born in Shenzhen. One is Huawei Technologies, the world's largest manufacturer of telecom base stations with a global market share of more than 30%. It became the biggest shipper of smartphones in the April-June quarter.

Others include Tencent Holdings, aggressively investing in video game developers, including U.S.-based Epic Games, which is known as the developer of Fortnite, and fintech companies. SZ DJI Technology, a world-leading manufacturer of commercial unmanned aerial vehicles, or drones, is chalking up large profits in the U.S., Japan and other developed countries. Chinese President Hu Jintao attends a ceremony to commemorate the 30th anniversary of the Shenzhen Special Economic Zone in 2010.   © Reuters

But because of the presence of global companies Shenzhen is more seriously affected by U.S.-China friction. The administration of U.S. President Donald Trump has imposed a government-wide ban on contractors using Huawei products and is also urging Washington's allies to reject the Chinese tech giant.

The Trump administration is also working to cut back on the supply to Huawei of semiconductors and software using American technologies. It is expected to slap a ban on Tencent's WeChat messaging app, which has 19 million users in the U.S.

The enforcement of a new national security law in Hong Kong is also adversely affecting Shenzhen, which has benefited greatly from the role of the neighboring city -- a former British colony -- as a key gateway to mainland China under the formula of "one country, two systems." With the law expected to weaken Hong Kong's competitiveness, Shenzhen will likely suffer a considerable impact if the inflow of capital and people from next door slows.

A sense of crisis is growing among Shenzhen officials as soaring labor expenses and a real estate bubble have already made the city less attractive to manufacturers planning to build new plants.

Shenzhen established base stations for 5G mobile phones across its cityscape in mid-August ahead of other places in China. In July, the municipal government announced a plan to spend public and private funds totaling 411.9 billion yuan by 2025 to build infrastructure, such as a high-speed telecom network and a data center, to vitalize the IT and manufacturing industries.

To commemorate the establishment of the Shenzhen SEZ, it has been a matter of convention for Chinese presidents to visit the city to mark major commemorations. Jiang Zemin and Hu Jintao, for example, attended ceremonies marking its 20th and 30th anniversaries, respectively, though after the actual date.

With the situation in Hong Kong growing strained, attention is increasingly focused on when President Xi Jinping will visit Shenzhen and what he will say in his message for the 40th anniversary.