HONG KONG -- Dida Chuxing has jumped ahead of rival Didi Chuxing to apply for what looks to be Asia's first initial public offering out of the ride-hailing sector.

Analysts expect Dida's move to spur other ride-sharing companies to list, as competition for market share and funding intensifies in the region. U.S. market leaders Uber and Lyft each held IPOs last year.

"My feeling is most ride-hailing companies are preparing for an IPO," said Feng Linyan, an analyst at Beijing-based research company EqualOcean, adding that startups in the sector have grown to the point where investors start to look for returns.

Hong Kong and mainland China are expected to be the main listing destinations for Chinese players given strained political ties between Washington and Beijing, she said.

While Didi has repeatedly been reported to be seeking an IPO in Hong Kong, a company spokeswoman told Nikkei Asia on Friday that she is not aware of any offering plan.

Asked about his own IPO plans, Wei Dong, chief executive of state-backed ride-sharing company Shouqi Limousine & Chauffeur, told Nikkei that his company will prioritize straightening out its fundamentals in the post-COVID-19 era,

Dida, founded in 2014 by five internet industry veterans including former Google China executives, has long been under the shadow of Didi Chuxing, which claims more than 80% of China's ride-hailing market.

But Dida and players including Hellobike, backed by Alibaba Group Holding, have managed to chip away at some of Didi's market share following the separate deaths of two users of the company's Hitch carpooling service in 2018. The service was suspended for 15 months after the second incident.

Carpooling, which allows strangers to split ride bills, is an even bigger part of Dida's business, alongside taxi-hailing. Dida offers carpool rides in 366 Chinese cities and held a two-thirds market share in 2019, according to its prospectus, which was filed to the Hong Kong Stock Exchange on Friday. 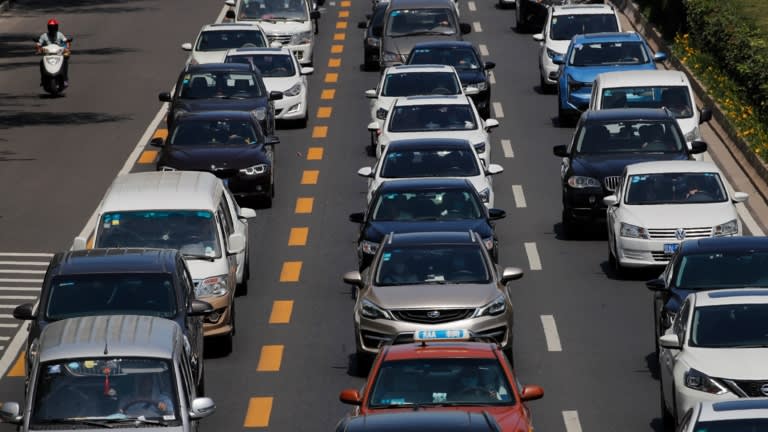 A traffic-choked road in Beijing. In the first three months of this year, carpooling rides through Dida declined more than 60%, to 21.5 million, from the previous quarter.     © AP

The lower fees charged for carpooling rides has drawn users who in turn helped Dida to turn a profit quicker than its competitors. The company posted a net profit of 172.4 million yuan ($25.4 million) in 2019 and earnings of 150.8 million yuan in the first six months of 2020, with a net profit margin of 29.7% and 48.6% for the two periods, respectively.

However, Dida is facing growing challenges. Didi has expanded Hitch to more than 300 cities since relaunching the service nearly a year ago and launched Huaxiaozhu, a lower-cost ride-hailing brand, earlier this year to target younger passengers.

Carpooling operators in China have been subject to tighter regulations since the government moved to strengthen passengers' safety after the Didi deaths. Dida has received 77 administrative penalties related to its carpooling services, resulting in fines totaling 2 million yuan, according to its prospectus.

Uncertainties related to the coronavirus pandemic are casting a shadow over Dida's future, however. In the first three months of this year, the number of carpooling rides it arranged fell more than 60% from the previous quarter to 21.5 million. While its ride count rebounded to 37.8 million in the March-June quarter, that was still 30% below the level seen at the end of last year.

Dida has hired Haitong International and Nomura as joint sponsors for the offering.