Pinduoduo's $200m investment in Gome heats up competition with Taobao and JD.com 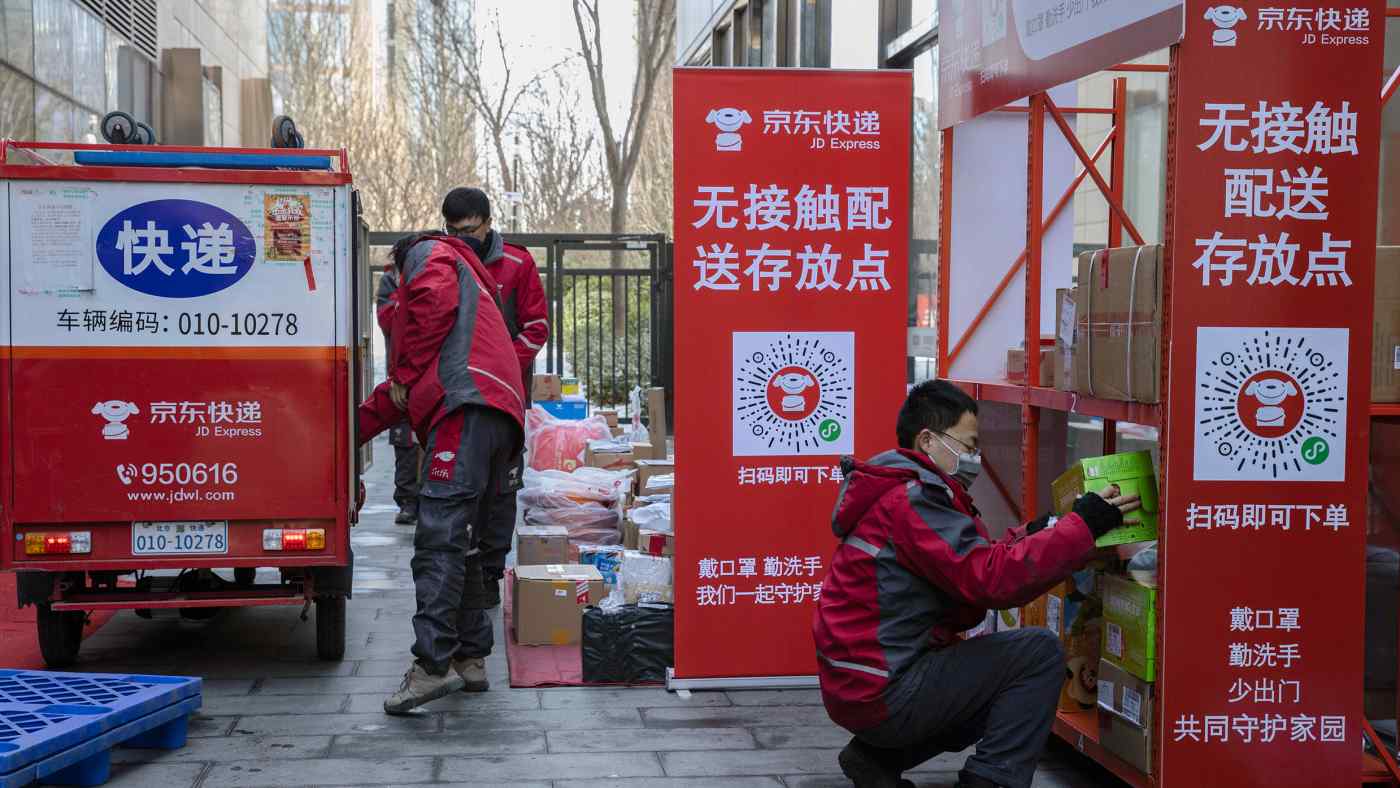 SHANGHAI -- As China tries to ramp up domestic consumption amid an economic downturn the country's e-commerce operators are working more closely with consumer goods manufacturers, aiming to make it easier for shoppers to have a say in the development of the products they buy.

Pinduoduo recently made a maiden investment in a home-appliance retailer in a move the Chinese e-commerce player says will deepen its collaboration with manufacturers to better serve customers' needs, while rivals including Alibaba Group Holding-backed Taobao and JD.com have launched mobile apps aimed at similar initiatives.

The companies collect their customers' online preferences and get feedback, which they pass along to the factories that produce household appliances and other items.

These companies use that vast amount of consumer data to keep their suppliers updated on market sentiment and users' demands, with the hope that factories will make products that shoppers want. Adjusting to meet shoppers' needs would, in turn, help drive down costs for both producers and consumers.

Connecting consumers directly to producers on e-commerce could greatly influence the transformation of factories, according to iResearch Consulting Group, a Chinese market research and consulting firm. "The platform model helps manufacturers to build their own brands, create flexible production lines and gain a competitive advantage in transformation and upgrade of the manufacturing industry," it said in a report last year. Gross merchandise volume handled by China's e-commerce market with factory-supported data was valued at 17.5 billion yuan ($2.5 billion) in 2018, according to iResearch. The firm estimates that the market will grow at a compound annual rate of 24% to 42 billion yuan by 2022, an expansion that will be supported by new users rather than existing individual customers.

That could give a much-needed boost to China's economy, which reported its first quarterly contraction in gross domestic product in nearly four decades in the January-to-March period, as companies were forced to shutter for weeks in an effort to combat the coronavirus.

The government in Beijing, juggling with preventing the outbreak from spreading and lifting work restrictions, has now turned its focus to supporting domestic businesses, particularly small and medium-size enterprises.

The investment, which translates into 5.6% of Gome's shares, allows Pinduoduo to tap into product ranges that include popular electronics brands such as Haier, Midea, Toshiba and Siemens, offering them at the same price or lower than Gome, Pinduoduo says.

Known for its market leadership in China's lower-tier cities, Shanghai-based and Nasdaq-listed Pinduoduo has been trying to shed its public image of selling low-price and low-quality home appliances.

The partnership with Gome could help Pinduoduo overcome that negative perception and lift its market share in higher-tier cities, such as Beijing and Shanghai, which are dominated by such rivals as Taobao and JD.com. 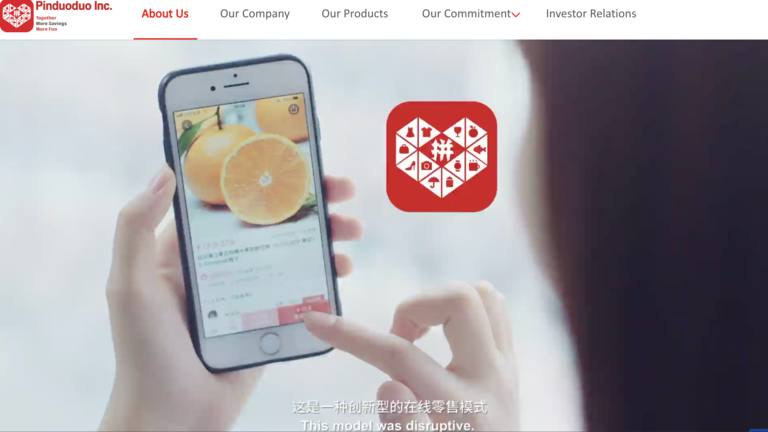 The Pinduoduo app. Analysts say that the company's new partnership with Gome could help it to fend off competition, in addition to improving its image as a low-quality marketplace. (Screenshot from Pinduoduo's website)

Pinduoduo, Taobao and JD.com appear to be going after each other's marketplaces, adopting similar features, such as group purchasing and livestreaming on mobile apps.

With social group e-commerce, buyers can tag contacts in their mobile phone or anonymous buyers that appear on the app to generate group purchases for better offers, while sales pitches of selected household products are held through livestreaming. Proponents of these marketing measures say that they can generate impulse buying -- a crucial element in the retail sales sector.

More important, it gives Pinduoduo access to a wider supply chain to tailor-make products to its customers' liking. The company has pioneered the customer-to-manufacturer business model, which directs consumer feedback to factories in real-time, tightening the supply chain by bypassing middlemen.

"Pinduoduo has 585 million users, and from their browsing, purchasing and sharing behavior, we have in-depth understanding of our users' needs and preferences," a Pinduoduo spokesperson said.

An earlier partnership with a brand called Jiaweishi has sold more than 800,000 robot vacuum cleaners at 300 yuan ($42) since the product was first introduced. A similar foreign brand sells for five times that amount.

"By producing what consumers want, how they want it and when they want it, manufacturers are able to cut costs by reducing mismatches in demand, and better plan their inventory and logistics," Pinduoduo said.

"The quality is not too bad compared with others," said Wang Xiaohua, a Pinduoduo app user in the city of Fuyang in eastern Anhui Province. Wang, a travel agency employee, shops for household products four to five times a month.

The partnership with Beijing-based Gome is Pinduoduo's first strategic investment since it was founded in 2015. A previous sales promotion from the two companies featured more than 6,000 items across 10 product categories from various manufacturers and brands that included household electronics, computers, beauty and cosmetics, and general merchandise.

Workers for JD.com at a distribution center in Beijing. JD.com has reached out to toy producers in Guangdong Province, hoping to offer more "direct-from-factories goods" on its mobile app called Jingxi.   © AP

Analysts say that Pinduoduo's partnership with Gome could allow it to fend off such competition, in addition to improving its image as a low-quality marketplace.

"It is crucial for Pinduoduo to react according [to the recent initiatives by Taobao and JD.com]," said Teresa Lam of Fung Business Intelligence in Hong Kong. "Gome provides a fast route for Pinduoduo to [get] access to more consumer data, especially in the home appliances sector."

Pinduoduo is not alone in its latest effort to better address consumers' spending habits.

Last month, Taobao launched a new mobile app called Taobao Tejiaban, or "special offer edition" in Chinese, which it hopes will generate 10 billion new orders annually with Chinese manufacturers over the next three years. Taobao, which boasts China's largest e-commerce marketplace with 711 million users, says the initiative will help manufacturers lagging in the digital race to catch up.

JD.com, too, has recently reached out to toy producers in an industrial zone in the city of Shantou in southern Guangdong Province, hoping to offer more "direct-from-factories goods" on its mobile app called Jingxi. JD.com says it hopes to duplicate that model in other cities. It is targeting one million producers in 1,000 industrial zones around the country.

"By creating new supply, expanding domestic demand and transforming trade, we will foster drivers of the Chinese economy and promote sustainable development of the industrial belt," said Han Rui, vice-president of JD.com.

While such moves may not translate into near-term profitability, Chinese internet companies are leveraging their strong technology and supply-chain management capabilities, as well as their large user bases, to help the government combat the coronavirus, Moody's Investors Service said in a recent report.

"These efforts are credit positive for the companies in the long term because we expect they will enhance their already strong market positions and competitive advantages, primarily through higher user stickiness," it said.