Regulations come amid fewer titles and challenges over its restructuring plan

The regulations, introduced this week by the State Administration of Press and Publications following Beijing's call to curb excessive gaming, caps the amount minors can spend on gaming for the first time.

While reduced sales from minors will not send a lethal blow to Tencent, "the company will certainly feel the pain in its revenue," said Cui Chenyu, a senior analyst at global consultancy IHS Markit in Shanghai. Tencent will report third-quarter earnings on Wednesday.

Players ages 16 to 18 are now restricted to spending a maximum of 400 yuan ($57) a month on video games. In addition, playing time is limited to 90 minutes a day, or three hours a day during holidays. Minors from the ages of 8 to 15 have a limit of 200 yuan a month, and those under 8 are essentially banned from spending on games.

The new rules require players to register online with their real identities, although additional details, including enforcement, are unclear.

Online gaming contributed nearly 31% of Tencent's revenue in the April-June quarter. The Hong Kong-listed internet giant is one of Asia's most valuable public companies by market cap. 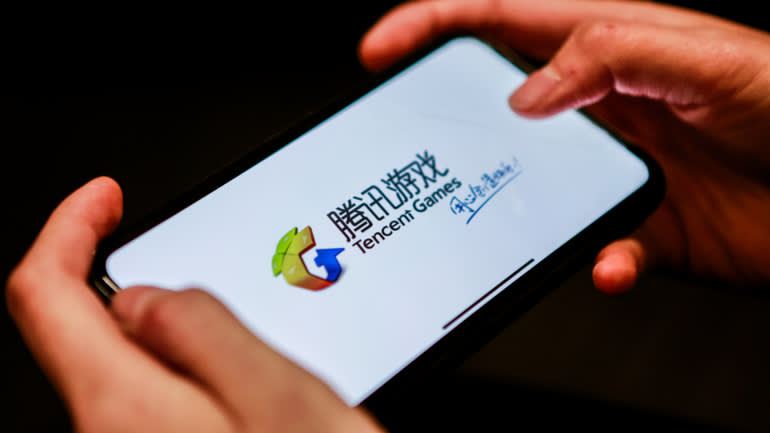 Tencent in recent years has faced criticism for producing video games with violent content amid allegations that children were becoming addicted.   © Reuters

The new rules come as Tencent, like many other gaming companies in China, finds it increasingly challenging to attract new players.

The number of gamers in the country rose just 5.9% in the first half of 2019 to roughly 640 million, according to Beijing-based research company CNG and the country's official gaming association. While that figure is higher than the 4% increase during the same period a year earlier, it continued a trend of sluggish growth that began after 2015, the last year that the number of gamers in China expanded at a double-digit rate.

The country's No. 1 game publisher also has fewer new game titles on offer. Although Chinese authorities resumed issuing gaming licenses in December after a monthslong government policy overhaul, Cui said that Tencent has received approvals for as few as "half or one-third" of what it used to due to Chinese censors imposing stricter oversight on content.

Tencent in recent years has faced criticism for producing video games with violent content amid allegations that children were becoming addicted. People's Daily, the Chinese Communist Party's mouthpiece, in 2017 went so far as to call Tencent's online blockbuster Honour of Kings a "poison."

Tencent did not respond to Nikkei Asian Review's request for comment, but company executives apparently have been aware of potential risks.

"Tencent's mission is to become a digital assistant of all industries," Martin Lau, the company's president, said in a statement in September 2018, when Tencent announced its first business restructuring in six years.

But finding an alternative to gaming presents challenges. Cloud computing, which was highlighted as one of the new initiatives in Tencent's business restructuring plan, has continued to spill red ink despite increased revenues.

Tencent's revenue for this year's April-June quarter was 88.8 billion yuan, a 21% increase from a year earlier, but below the consensus estimate of 93.4 billion yuan from analysts polled by data provider Refinitiv.

Analysts expect Tencent to post net income of 24.4 billion yuan for the July-September quarter, according to Refinitiv.