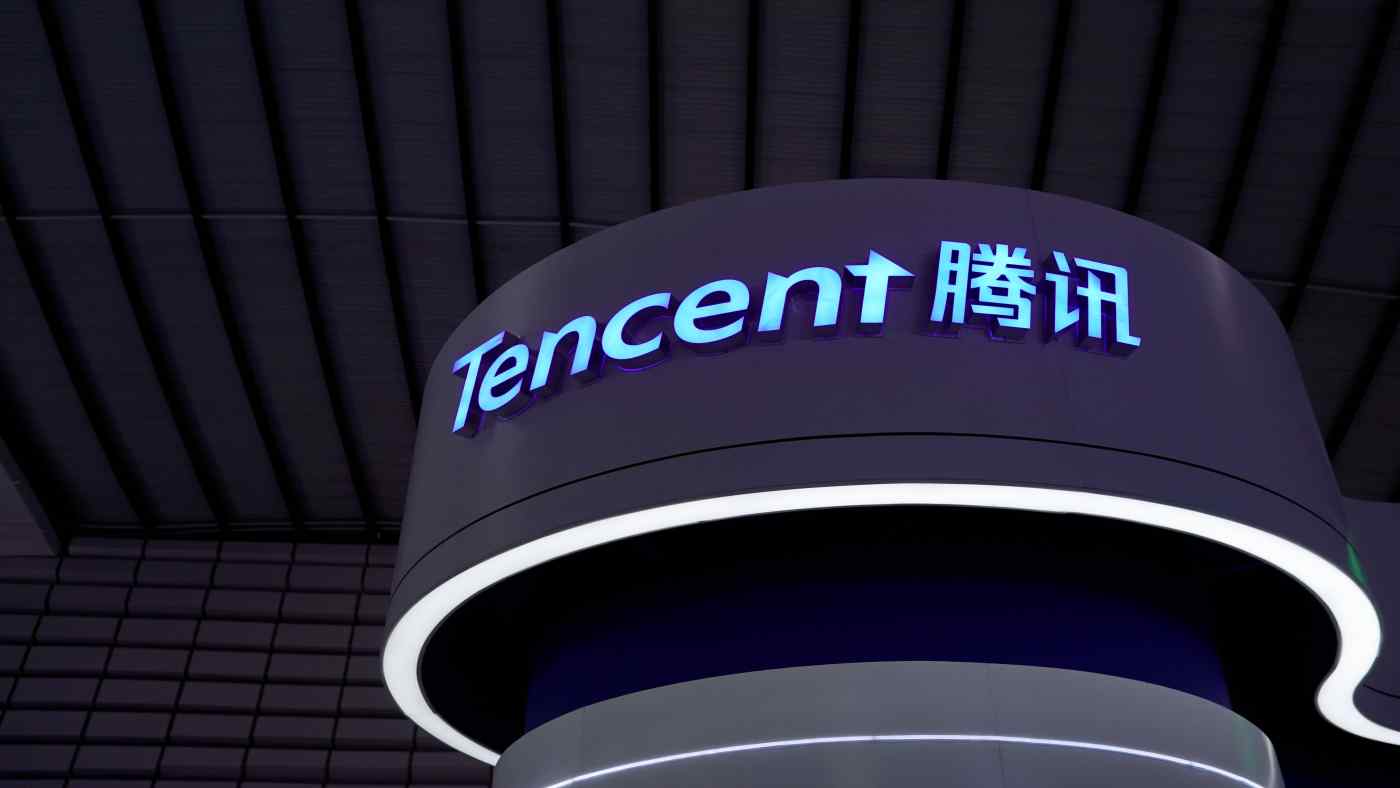 TOKYO -- Chinese authorities are cracking down harder on the country's tech titans of late, putting internet services company Tencent Holdings in their sights, after doing the same to e-commerce leader Alibaba Group Holding.

Ostensibly, regulators are focused on anti-competitive practices and protecting customers' personal information. But many observers believe the move is motivated by a desire to keep mighty IT companies in check.

Big Chinese tech players have used their monopoly power in the country's closed markets to cement their dominance. But their business models are now being tested by the recent regulatory clampdown.

Tencent's WeChat messaging service said on July 27 that it had temporarily suspended registration of new users, reportedly to beef up its information security system as called for by Chinese regulators. WeChat is a text and voice messaging app similar to WhatsApp. With more than 1.2 billion users, it has become a lifeline for Chinese. Tencent's WeChat Pay handles nearly 40% of the country's mobile payments.

The announcement by WeChat followed an order issued July 24 by the State Administration for Market Regulation that Tencent pay a fine of 500,000 yuan ($77,323) in connection with its acquisition of a leading Chinese music streaming company. Saying the acquisition enabled Tencent to capture more than 80% of the domestic music streaming market, the market watchdog told the IT giant to give up its exclusive music streaming rights.

The reprimand to Tencent is seen as part of the Chinese government's drive since last year to strictly apply the anti-monopoly law and force the company to tighten controls over personal information. 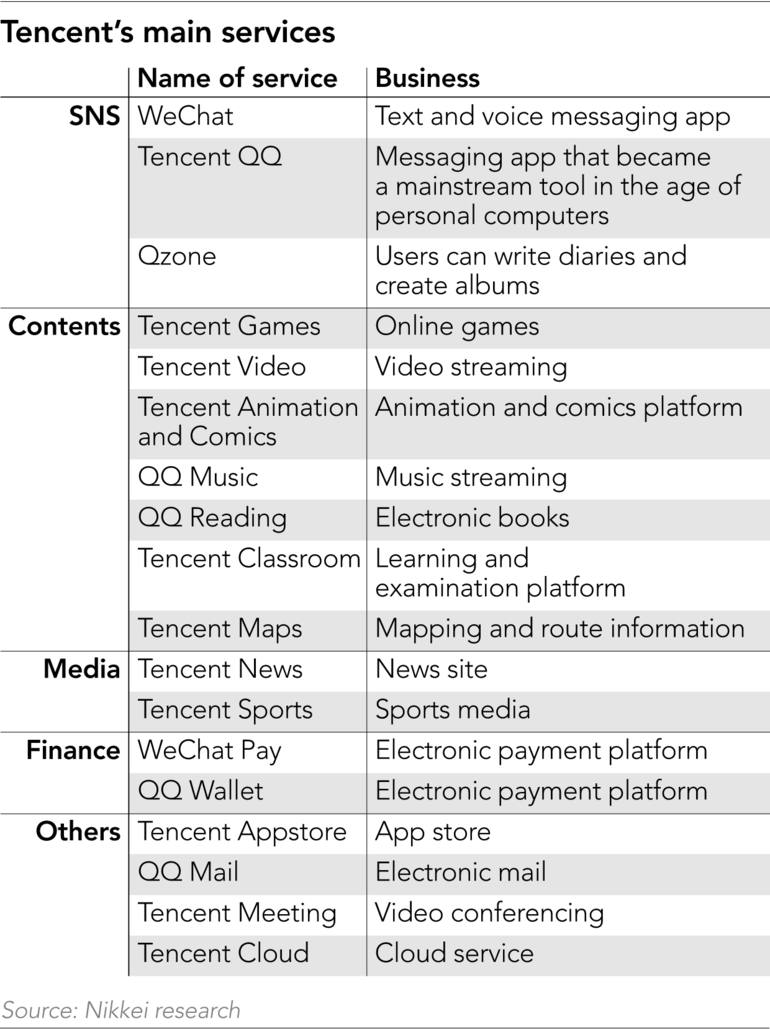 With a market capitalization larger than Alibaba's, Tencent is one of the 10 biggest companies in the world. But in the wake of the crackdown, its shares temporarily plunged more than 20% in July, wiping away $170 billion in market value.

Regulations apparently aimed squarely at Tencent were tightened a number of times in the past, and the company saw its shares decline each time. The latest swoon was the largest yet, possibly because investors regard the latest regulatory move not as a one-off but as something that will permanently undermine Tencent's business model.

Tencent is widely regarded as the world's first "super app" -- one that gives users access a broad range of internet services in a single package. This was done In 2017 by adding "mini-program" functions to WeChat for games, e-commerce, food deliveries, ride-hailing and event ticket purchases.

With WeChat functioning as a suite of apps, users can do much of their online business in one place. When they use new apps, they do not need to go through the cumbersome process of downloading them and registering themselves. Payments can also be made via WeChat Pay.

This leaves small and midsize app developers in China unable to promote their services independently; Tencent has turned these apps into mini-programs, of which there are millions. Tencent has also expanded its business scope by acquiring app developers or taking stakes in them.

Nor are Tencent's ambitions limited to the Chinese market. It has taken over or formed capital tie-ups with overseas companies in games, music, movies and other content, starting with its acquisition of Riot Games, a U.S. company known for developing a multiplayer online fighting game called League of Legends.

Its business strategy is to attract people to its messaging app, then sweeten the offering with a variety of other services. By seizing domestic streaming channels for the games and music popular with young people, it can offer them new content from the companies it owns stakes in.

Ironically perhaps, given the current clampdown, the Chinese government was partially responsible for helping Tencent and Alibaba to become super apps by, for instance, restricting overseas internet companies' access to the Chinese market.

Now regulators are having a change of heart. Having rebuked Alibaba for anti-competitive practices, Beijing focused on bringing Tencent to heel. As moves to prevent tech giants from abusing their monopoly power and force them to protect personal information gain momentum globally, China is moving in the same direction. "The two companies have grown so big that they could deviate from the Communist Party's control," according to Minoru Nogimori, Senior economist at the Japan Research Institute. "The regime probably wants to keep them under its control."

Alibaba's financial business has lured customers and funds away from state-owned banks and insurance companies, while Tencent's content business has become more influential than media affiliated with the party.

Will the empires of Tencent and Alibaba be broken up? On July 19, before the severity of the crackdown on Tencent became evident, the company said it planned to acquire British video game developer Sumo Group, reportedly for $1.27 million. There have been no media reports of Beijing intervening to halt Chinese companies' acquisitions of businesses overseas.

The government seems to have no intention of completely stripping Tencent and Alibaba of their power. The Communist Party "just wants them to expand operations within the range of its control," Nogimori said.

China has no reason to oppose domestic content companies from buying foreign players because this helps increase its influence. Tencent is reportedly attempting to buy a German game company with technology useful for military simulations. There are even fears that the competitive threat from Chinese IT companies will increase with Beijing's backing.