China's tech spending surges as it strives to be robotics superpower

SHANGHAI -- China began its decades-long economic ascent as the "workshop of the world" by taking advantage of cheap labor. Now it is spending big to swap those factory workers for high-tech robots.

The country's investment in smart manufacturing in 2018 surged 46% on the year to 69.6 billion yuan ($10.1 billion), according to Marketing Intelligence Resource, a Beijing-based research firm specializing in industrial products. Smart manufacturing employs robotics, automation and other technologies to increase productivity and cut labor costs.

The number of subsidized investments remained unchanged at 100, while unsubsidized ones doubled to more than 1,000, according to MIR.

The push is part of "Made in China 2025," an ambitious government plan to make the country a self-sufficient high-tech superpower. Robotics is a priority, as it is crucial to keeping the country's industries competitive with global rivals. The government's plan calls for raising the share of domestically made industrial robots to 70% by 2025, up from just over 30% in 2017. The demand for advanced robotics is certainly there. China overtook Japan as the world's largest market for industrial robots in 2013 and now accounts for more than 30% of global sales, according to the International Federation of Robotics. Chinese factories equipped with robots are cranking out high value-added products like cars and electronics.

The number of robots per 10,000 workers has reached one-third the level in Japan. That figure is expected to rise steadily, despite more sluggish investment brought on by China's trade war with the U.S.

CIG Shanghai, a telecommunications equipment maker, has raised labor productivity at its plant 160% in five years, according to Gerald G. Wong, the company's chief executive.

The company started automating in 2011, ahead of most other Chinese manufacturers. A fully automated, 80-meter production line in the company's factory is equipped with sensors and cameras. 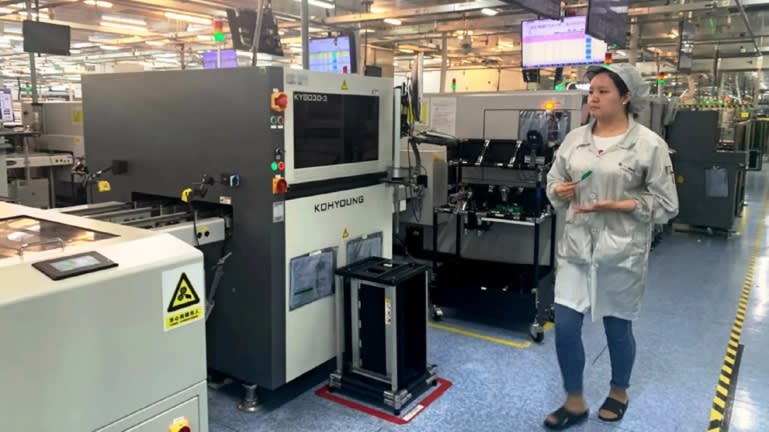 CIG Shanghai has raised labor productivity at its plant 160% in five years. (Photo by Fumie Yaku)

Authorities are still far from their 2025 target for domestic robot production. Chinese factories rely heavily on Japanese and European robot makers, such as Japan's Fanuc and Yasukawa Electric, and ABB, a Swiss automation technology giant. Foreign companies control over 60% of the Chinese market for industrial robots.

But many domestic players with competitive technologies have emerged in the last decade or so, thanks in part to policy support from the central and local governments. One rising star is Siasun, which is affiliated with the Chinese Academy of Sciences. The company develops robots designed to interact with humans in shared workspaces.

Siasun's products are "on a par with those of Japanese and European manufacturers," said Kazuhiro Kosuge, a robotics professor at Tohoku University's graduate school.

Some up-and-coming Chinese companies are focusing on low-priced industrial robots for smaller factories. Honyen, a Shanghai-based startup founded in 2014, is the country's largest supplier of welding robots.

The company's robots go for less than half the price of those made by foreign companies, according to Shi Hongwei, Honyen's vice president. To further lower costs, the company started making some parts in house earlier this year.

"Foreign manufacturers still have technological advantages, but no one beats us on price," said an executive at the company. But only a few Chinese players, supported by state subsidies, have developed the technology compete with overseas rivals. "There are only about 30 companies that can compete with foreign manufacturers to some extent," said Wang Baomin, a partner at MIR.

Lacking access to advanced technology, most Chinese robot manufacturers simply assemble devices using foreign parts. Most do not have the expertise to make key components, such as encoders, or to coordinate multiple robots for integrated manufacturing.

At present about 20% of key robot components are produced in China; the government is a long way from achieving the 70% domestic production target called for under Made in China 2025.

"It will be a difficult technological challenge," said Hiroyuki Hayashi, a director at MIR.

Local manufacturers will see their sales increase as domestic demand grows, but they will face an uphill battle against foreign rivals, especially in the market for high-end products used to make cars and electronics, Hayashi predicts. He believes the share of domestic robots in 2025 will be around 40％, falling short of 70% target.